This set was my favorite to chase on Ebay and part of the reason is because I had no idea what the checklist looked like. Topps released a list of players to be found in the product, but all the cards are buybacks and no information can be found on how many of which cards where included. As best as I can figure it's kind of like a potluck...  I'm just not really sure what Topps scrounged up to have Vogelbach sign.

Let's start off with the oldest cards first. Vogelbach had his first Topps produced cards in 2011 with Bowman draft. There are 99 of these black border cards on the left, but I've only seen three hit Ebay. There were four of the chrome version of this card produced and one of them is sitting on Ebay right now. 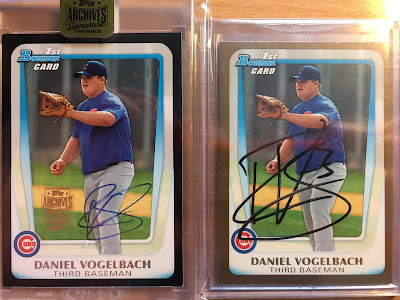 The one on the right is the gold paper parallel that I had signed by Vogelbach in person when he played for Kane County back in 2013. His autograph has become a little less detailed over the years and the V is not as easy to make out now. 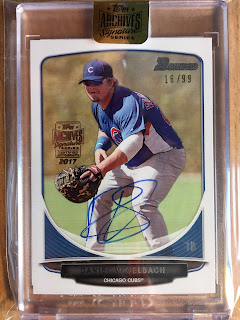 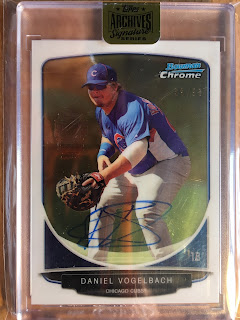 Vogelbach's 2013 Bowman base card is above on the left, which is also numbered to 99. The chrome version is numbered out of 58 and is on the right. Seems like a weird number to stop at. No? 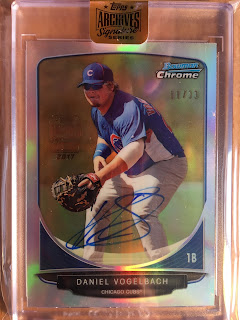 Above is the Bowman chrome refractor from the same year. There's 33 of these out there. 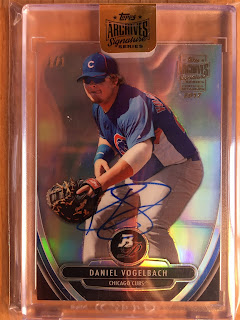 This card is from the 2013 Bowman Platinum set. There's another 1-of-1 from this very same set on Ebay, and the best I can figure is the other one is a foil board parallel or something else along those lines. 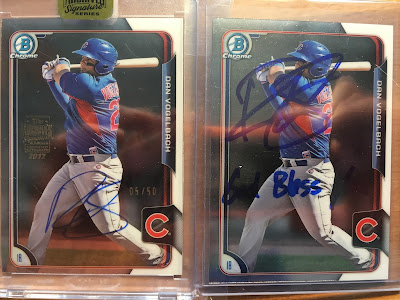 The one on the right is from the 2016 Cubs Convention where I actually had a brief little chat with The Vogelmonster for the first time. He's a swell dude.

Lots of Bowman product for Vogelbach in this set, so I made sure to pick up one of his few none Bowman cards produced by Topps. 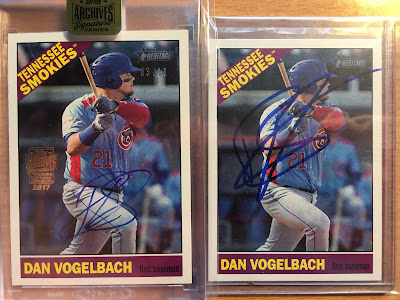 There are eleven 2015 Topps Heritage Minors cards in the Archives Signature Series set. I was lucky enough to net this one at a fair price. The one on the right is another in person autograph.

I've managed to intercept seven cards in all, but six of them have double digit serial numbers. I don't think there are any other cards in this product with serial numbers greater than ten, but I've been wrong before.

The big question is, "How many one-of-ones are out there?"

The list of "needs" are just cards I've seen on Ebay and haven't jumped on yet. Actually, as of this writing, they're all currently listed on the auction site. Four of them, combined, would cost me $280 if I used the Buy It Now option. Two of them have the Best Offer option and I've offered on one a couple of times, but the transaction couldn't be completed. One of them is a live auction and maybe I'll be able to win that one?

Again, time is my friend in this case. I'll be patient and maybe one will fall into a price range that I can justify. Besides, I think I'm the only who is a serious Dan Vogelbach super collector. So, there's no rush.

That's the last of the nineteen sets. A quick summary is all I have left and then it's onwards and upwards.