Gold Label is another higher end box break, which I can't ever see myself laying down cash for in an attempt to build the set. I'm just not that kind of collector. The base set is fairly sharp looking, but many have criticized it for getting away from its chrome roots.

Vogelbach wasn't included in the base set, and for that I'm a bit thankful. After chasing all of those parallels in Topps Chrome I wasn't exactly jazzed about the prospect of tracking down cards for Class 1, Class 2, and Class 3, each of which have three parallels. Yikes! 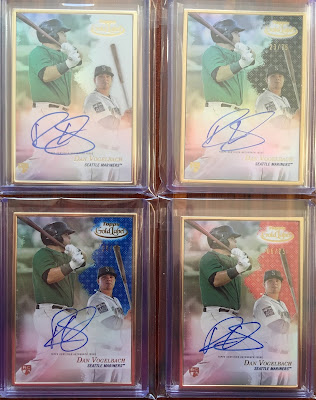 The Vogelmonster was included in the autograph portion of the Gold Label set, and I have to say, the cards look really sharp! There's a bit of a glare on the top two cards in the photo, but the bottom two really show how spectacular these autos can be: two pictures, nice design, crisp on card autos, and the cards have a thick gold framing.

Topps Definitive may have been the most ornate design, but I think Gold Label is the classiest.