In Need of Rest after Rockford 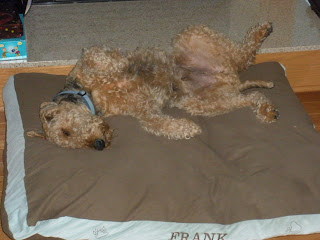 I picked Laura up from work in Princeton and we headed up to Jeff & Nichole's Friday afternoon.  The Iadipaolos and Cokers soon joined us in Rockford.  Five huge meals and five hours in inflatable bouncy house water slide contraption we all resembled Frank: "dog tired".


Saturday started with Jeff as eager as a kid on Christmas morning.
Oh, and and the outfit.  I can't fail to mention the outfit.

There was a HUGE water fight.  There were squirt guns, Max Liquidators, a five gallon bucket, and the mini pool at the base of the slide. No one was safe. I repeat, no one.


I'm not sure who fired the first shot.  But my money is the little guy holding the Max Liquidator below.  Don't let his boyish good looks or charms fool you.

All-in-all, it was a fun weekend, with good food, and great friends.  Many thanks to Jeff and Nichole for orchestrating and hosting the weekend.  It couldn't have been easy to plan, but said plan was executed without a hitch.  Well done. 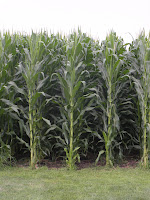 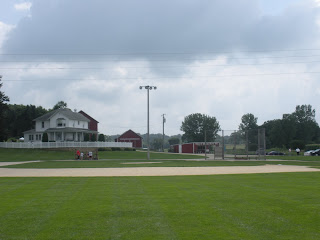 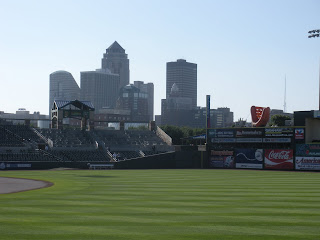 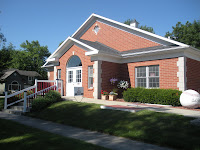 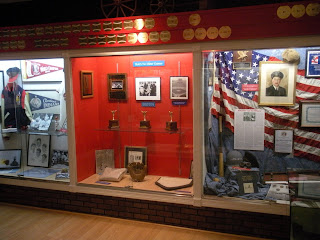 Laura and I took a trip to Hawaii.  We left on Saturday, July 9th, and we returned on Sunday, July 17th.  It was a wonderful vacation and much of that can be attributed to the gracious generosity of Aunt Julia and Uncle Bob, who housed us, fed us, and loaned us their SUV for the week.  All the amenities of a 5 star bed-n-breakfast, and then some!  Thank you so much, Aunt Julia and Uncle Bob!

On to the trip and some pictures! 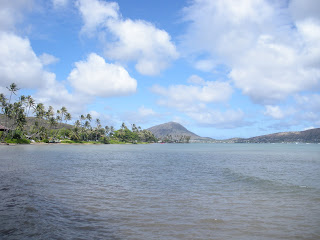 Ocean, palm trees, and clouds... ahhh...   Hawaii is so beautiful!  Temps were in the mid 80's and the winds were consistently 15-20 mph.  Just gorgeous weather!


A rainbow!  Hah!  It rained on and off pretty consistently, but we didn't see our first rainbow until the second to last day! 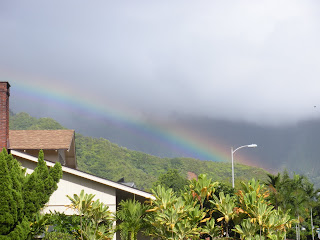 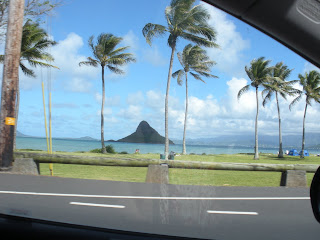 Chinaman's Hat with palm trees whizzing by.  So many things to see and so little time! 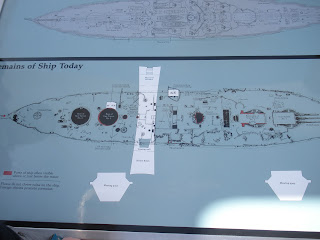 Here's a diagram of the memorial that rests atop of the USS Arizona.  We visited the memorial and were able to see parts of the ship beneath the water.  Quite an educational and humbling experience. 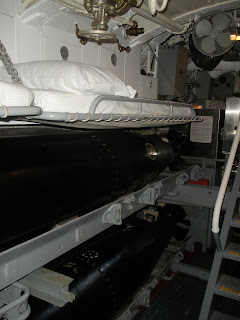 We visited the Bowfin, a submarine at Pearl Harbor.
Seamen used to sleep on torpedos?  Whoa.

FYI: submarines are not meant for anyone over the height of 5'6". 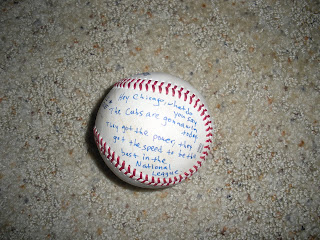 A few lines of "Go Cubs Go" scribbled on a baseball. 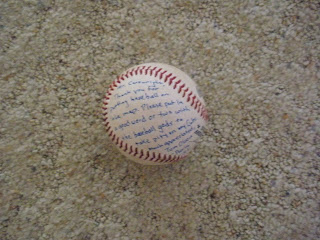 The other side of the ball: A plea to Alexander Cartwright to have some good fortune fall upon my Cubs. 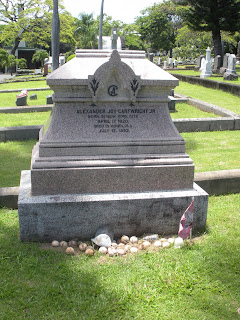 The ball was placed at Cartwright's grave next to numerous other baseballs.  For those not in the know, Cartwright is given credit for inventing the great game of baseball.  I figure if anyone has pull with the baseball gods it would be this guy.  Worth a shot, right? 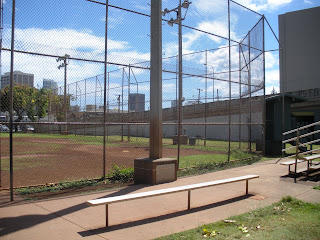 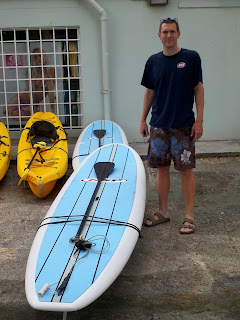 Stand Up Paddleboard... quite a work out!
I did great in the channel, but I fell FIVE times in the ocean.  Laura only fell ONCE.  She has mad paddleboarding skills. 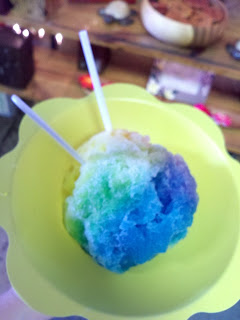 We tried the Shave Ice at Aoki's (my favorite), Matsumoto's, and Island Snow (where Obama gets his shave ice).

It is served with ice cream at the bottom with azuki beans upon request.  Laura's not a fan of the azuki beans. 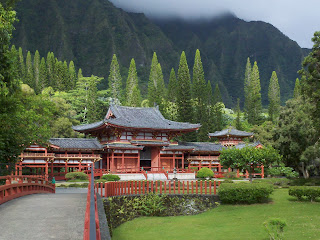 Temple!  Not one nail was used in its construction.  It was surrounded by a moat filled with... wait for it... koi!  You thought I was going to say 'alligators', didn't you! 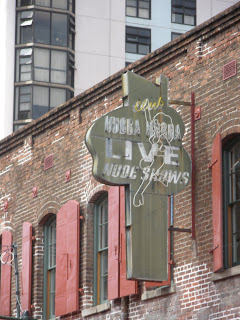 Aunt Julia volunteers her time, as a tour guide, at the Hawaiin Cultural Center in Honolulu.  She gave us a tour of China Town.  We stopped in a few bakeries, shops, and markets.  We did not stop here; the sign is protected by the historical society. 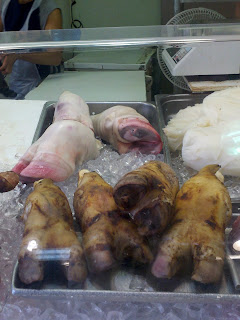 I'm sorry we stopped here.  Man, China Town has it all. 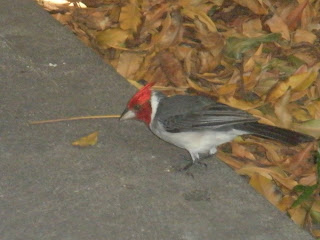 For the bird lovers! You know who you are! 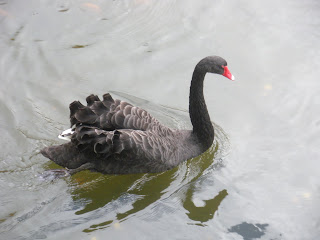 A Black Swan.  This one was patrolling the moat at the Temple.

Those are just some of the highlights of the trip.

We also enjoyed food at a Korean restaurant, went to two botanical gardens, climbed to the top of Diamond Head, traversed a trail to a fantastic waterfall, visited Punch Bowl, got stuck in traffic on the North Shore, had fish tacos, ran on the beach (4.65 miles barefoot!), had jumbo shrimp sold out of a van, got stuck in Shark's Cove, saw a blow hole in the rock along the ocean, dabbled with kimchee and Spam Musubi, drove through Dole's pineapple fields (not literally), and generally had more fun than a couple should be allowed. 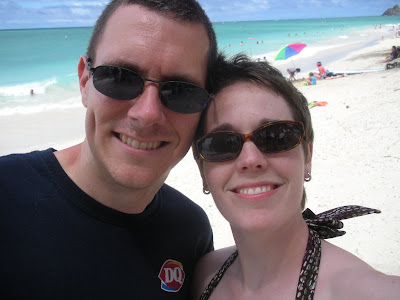 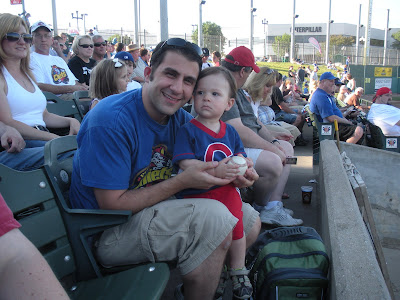 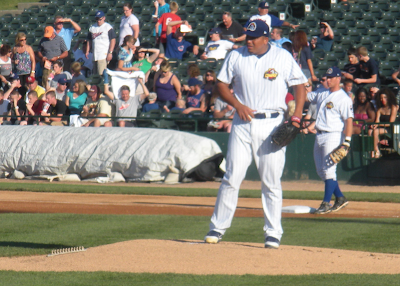 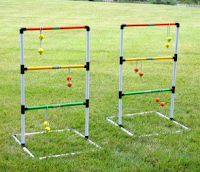 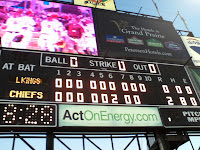