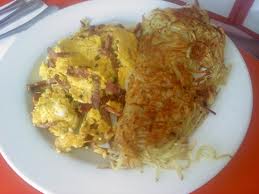 Well, I've been involved in spring sports as either an athlete or as a coach for the past twenty springs.  No coaching gig for me this spring so I was finally able to take advantage of spring break.  Laura and I left for Arizona on a non-stop flight out of Peoria on Saturday night and returned this past Wednesday.


We started out by eating at Matt's Big Breakfast in downtown Phoenix, which was featured on Diners, Drive-ins, and Dives.  If you have the time, the five minute video will be sure to make you salivate!  I had the salami scramble with hash browns.  Yum!

We headed off to Chase Field, the home of the Arizona Diamondbacks, to take in a game.  Overall , it was a very nice facility: clean, spacious, good seating, and cheaper than Wrigley.  The roof was close and the AC was cranked... and dare I say it, I believe Laura may have been a little cold.  The pick to the left is what the ballpark is known for, but no swimming for us.  You need reservations! 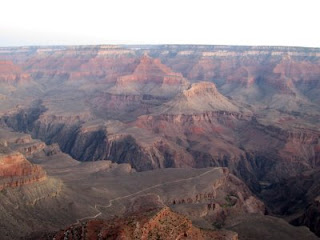 After the game we headed for Prescott to stay with Laura's cousin, John. John's a cool cat.  He has a fixer-upper for a home, but he's doing it his way, and it's going to be quite a bachelor pad.  Laura and I were able to lend a hand, and I was even able to fix a leak under his bathroom sink.  We put 700 miles on our rental car with John as our tour guide.  We saw the Grand Canyon (admittance was free this week), and even walked down a third of a mile or so.  If you have never been to the Grand Canyon, it is HUGE, 273 miles as the river flows and worth the trip!  The picture simply does not do it justice.

On the way home we stopped by Flagstaff, which was a pretty cool town, literally and figuratively. We saw snow along side the highway... in Arizona!  Weird.  The next day we drove through Sedona and Jerome.  Sedona could easily be one of the most attractive towns I've been too, and Jerome is by far the oddest.  The town of Jerome is built into a mountain side, and it's main streets are switchbacks.  Houses and stores are built either into the mountain or hanging off the edge of mountain.  Very touristy, very cool.  The picture is of the former jail... obviously, gravity won out here.

I was even able to get some running in.  Every mile counts as I prep for my half-marathon.  I will say that the elevation kicked my butt in Prescott and I can understand why world-class athletes train in Colorado.    Great trip overall!
Posted by P-town Tom at 4/22/2011 07:25:00 PM 2 comments:

Email ThisBlogThis!Share to TwitterShare to FacebookShare to Pinterest
Labels: vacation

The Cubs Are Helping Me Cook 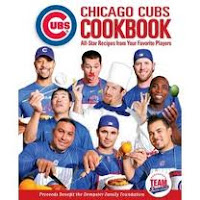 Grandpa gave me this cookbook last fall and I had the wild idea that I would make every recipe.  I think that may have been a bit ambitious, and I have since backed off my original proclamation. I will now poll Laura, or whomever I am cooking for, before getting started in the kitchen.

This past Wednesday I made Sean Marshall's girlfriend's mother's meatloaf.  Delicious.  Simply Delicious.  The recipe made two loaves: one is in the freezer for another night and the other was devoured.

I'll post another recipe from the Cubs Cookbook when the mood strikes.

Also look for other posts involving my updates on our home, our trip to Arizona, co-ed softball, and other fun tidbits.  In the meantime I'll leave you with a picture of the meatloaf.  Perhaps if I could get Mr. Marshall to autograph our frozen one, it might catch a fair price on eBay?
Posted by P-town Tom at 4/15/2011 08:23:00 PM 6 comments: