2017 Heritage featured my second favorite design from the 1960's, behind the 1966 set. I've always referred to this set as the "burlap" set. Anyone else?

First of all, I should mention Vogelbach's Heritage card is my second favorite card of 2017, behind the Topps Now card shown in the first edition of this series.  Again, a great design and a solid picture. 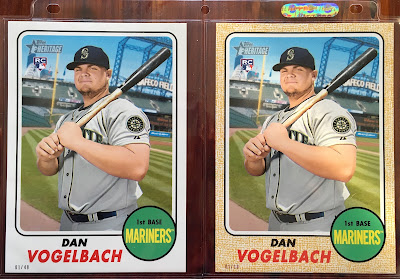 The two cards above are the over sized 5" by 7" cards. I don't know if it's the camera angle or what, but don't the Vogelmonster's biceps look huge?

I bought into a case break of Heritage through Ebay, but I didn't really luck into anything special other than the chrome parallel numbered to 999, which is the middle card in the picture below.  I have quite a few base cards if you need one! 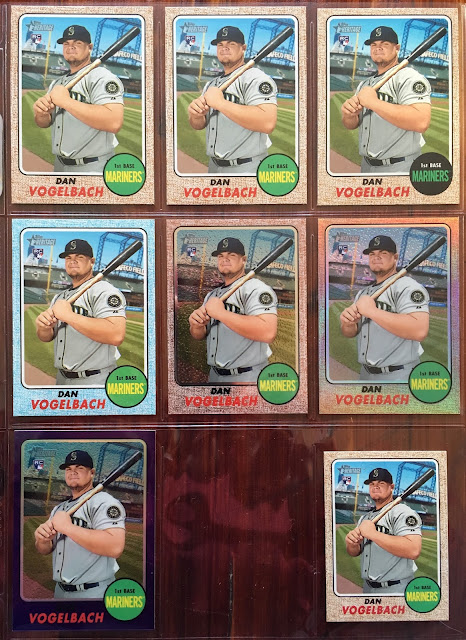 The top middle card is the yellow back variation, thus the reason it looks like a duplicate.

I missed out on a couple of the cheaper color swap variations, but eventually I found one in my price range. It turned out the Ebay seller lives just a few blocks from me! It was the quickest delivery ever, less than one day, and it went from $3 shipping to free. Nice! The color swap variation is the card in the top row on the right.

The hole in the bottom middle is now actually filled. I had been watching the blue chrome parallel (#/68) for a few months and finally decided to pull the trigger after I snapped pictures of all the cards in early November. I was too lazy to go back and take another snapshot.  Maybe I should remedy that. 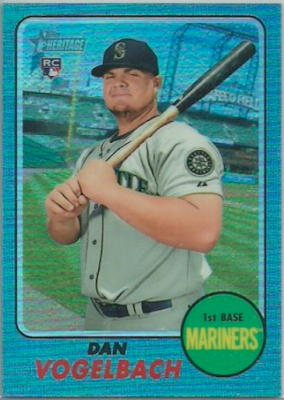 My sister gifted me a Paypal coupon, which made the price much more tolerable. Thanks, Jane! 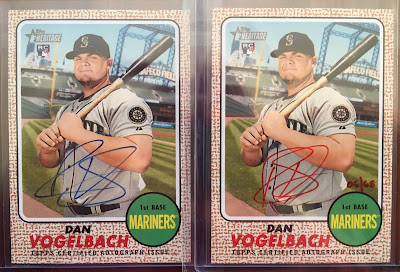 I was a little shocked at how expensive the Real One autos were going for. The blue ink auto came down in price after a couple of weeks and I pounced on one for $5 shipped. Good deal.

The red ink autos (#/68) are still going in the $15 to $20 range to this day. Once I figured out the price wasn't going to come down anymore I finally took the plunge. What's weird is I've been able to purchase many lowered numbered autos of Vogelbach before and since then for a fraction of what I paid for the red ink auto. I'm not sure why that is... maybe it speaks to the popularity of the Heritage brand?

I have only seen one of the four needed cards. No, I did not pull the trigger.

As you can see, above, I use the note feature when watching expensive cards to keep tabs on price movement. I'll note the 2nd, 3rd, and successive price listings and maybe if it gets low enough I'll make an offer or buy the card. This card went unsold and it hasn't reappeared since. So it goes.

I never was a real fan of Heritage. Why did we need to rehash old designs?  That changed this year with my Vogelbach chase. I don't know that I'll ever bust a box, but it looks like a fun rip with all the chromey cards, variations, parallels and autos.

For what it's worth, I think I can close the book on my 2017 Vogelbach Heritage collection.