Running into a New Year

Okay, so I didn't meet my goal of finishing a half marathon in less than 2 hours this past year.  No biggie, it's not for a lack of trying, and now it's something to shoot for in 2012.

I did complete my second obstacle course race in my history.  And I did it with friends!

This year I've found something even more up my alley than an obstacle course...a 5K/eating competition!  There's a relay race called the Dine N' Dash in the Chicago suburbs that has each participant run a 5K then polish off local dishes before he member of your four person team may start their leg of the race.  This one is on April 28th, is limited to only 80 participants, and should be an absolute blast.  I'm going to try my best to register and be one of the first 80 to do so.

This past year I also managed to log over 300 miles in a calendar year for the third time in the last four years.  Not bad for a guy who doesn't really consider himself a runner.  Even better when you consider I don't ever really run between Halloween and Valentine's Day.  Many of those 300 miles came when I trained for my first half marathon.

Here are the options for this year:

RACE A: I can't start training until after my basketball coaching duties are off, so the first race on April 7th may be too early for me. I'm not crying over that one, because I shudder at the thought of a hilly race couse that is 13.1 miles long.

RACE B: The race in Champaign is the same day as the aforementioned Dine N' Dash.  Boy, I hope I'm able to be one of the fist 80 registrants!  I'm not a fan of crowded race courses.

RACE C: This one is the Saturday before my high school's graduation, which my attendance is mandatory.  Sitting in a car for 2.5 hours and then running is not the best of ideas, so add in a night's stay in Quincy.

RACE D: No conflicts with the date, small number of racers, and a relatively flat course.  Plus, I would probably be able to stay with my BFF and maybe even have a couple of other friends run the race with me.

If you're interested in running a half marathon or training for one with me please give me a shout in the comments!

Email ThisBlogThis!Share to TwitterShare to FacebookShare to Pinterest
Labels: running

Cashing In on eBay

I've been a member of eBay for a little over 12 years now.  I've purchase many items from what I affectionately call, "The World's Garage Sale."  When students leave items behind in my classroom I've even joked around about selling the lost items on eBay if they aren't claimed.

My purchase count is up over 200 items.  Here's a short list of the types of items that I have won in the last year alone:
I usually "watch" items for a while to get a feel for their price and then I strike in the closing seconds of an auction that is undervalued. I even will search for items late at night as an attempt to "wind down" before going to bed.  Sometimes that backfires though as I can lose myself for more than hour at a time.


Anyway.  I sold my first item.  I redeemed a diamond embedded baseball card this year as part of one of  Topps 2011 promotions.  (Yes, I'm 34, and I still collect baseball cards. Get over it.)  All attempts to trade the card for a Cub were rebuffed and I decided it might fetch a fair price on eBay.  Here's my first listing: click here. 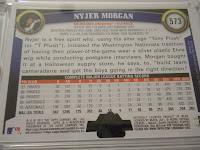 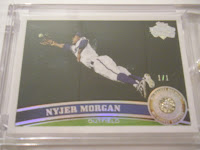 The card sold for $147.  Not a bad catch, but not near the haul that my sister claimed with a similar card.  Overall, it was a good experience and now I'm considering what other possibilities I might be able to sell on "The Bay."

Perhaps the extra unused SUP pump?  We don't really need two.
We have 14 pairs of 3D glasses that came with our new television.  Um, yeah, that's ridiculous.
I could try selling more baseball cards.
Or perhaps I could make and sell coasters!

What? Coasters?  Yep.  I've made two sets of two so far.  The first set was a pair of the pictured Atlanta Braves as a thank you to a baseball card blogger who sent me some really cool Cubs cards for my table.  The second set was a pair of Cubs that I gave to a good friend as a Christmas present.  They are made out of the same epoxy resin that I used to make my table and are pretty nice.  The second set turned out much better as I tweaked my technique. 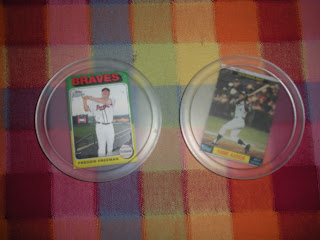 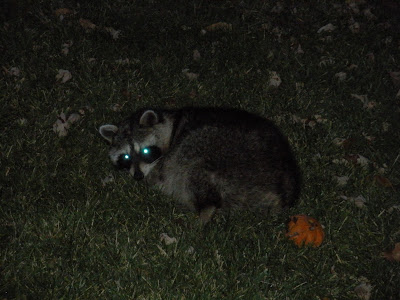 I tossed him a corn cob and went back inside.  I had toast to make.  Laura needed to go to work and offered to make her toast!  This is not a time to play with raccoons!
Five minutes later he tried to eat the gourd nearest him.  He never approached the corn cob.  He’s now sleeping in the pine tree.  He's lucky that I'm so dedicated to toast making.
Posted by P-town Tom at 12/29/2011 09:33:00 AM 1 comment: