I absolutely love this time of year.  Spring is knocking on the door, the days are becoming longer, and temperatures in the 50s are more of the norm rather than the exception.

I love preparing for my fantasy baseball drafts and I'm starting to look into tickets for a couple of baseball trips this summer.

Reading about the Cubs is a daily ritual for me.  The rotation is full of a bunch of #3, #4, and #5 starters.  Who will win a spot?  No one knows.   Everyone wants the hot prospect, Brett Jackson, to make the team.  But where's he going to start?  The new manager, Dale Sveum, has put together a March Madness-esque field of 64 bunting tournament AND he defeated Kerry Wood in the first round.  Crazy.

Then I came across this picture.  I guess it was Photo Day at Fitch Park in Mesa today. 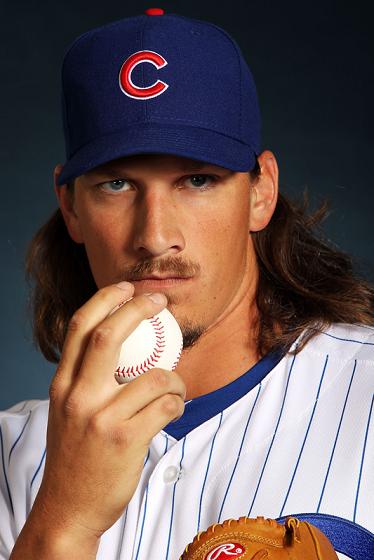 Seriously?  Where are my clippers? 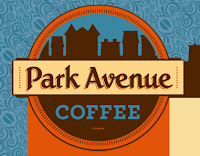 Monday morning was the final day of three in St. Louis.  We checked out of the Moon Rise and headed into the heart of the city.  Our first stop was breakfast at Park Avenue Coffee.  It was a cute little coffee shop that is known throughout the area for its gooey butter cake.  They boast 76 different flavors, but they only had about 8 on hand that morning.  I had the white chocolate raspberry butter cake.  It was like eating dessert for breakfast: absolutely scrumptious!

Our final stop was the City Museum. This would be our third stop at a museum in three days. Meh.  Laura had this stop planned for us since day one, and the bartender at the Moon Rise Hotel had suggested it to us. (Bartenders aren't ones to usually suggest going to a museum.)  So, maybe this museum was different?  Oh, was it ever!

First, it cost $12 to get in; the other museum for free.  Second, we were greeted by a gentleman a couple of generations older than us and he was more than willing to give us a quick run down of what the museum had to offer.  "Caves and tunnels are over there, and when you get to the center, look up!  You'll see the 10 story slide above you!"

Um, okay...  So, this museum requires practical shoes to make it through caves and tunnels that are centered around a 10 story tall slide?  I would have paid twice the price of entry for this opportunity!

So, I quickly found that I couldn't fit every place that Laura was going, and I fit in even less places than the people a third of my age were managing to squirm their way into.  Whatever.  I still had fun, and I went down the big slide TWICE!  Heck yeah!

On one of the other floors there was an actual museum.  Everything from gargoyles to insect collections were to be found.  Below is a picture of a doorknob collection. 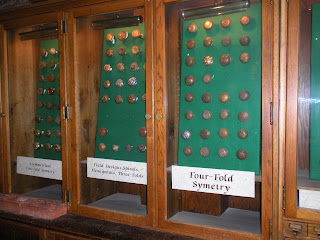 Another section had a carnival like atmosphere to it. Games, carnival advertisements, fortune tellers, and the like were everywhere.  Below are a couple of my favorite signs. 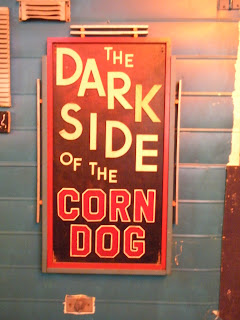 For the record, yes, we enjoyed corn dogs for lunch! 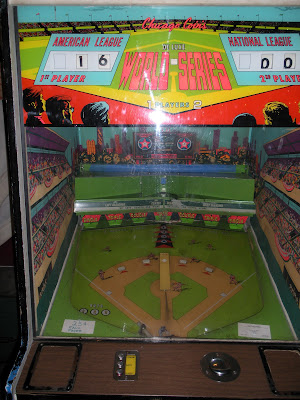 Overall, I would give City Museum a 9 out of 10 on my rating scale.  It would have been perfect, but I couldn't fit everywhere.  I guess if I were between the ages of 8 to 12 it would have been a sure fire 10.  The hundreds of kids there seemed to think so at least!

For the record...   Laura is a top notch vacation planner and may have swayed my opinion a bit on the St. Louis versus Chicago debate.  That being said, St. Louis is O.K.  It took a lot of strength for this diehard Cubs fan to type that last sentence.

Actually, it was easier to get around than Chicago.  The Loop, park, and City Museum compare favorably to what Chicago has to offer.  The company though, well, that just couldn't be beat.

Sunday morning started off with breakfast in the Moon Rise Hotel's restaurant, the Eclipse.  Biscuits and Gravy!  Heck yeah!

Laura and I made our second trip to Forest Park. Once again, this place is absolutely gigantic, and by the end of explorations our feet were certainly barking. 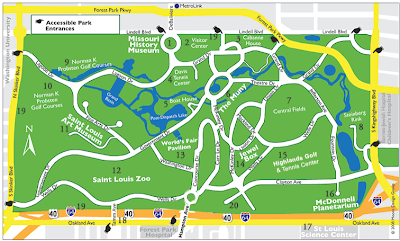 First the Jewel Box, which had two weddings the day before and now was the photo shoot for a family picture.  Bromeliads were in abundance.

The zoo was our next stop.  Many of the outdoor animal exhibits were vacant due to the cold seasonal temperatures. We were able to see about 10 different animals, including the following: 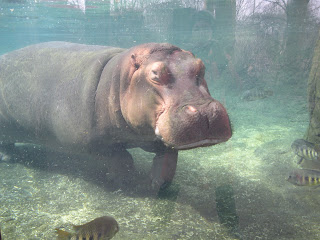 Our next stop was at the art/history museum.  Lots of art... paintings, sculptures, and other mixed media pieces; another floor revealed armored suits and mummies. 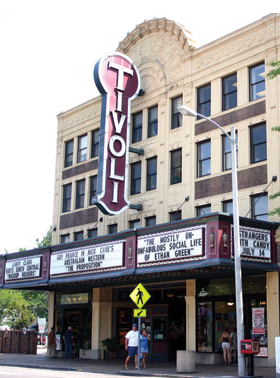 We walked back to the Loop and took in the Oscar "Shorts" at the Tivoli movie theater.  The Oscar "Shorts" featured five different films, all thirty minutes or less, that are up for an Academy Award on February 26th.  Personally, I enjoyed them all, but if I had to vote it would be for Tuba Atlantic.  I believe they are showing the "Shorts" at Landmark if you're interested.  I'm going to look for them in the future.

After the movie we walked down to Pi.  Best dining experience of the weekend.  First, in my opinion, our waiter took really good care of us.  Second, he helped me find a beer that REALLY suits me and my tastes: Schlafy's Pi Common.  No one on BeerAdvocate's website seems to agree with me, but I'm okay with that.  Third, Pi has some really nice appetizers, and Laura and myself enjoyed the winter caprese and the roasted vegetable bruschetta.  Fourth, Pi's specialty is pizza!  Yes!  They have thin crust and a deep dish that resembles Chicago style pizza.  We enjoyed the Cherokee Street pizza in deep dish form... baby spinach, chihuahua cheese, roasted red peppers, red onion, chorizo sausage, goat cheese and dusted with crushed red pepper and chili powder.  Yum! 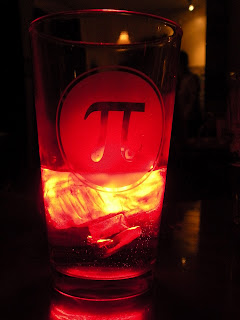 Oh, here's where it gets really good.  Our waiter apologized a couple of times for keeping us waiting, which in all actuality wasn't really that long at all.  I mentioned to him somewhere in the middle of the dining experience that I would like to purchase a couple of their pint glasses, but it slipped his mind when he rung up our bill.  Next thing I know we're walking out of there with three free pint glasses.  Nice atmosphere, very personable waiter, delicious food, discovered a new beer, and free glasses!

Coming Up for Air in St. Louis

As a teacher I get about eight weeks off during the summer on average.  That lengthy vacation may sound pretty awesome, and while I tend to agree, it doesn't come without some catches.  For instance, I just finished my sixth straight week of working 60+ hours.  This isn't the first nor will it be the last time that I put myself through such a schedule.  To be honest, it's not all that bad when you're in the middle of it: I really enjoy my job and that helps a ton.  On the flip side, I severely short myself on seeing my family and friends, but they're really great about it.

Anyways, basketball was the time hog this time around. My girls freshmen basketball team finished with 5 wins and 17 losses.  It was a rough year and I only had seven players for a good stretch in the middle of the season after two of my better talents were moved up to the sophomore level.  We did win out last game of the year though!  The varsity basketball team started four sophomores and a freshmen in the regional championship game Thursday night and lost.  Better days are ahead for that young group!

What's that? Basketball is over?  Laura and I packed up and headed down to St. Louis Saturday morning for a get away weekend, which I think she needed just as much as myself.

A little under three hours later, we found ourselves in the heart of downtown St. Louis to have lunch at the Terrace Cafe, which overlooks City Park. Unfortunately, the cafe was closed for the season, but that didn't stop us from having fun with the camera. 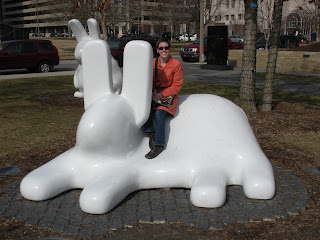 After doing a loop of the park, about three city blocks in size, we jumped back in the car to find something to satisfy our appetites. 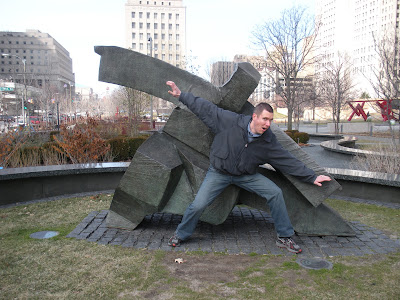 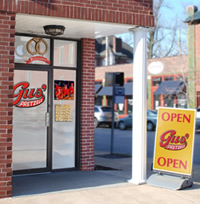 Enter Gus’ Pretzels.  For about $6 we were able to fill our bellies with pretzel-ly goodness… garlic & butter, cinnamon and sugar, traditional, and pretzel endz with dipping cheese.  Yum!
Off to the Contemporary Art Museum.  What's that?  The museum is free on the weekends?  Nice!  The art was... um... different.   I just don't understand it.  My mathematical mind had a tough time grasping the meaning of many of the pieces. 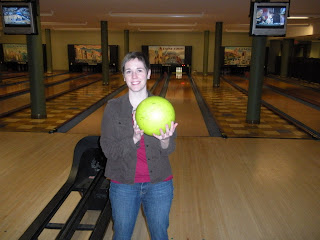 Next!  Bowling in the heart of St. Louis University's campus at the Moolah!  This place was really cool.  Eight lanes and a bar in the basement and then a really large theater that ditched the normal seats for leather love seats!  Really cool, and I would have liked to take in a movie if we had the time.
We checked into our hotel not too long after our trip to the Moolah.  The Moon Rise Hotel didn’t have our room ready, so we were given a couple of cards good for drinks at the hotel bar.  Score! 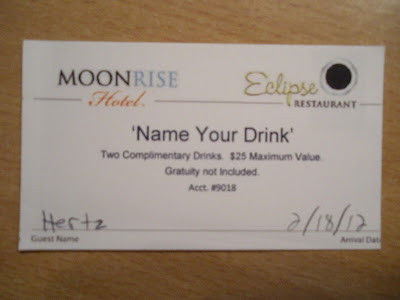 After settling into our room we took a long walk around Forest Park, which is the largest urban park in the United States… yes, even larger than Central Park in New York.  This park has eight baseball diamonds, nineteen tennis courts, twenty-seven holes of golf, an amphitheater, an art/history museum, and a zoo!  Yeah, pretty big! 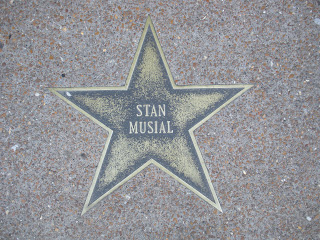 Blueberry Hill was our next stop.  On our way there we walked along the Loop and were able to see many celebrities' bios and stars along the Walk-ofFame.  Here is Stan Musial's star for all of my loyal Cardinal fan readers out there.
Joe Edwards pretty much founded what is known as the Loop.  He is the owner or the Moon Rise Hotel, Blueberry Hill Restaurant, Pin Up Bowling Alley, and the Pageant, which is a major music venue.  He co-founded the business district in the Loop and is responsible for the Walk-of-Fame.  Here's is Joe's bio and accomplishments.
Dinner was in the world's biggest eat-in man cave.  Seriously, this place had more collections in one place than I have ever seen. (Click this link, I dare you!)  Mr. Joe Edwards is quite the collector!  The atmosphere was pretty good, the service was average, the wait was tolerable, and the burger was just okay.  An okay place overall, but nothing special, unless you're looking for ideas for your man cave!
After dinner we headed back for the hotel to catch up on some much needed rest.  Except... uh oh... I discovered the TV had the MLB Network.  Yikes!