A PWE with a Mysterious Pitch Grip

Here's another quick PWE as I continue to forge through the mailings from September to reclaim my desk.

Jim, the author of cards as i see them and renowned lower case user came across a quartet of cards from 2020 that fit ever so perfectly into my player collections.

These two represent the first two cards I've been able to add to my Kerry Wood collection from the 2020 collecting season. With the use of lower case letters for the player name on the front I wonder if Jim is partial to this year's Stadium Club release. 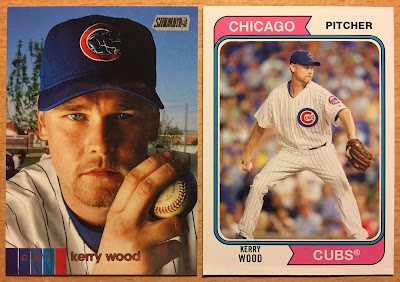 For the record, I really like the photo Topps used for the Stadium Club card. It has a bit of a Donruss Studio feel, which is perfectly fine with me. I'm curious about the pitch grip. Could that be a cutter or maybe how he gripped his four-seam fastball? Usually the grips for breaking pitches, which is what Kid K was known for, have the fingers placed with the seams, not across them as in this picture.
Vogelmonster! 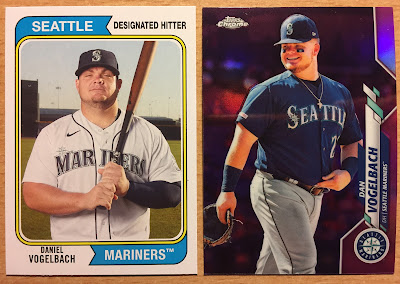 I think this is my third copy of the chromey pink parallel, yet I still needed the Archives base card. It's funny how things like that shake out sometimes!
Thanks for the cards, Jim. I'll send something back your way before too long!
Posted by P-town Tom at 9/28/2020 05:17:00 PM 3 comments:

I've fallen a bit behind in posting trade packages, which is typically the case when school starts back up, but this year, obviously, has been a bit different.

So, why not kick things off with a PWE from everybody's favorite Zippy Zappy? In my mind's eye, this is very appropriate as Kenny has been concluding his posts with the following reminder:

Please remember to wash your hands, wear a mask when outside your house, maintain a safe distance from others in public, stay informed with the latest COVID-19 updates provided by the CDC and other appropriate authorities.

Yep, we did a lot of that during my eight week junior high softball season this year. I could go on and on about the differences this year, but here's the biggest ones:

Honestly, I'm just glad we were able to play and play without logging a positive case. We lost a handful of players during the course of the season who were "exposed" to students who had contracted the disease, but aside from the random quarantines, Covid never really hit us. I'm so very thankful!
Also, a big thank you to all of those who sent positive vibes my way!
Alright, enough chatter about the reason 2020 will go down in infamy. Let's look at some cards!
It's looks like Kenny was able to track down some Topps Chrome. I know where most of the retail Chrome in my area wound up and I'm not happy about it. Perhaps I'll save that as fodder for another post. 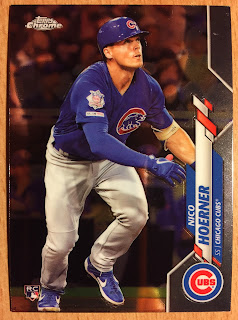 Jorge Soler, to me, is the one that got away. I never could figure out why the Cubs signed Jason Heyward to that monster deal when they already had a young, controllable stud on the roster. 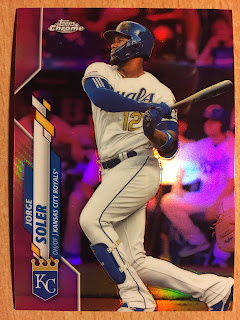 When healthy, Soler is a beast who can hit bombs in bunches like he did in 2019. When hampered by injuries, which is often, he's a below replacement level player. Heyward, to his credit, has continued to work hard on his offensive game while playing sterling defense in RF. He also gets bonus points for being a plus-plus teammate.

The above pink parallel will find its way into a binder with the rest of my Soler cards. 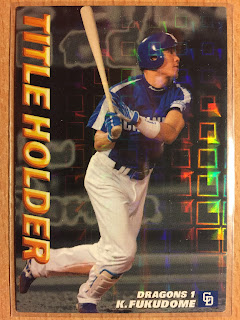 This is a 2007 Calbee Title Holder insert, from Japan. of Kosuke Fukudome. This card has the shininess factor of Topps Chrome and a cool holo-design in the background. Most spectacular! For those counting at home, this is the 190th unique Fukudome in my collection and quite possibly the first Fukudome I've added in over a year!

Kenny, thanks for the PWE. I believe that's two you've sent me now without me reaching for a postage stamp. No worries, you're on my list and I will return in kind.

Stay safe and thanks for reading.

Do You Put Off Today What You Could Open Tomorrow?

Have you ever put off opening a package because you know what's inside and you want to wait for the right moment?
I thought about saving this one until I needed something to cheer me up after a bad day at work.
Then I decided it might be better served as a celebratory package, if, in fact, I win one of my two fantasy baseball leagues.
Five minutes ago all of that was thrown out the window, "Heck with it. I can't wait any longer!"
Uber-generous Julie, from A Cracked Bat, reached out to me a couple of weeks ago after she pulled a card I blogged about NEEDING to add to my collection. After picking her pockets she sent everything in a padded yellow mailer. 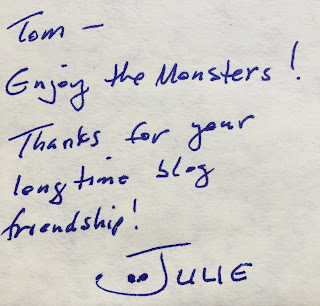 Enough delaying things... let's get into it!
Here's the first card I picked from Julie's pockets. It's the cracked ice version of Alexander Cartwright's card from Panini's 2012 Cooperstown set. I once placed a baseball on Cartwright's grave in Hawaii back in 2011. On it I wrote to Cartwright, the "inventor of baseball," and asked him to talk to the Baseball Gods about granting the Cubs a World Series championship. 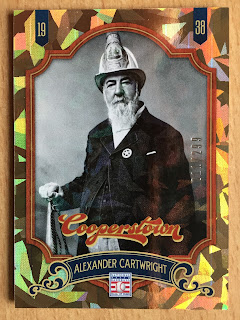 I'm not saying my gesture had anything to do with what happened in 2016, but I'm not saying it didn't either!
Super Szczur! This former Peoria Chief and all around good dude will always be one of my favorites. 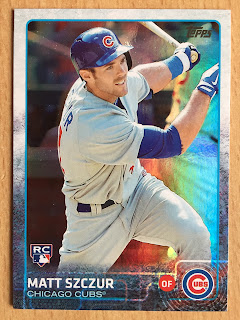 I don't remember claiming this one from Julie's stash, but I won't argue either. It's a framed 2020 Diamond King of El Mago! 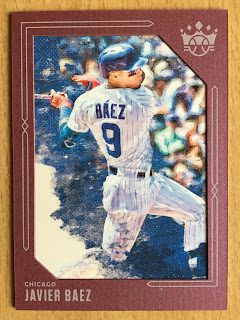 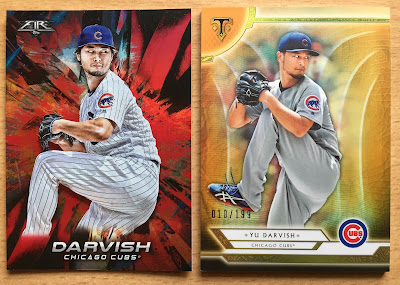 For the record, that's a 2018 Topps Fire card on the left and a Triple Threads card from the same year on the right.
Here's where it starts to get crazy good. 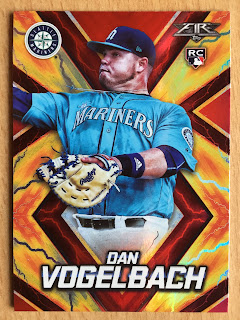 That's a rookie card of the Vogelmonster from 2017 Fire.
Then, wow. Just WOW. 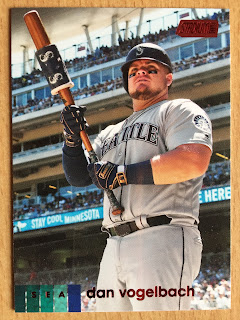 It's the red foil parallel of everyone's favorite super slugger from 2020 Stadium Club.
Can it get much better than that?
In a word? Yes.
Behold! 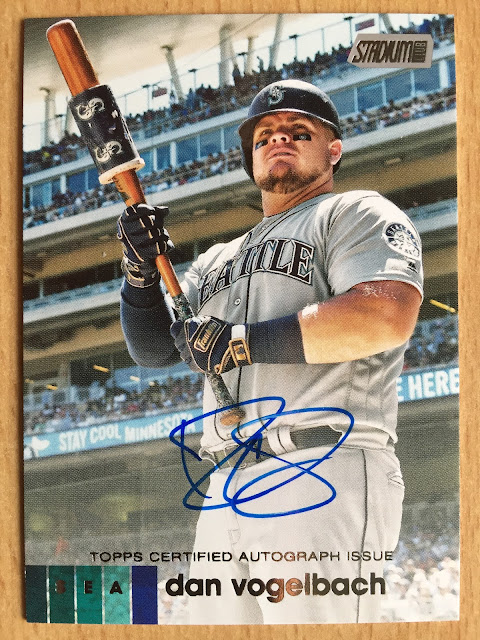 There is so much goodness on this autographed card I don't even know where to begin. Everything from the bat grip, to the eye black, to the bat weight, to the camera angle, to the stadium seating in the background is just so perfect.
That's a great looking card right there. I couldn't be happier!
Thanks for cards, Julie! I'll be sure to send something your way when I can find something close to that Vogey auto that fits in your collect, but that's going to be a tough task!
Posted by P-town Tom at 9/20/2020 06:06:00 PM 6 comments:

I Needed That Filler Card

Most of the Vogelbach cards in my collection have come through Ebay or Sportlots purchases. Most of the time I don't write a blog post about them unless something really strikes me.

When opening today's mail this beauty dropped out. 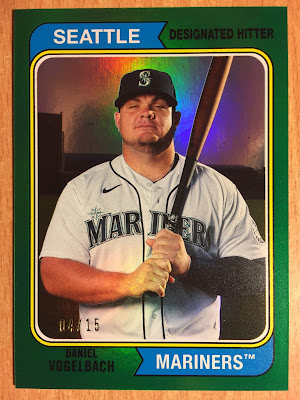 I think this will be my last go around of chasing all of Vogelbach's parallels and I'll stick just to the base cards, relics and autos next year. I don't mind the chase, but card companies are getting out of control with the parallels... I'm looking at you Panini Prizm and Topps Chrome, which includes the new Ben Baller Chrome set.

I believe this is the first 2020 Archives Vogelbach card I have shown on the blog, so let me take a second to address the reason why he is squinting in the photo. Obviously, he is checking to see if can still see the ball he jettisoned into the stratosphere just minutes earlier while taking batting practice. For the record, this is the only viable argument I will accept.

Bordering the green foil board card, seen above, was a rookie card of Justin Dunn. I jumped off the Mariners' bandwagon when Vogelbach reached for his passport to Toronto, but I know enough about Dunn to realize he has the potential to be a serviceable middle of the rotation type. It'll go into my trade box for the time being. 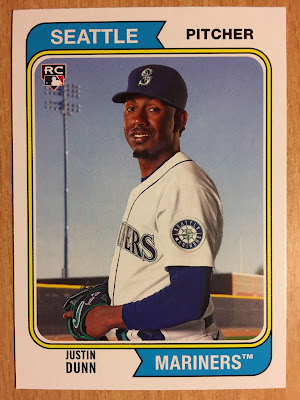 There was another card.

Actually, I needed it for a player collection.

More importantly, I needed it for my VOGELMONSTER collection! 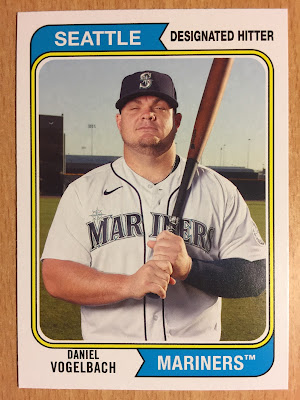 Do you how glorious a free base card can be? Oh, so glorious!

I love when sellers throw in freebies to "protect" the other cards. I was watching a Phil's Pulls video on YouTube the other day and he says he saves packs of regular Bowman from retail Mega Boxes to use as protection in card shipments. Must be nice!

2020 Stadium Club Auto Update: Oh. My. Goodness. A package from Julie arrived today. I didn't open it. I'm going to save it for an evening after a particularly rough day at work. I'm a teacher... during a pandemic... working at a school which is offering both in-person and remote options to students... which I try to execute during the same scheduled class period. My head spins like an owl's on a regular basis. What I'm getting at is I'll surely crack into Julie's package within the next couple of days. I know, I know. I'm such a tease.

Have a great evening!

I've got time for a quick post tonight. The contents of today's PWE come from Beau. You may know Beau as the fella who is trying to amass one million Cubs baseball cards. That's quite an undertaking, but he's making some serious headway and is closing in on 500,000. 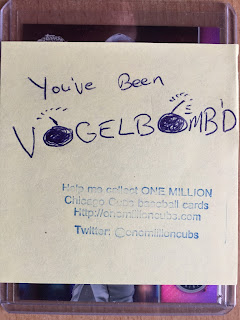 That's a bombing I'll happily accept any day of the week! 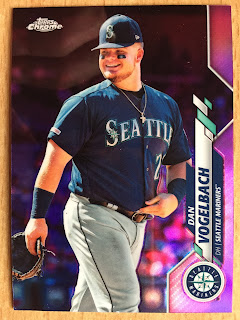 I love me some chromey goodness in a plain white envelope. Thanks for thinking of me, Beau!
Vogelbach Update: The Vogelmonster and his 0.375 batting average (NL only) will square off against The Professor and the Cubs tonight. I'm all pins and needles!
Posted by P-town Tom at 9/12/2020 05:22:00 PM 6 comments:

I Fell into Ebay's Trap 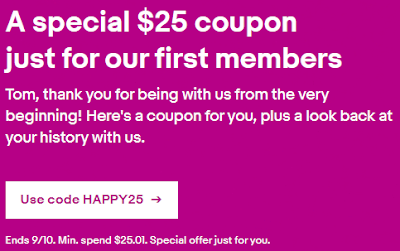 I use my watchlist to store all the Vogelbach cards I need for my player collection. I could have picked up a handful of Chrome parallels, but I decided to take down a 1/1 from my wantlist instead.
It arrived just the other day. 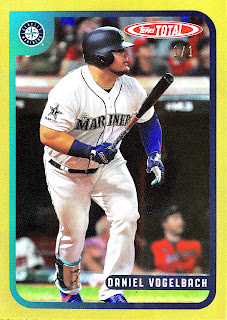 This is the gold parallel from this year's online exclusive of Topps Total. I would never spend the $30 asking price for any Vogelbach card, but I could spend five dollars after applying the coupon.
I already had the base card from Topps Total, but I didn't have the other two parallels, which also happened to be listed on the website.
So, I fell into Ebay's trap and purchased a couple of more cards, which I wouldn't have done unless I had the 1/1. Someone in their business department is smiling at their cleverness. I'm sure of it. 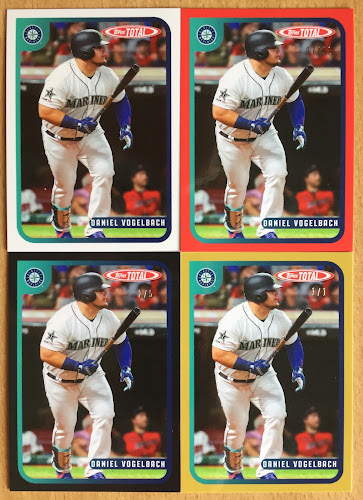 The red parallel is numbered to 10 and the black is numbered to 5. Low numbered parallels are tough to come by and I feel pretty fortunate all of these were available on Ebay at the same time.
So, there we go. The 2020 Topps Total complete rainbow. It's only four colors, but that's all the parallels. Woo-Hoo!
If you haven't tried already you should give the coupon code a try. I know it hasn't worked for everyone, but you might get lucky!
Thanks for stopping by!
Posted by P-town Tom at 9/06/2020 07:33:00 PM 8 comments: