Panini Chronicles looks like a really wild box rip. The set is comprised of many notable sets from Panini's past, such as Absolute, Spectra and Gold Standard. You can purchase a box for around $80, which includes four autographed cards and some lower numbered parallels. 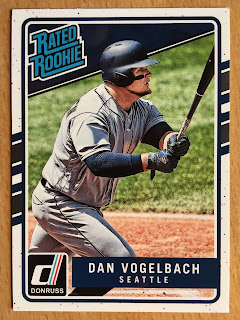 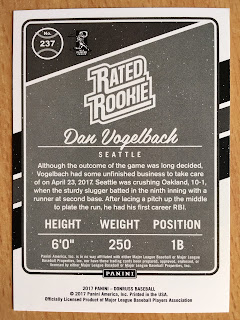 During my first trip through the hobby I always favored the "Rated Rookie" cards. So naturally I was pretty stoked about adding a Vogelbach in this format to my collection. I guess I've always been a bit of a prospector at heart. 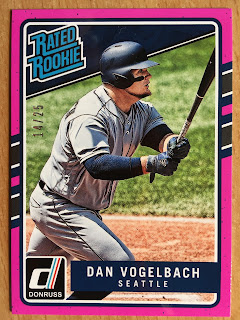 I purchased a three case break of Chronicles on Ebay and my gamble was rewarded with the pink parallel, numbered to 25, shown above.

I think Panini did am admirable job selecting a photo where the absence of logos isn't immediately noticed. The helmet is at an angle where the logo wouldn't be entirely visible and Vogelbach's right arm is blocking a sizable portion of where "Mariners" would be found on the chest. 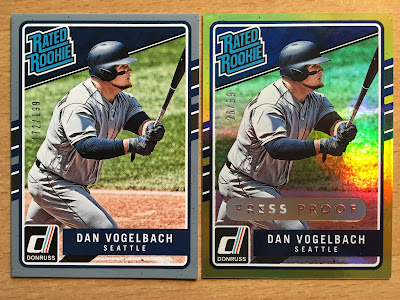 I've been able to secure the gray bordered card and the much more aesthetically pleasing gold press proof. Very nice.

Chronicles is one of the few sets where I still feel I have some work to do. I'm working hard on tracking down the Aqueous Test Proof and I'll snag it eventually, but the rest are very low numbered and many never see my collection. Only time will tell.