Laura and I left for Denver on a direct flight out of Peoria Thursday morning, picked up a rental car (we will not be buying a Chevy Traverse anytime soon) and stopped by Emily and Steve's house in Golden.  What a cute little bungalow with oodles of character.

We made it to the YMCA of the Rockies at Snow Mountain Ranch, just south of Granby, Colorado, by 2 o'clock and the wedding festivities could not wait.  We had a bachelorette party to put on!  After decorating and tracking down food & beverage for the girls I joined a group of 15 other guys. We visited all the bars in Granby (both of them) and then headed up the mountain to a campfire site for some serious celebration.  Stories were told and beverages were consumed.  Good times. 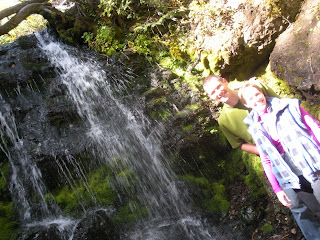 Friday, a group of us went for a 3 mile round trip hike to see a waterfall. It was nothing in comparison to what we saw in Hawaii earlier in the summer, but beautiful nonetheless.  I played nine holes of frisbee golf at possibly the worst frolf course I've ever experienced.  After a nice nap, we went to the zip line!  I backed out.  I had signed up originally, because I'm a chicken I backed out.  The bride, groom, Laura, and Jed all went. It was fun watching, but I value my life and I wasn't climbing that pole!  Next was the rehearsal dinner which featured BBQ ribs.  Over a hundred people attended the wedding weekend from numerous different states and our lodge was soon filled with laughter and appetites. 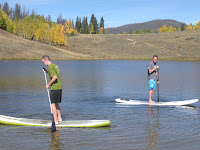 Saturday morning I went for a run and realized my lungs aren't ready to compete at 8,800 feet up.  Later, Laura, cousin John, and our new friend Marta went paddle-boarding at the lake on the ranch.  I had lost some of my confidence while trying to SUP in Illinois, but I regained it all and more in Colorado.  Thanks, John! . . .   Before long, it was wedding time!


The wedding was really beautiful.  It was western themed and the setting was amazing.  Short, sweet, and heartfelt... my favorite type of wedding.  John and I were in charge of the "photo booth" at the reception.  We had to dress everyone up, and take color pictures that would be printed out from a polaroid type camera.  The pictures would then be affixes to a colorful index card with wishes and congratulatory remarks.  It was fun, and I was glad that I could contribute something to the wedding day.


Sunday morning featured a wonderful brunch hosted by Sarah and Jed.  We said our goodbyes and headed back to Denver, through the Rocky Mountain National Park to look for moose.  Well, Laura and Marta just wanted to see colorful aspen and beautiful sights.  I wanted moose!  Pictures were taken, trails hiked, and rocks were climbed... but alas, no moose.  We did find a near-frightening photo opportunity of Marta though!

Laura and I had a great time.  We didn't get back until late Sunday night, but we met some really nice people, took part in a beautiful wedding, and saw many the Rockies.  Well worth the trip!

We survived!  Jane, Laura, Jeremy, Mikelle, Sandra, Vince, and myself all traveled to Rockford Friday evening and spent the night at Jeff and Nichole's.  We departed about 6:40 a.m. and arrived at Twin Lakes, Wisconsin, about 7:50.  We checked in, laced up shoes with timing chips, applied face paint, and pump ourselves up.  Somewhere in the mix Jeff's cheeks made an appearance.

We snuck into the 9:00 heat and attacked what is described as "3.08 hellish miles".  The course included 12 obstacles (walls, mud pits, fire, & etcetera).  We deftly navigated the course and we all finished without major injury.  Afterwards, like true warriors, we dined on turkey legs and drank beer!


Challenging course, good food, and lots of laughs with great friends.  It was a fun morning!  Did I mention we received t-shirts, plush viking helmets, and a medal for finishing!  Enjoy the pics! 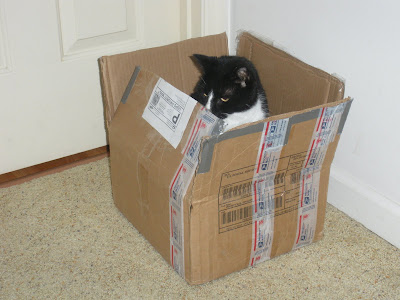