My wife and I traveled to Madison, Wisconsin, to spend the Labor Day weekend with her newly married cousin. They had recently just moved to a new neighborhood and it was the weekend of their annual block party. People from Wisconsin known how to party!

They blocked off the street, brought games like ladder golf, bags, and table tennis. Everyone set up their own card table in the middle of the street to make one loooong dinner table for the pot luck. There was a movie playing once the sun set. After the kids went to bed the adults stayed out, cranked up the music, and turned the street into a dance party. The music was actually pretty good... lots of tunes from the last 25 years and a nice mix of genres.  We went to bed "early" and I got up around 2am to go to the bathroom. That's when I looked out the window to see about six people cleaning up. 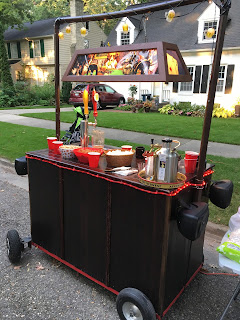 The finally turned down the music and wheeled the mobile bar back into a driveway. Pretty impressive for being homemade if you ask me. There was a mini frig accessible from the back, and yes, there were two kegs underneath connected to those tappers.  Marvelous!

Before we ventured out to the block party I snuck away to a local card shop attached to the Westgate Mall, known as the Baseball Card Shoppe. I was the only patron in the shop and I talked with a relative of the owner a bit. He was a nice guy and he gave me a quick tour of the place. There was plenty to look at, but what I was impressed with the most was all of the unopened boxes of wax within the store. Many were discounted and some of them dated back to the early 1980s. None were discounted enough for me to pull the trigger, but they were very competitive to Ebay listings, as I checked the app on my phone as I browsed the inventory.

I did make a few purchases, which I thought I would show off. 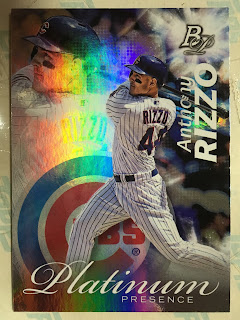 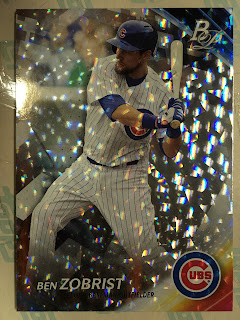 Bowman Platinum is probably my favorite release of 2017, but I haven't been able to track down any packs at retail outlets, nor is The Vogelmonster included within its checklist. Bummer. Still, I'm a sucker for shiny AND sparkly!

On to the good stuff! 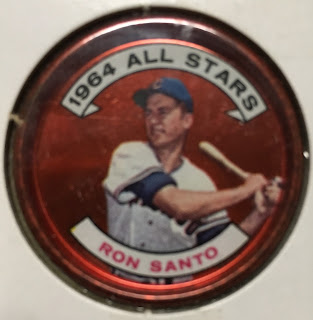 I couldn't pass up this coin! The price was better than what I could find on Ebay and I'm struggling to find vintage Ron Santo cards I don't already own. This purchase was a no-brainer. 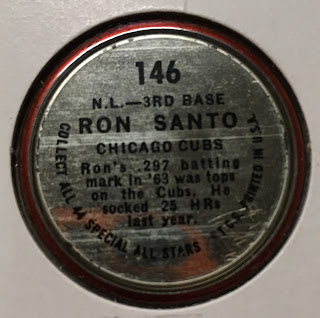 I paid about half the price of a blaster for the next item, and I'm kicking myself for not buying the other Cubs the shop had.

It's a 1936 Diamond Matchbook of Cubs' HOF catcher Gabby Hartnett. This could very well be the most unique item in my collection, and it certainly is one of the top five oldest.  I'm really happy to add this to my collection, but I'm struggling to find a place to store the five inch tall item.

A PWE from up North

Nick, from Dime Penny Boxes, sent a beautiful PWE my way last week, but it's stayed sealed up until now. I promised myself I wouldn't open any baseball cards, wax or PWEs until I was able to shake this poison ivy thing. So glad that's over and done with! Nick and I have one of those unspoken deals where neither of us keep score, but just send some cardboard we think the other will appreciate.

I love Nick's PWEs because I can always count on that extra level of personalization.

Somehow I missed out on the baseball player forever stamps.  When did that happen?  Any Stargell/Bucco fans want a used, but not metered, stamp?

How's this for starting a PWE? 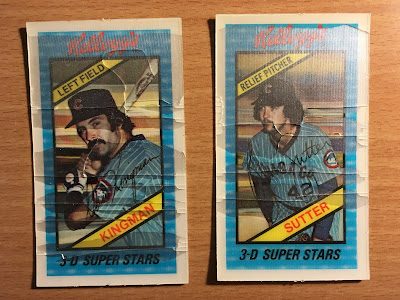 I just got done telling my wife that if Kellogg's put baseball cards in their cereal again, I would stop buying my generic brand and eat nothing but Kellogg's for breakfast until I finished the set.  She didn't even blink an eye. I guess after 13 years of marriage she knows what she's gotten herself into. 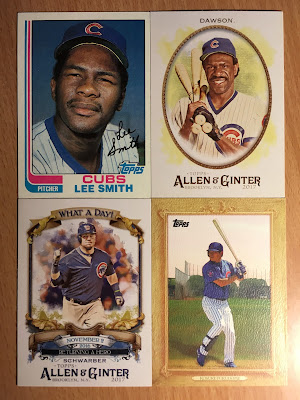 Cards for the player collections!  The Schwarber is my favorite. I don't have many Cubs cards from 2017, but I had one of these A&G Schwarbers in my World Series binder. Now, I have one for the player binder!  Woot! 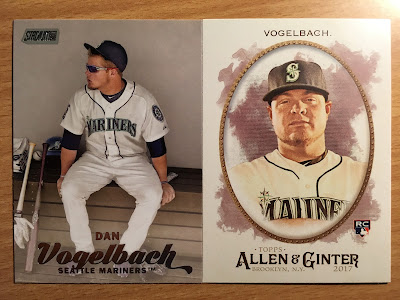 Ahhhhh... THE VOGELMONSTER!  Dupes, but I'll take them all! 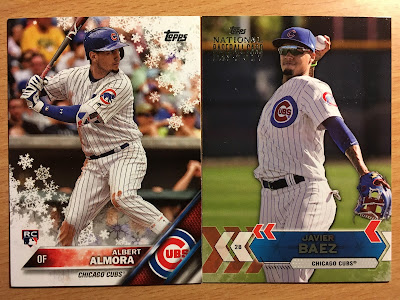 I didn't buy any of the 2016 holiday boxes and I missed National Baseball Card Day this year. Both are awesome cards!  I don't know about you, but I really like the NBCD design. 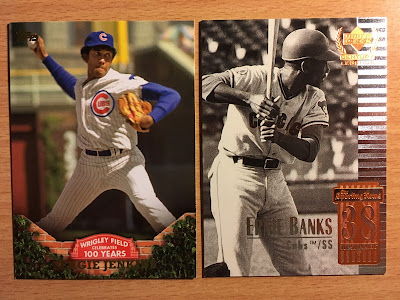 I finished the Wrigley Field Celebrates 100 Years set, so this Fergie goes in the binder. Additionally, I have the entire Upper Deck Sporting News Top 100 set in a binder, and it's wonderful. So thankful for another copy for my Ernie collection! 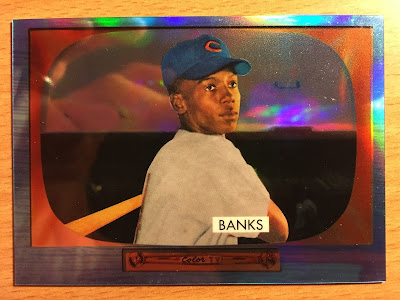 1955 Bowman Ernie Banks... I'll never own the real thing, but shiny and blue is a nice consolation prize! 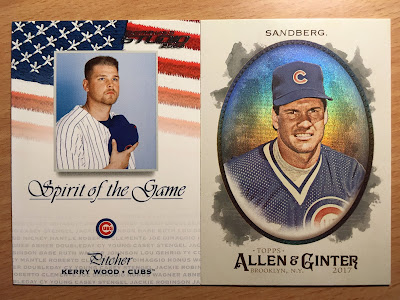 My Kerry Wood and Ryne Sandberg collections have been ignored this year. Next year... next year...  there I go waiting 'til next year again! 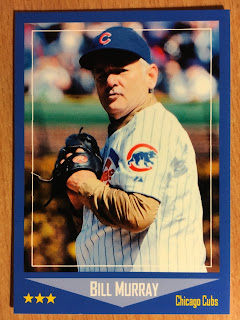 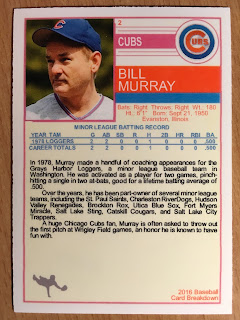 One of Gavin's finest via Nick?  Yes, please!  Not sure which binder this one will go in, but it has certainly found a home here in P-town! 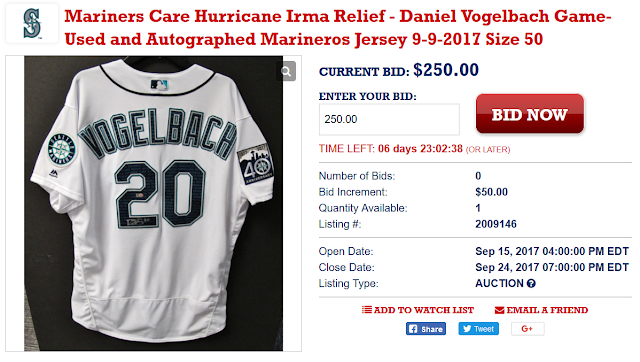 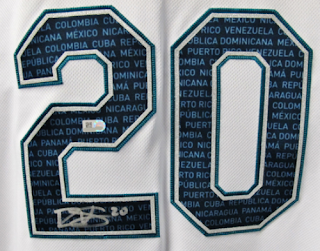 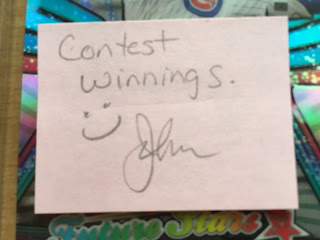 It's been a busy start to the school year, but I've got a few pictures to show off. These should give you a quick summary as to what I've been up to, since I haven't had much time for cardboard as of late.

My junior high softball coaching duties ended yesterday and maybe now I can play a little more attention to the blog with the extra time. 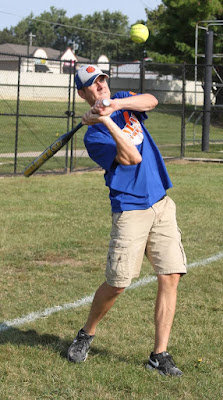 Above is a picture of me hitting fly balls to my sixth grade team during pregame warm-ups. I take pride in being able to hit a softball into the glove of a less than confident twelve year old. Not easy to do at one hundred and twenty feet away from me!

My wife, father-in-law and I planted a new tree in the front yard. 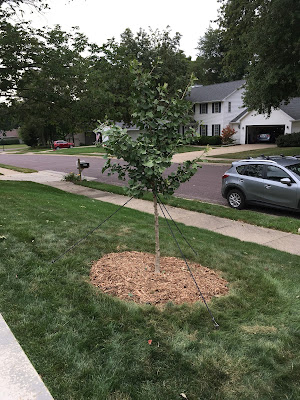 We lost our ash tree last fall to the notorious emerald ash borer.  Gingkos are slow growing, but they are supposedly very hearty. Hopefully this little guy does well!

Our school district had a "school improvement day" recently and I learned how to graph within an on-line graphing calculator. 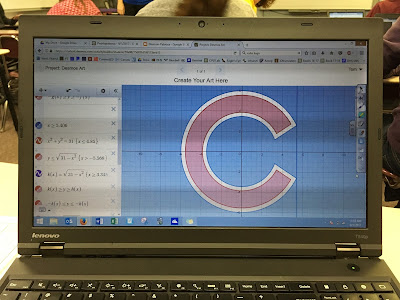 It took some work, but I finished a Cubs logo!  The shading of the red and blue was the most challenging. Hat-tip to my co-worker Mike for troubleshooting for me!

I was able to get a little paddle boarding in a couple of weekends ago. 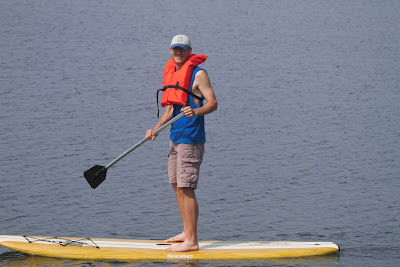 Laura and I, feeling a little brave, traveled across the lake at Snakeden Hollow on the same board. She sat on the back and I did the paddling. I tried to make it across standing up, but I quickly found I had to kneel. Either that, or wind up wet! 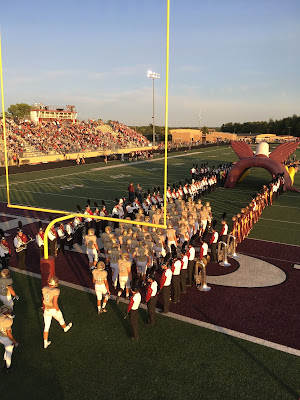 Last week, I was in a scissor lift about twenty feet in the air at the back of the north end zone. Yikes! Their end zone camera is currently broken, so they have four sophomores running the camera from atop the press box, which is my normal post.  I'm not a big fan of heights and I'm hoping they get the camera fixed soon.

Lastly, the Mariners called up Dan Vogelbach yesterday. I should be pumped about this, but he'll be lucky to accumulate ten at-bats the rest of the way. The Mariners seem committed to Danny Valencia and Yonder Alonso at first base with Nelson Cruz being used as the DH. I guess that leaves me waiting 'til next year. Go figure.
Posted by P-town Tom at 9/07/2017 07:03:00 PM 8 comments: