So, WEEK (NBC-25) lost Eric Shangraw last week to the Peoria Disposal Company.  My favorite news clips from Eric weren't necessarily news, but restaurant reviews from his "You Gotta Eat" segments.  They were never chain restaurants and featured restaurants from Canton to Bloomington.  In fact, that's how Laura and I found Cracklin' Jake's in Banner, IL.  We watched the video clip, it looked good, and off we went!

I think my Grandpa and I should apply to be the new "You Gotta Eat" guys!

I met Grandpa for lunch today at Billy's Phillys on Farmington Road in Peoria.  Apparently this quaint little restaurant has been open for nearly 21 months and somehow it managed to elude my radar until today.  We were greeted by the owner, who took our order, cooked, and served us.  Turns out he is a former carpenter from Philadelphia, which appealed to Grandpa, and he helped build the Phillies' Citizen Bank Ballpark, which kept my interest!  He couldn't find work in Peoria, so he turned to his love of food.

The food was awesome and I thought it was a pretty good value: two cheese steak sandwiches, two drinks, one order of fries, and some TastyKakes for dessert. Total price: just under $20.  The sandwiches were nicely done, I had onions, green peppers, and cheese wiz on mine... mmmm...   The rolls are shipped in daily from a place in Philadelphia and bring good flavor to the sandwich without drowning out the taste the cheese steak, which almost melts in your mouth.

I've always considered myself a pizza and burger man, but if all cheese steaks were like Billy's, then I might have another "go to" menu item!

Oh, and don't forget the TastyKakes!  Billy's Phillys are the only place locally that you can pick up TastyKakes.  Oddly enough, peanut butter was the variety today, which I couldn't have been happier about.  After tasting one all I can say is, "Happy, Thank You, More Please."  (Which is also the title of the last movie Laura and I watched.  Check it out if you like romantic comedies.)
Posted by P-town Tom at 6/29/2011 01:46:00 PM 2 comments:

Email ThisBlogThis!Share to TwitterShare to FacebookShare to Pinterest
Labels: food 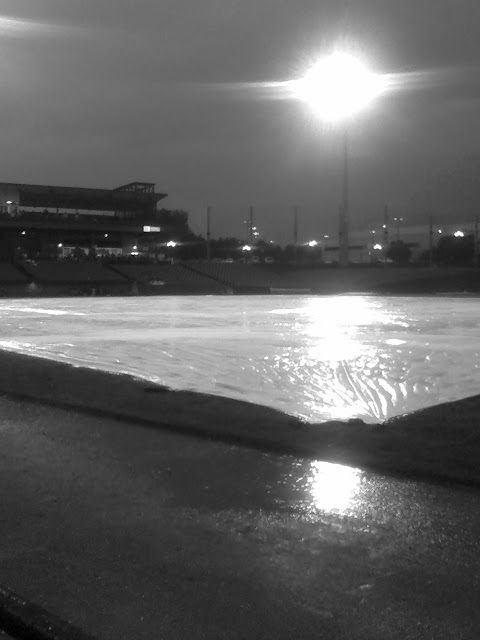 Let's Review, Shall We?

Change #2 to read, "Blood and stories referring to it.  (NOT okay with my own.)"

Laura and I thought we would burn some calories today by splitting and stacking wood at Mom & Dad's place today.  We're a little more than an hour in and before we knew it we were on our way to the emergency room.

Since this intended to be a PG-13 blog we won't show any "real" pictures of the event, although Nurse Laura has one on her smartphone that I'm sure she'll share if asked.  Here's a little math equation instead:

So, yeah. Um, I'm not Dr. Evil, but his left pinky does look much better than mine. I'm not real big on details (see #2 above), but I guess my pinky has a "minor open fracture" and a decent sized laceration that required 9 stitches to close.

In all honesty, I was due.  Actually, way overdue to do something stupid beyond all doubt.

Many thanks to the ER nurses for not letting me pass out, to Ben for stitching me up, and for Laura being a rock during the whole series of events. 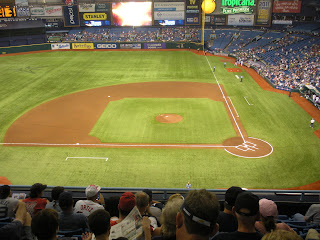 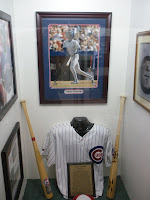 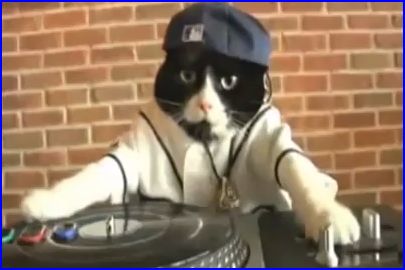 Overall, it was a great experience, and if I was forced to retire in Florida, it would definitely be in the Tampa/St.Petersburg area!
Posted by P-town Tom at 6/16/2011 05:39:00 PM No comments:

Marlins: if MLB were to contract a team...

It's summer, so that means baseball trips!

Jeff and I flew down to Florida and took in the Marlins/Dbacks game Monday.  What a sad state of affairs the Florida Marlins franchise is. They've won two more World Series in the last 15 years than the Cubs have in the last 100, but that doesn't speak to their ballpark, which is a converted football stadium, or their glaring attendance issues.

It was hot & muggy, and we saw some horrid pitching as the teams gave up 30 combined hits and 21 runs.  I'm a pitching guy, that simply will not do!  So I focused on what was going on around me... a bunch of football accomplishments and banners, Billy the Marlin, scantily clad cheerleaders, and more bad baseball.

Jeff and I sat comfortably, spread out, amongst the other 5,000 or so other fans (perhaps an overestimate). Luckily for the Marlins they will be moving into a brand new ballpark in 2012, and the novelty of a new park will bring more fans, but they will only keep attending if the product on the field is worth watching.

The food wasn't bad, but everything else was bottom of the barrel quality in my eyes.  I had to resort to eating a cordon bleu crepe, because many of the concessions stands were closed!

I don't blame South Florida for staying away. 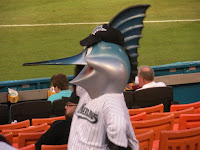 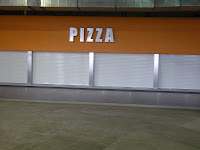 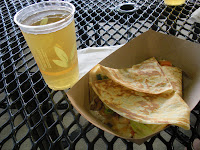 Running the Chicago 13.1 half-marathon this past weekend did nothing but reaffirm my distaste for the heat.  I trained pretty extensively: 200+ miles over the three previous months.  But my problem was that those miles were logged in fairly cool temperatures.  Saturday was anything but cool.  I had a personal goal of finishing in under 2 hours, but I gave that up at mile 8 when my pace wasn't cutting it any longer and my tank was was empty.  I ended up walking quite a bit the last 5 miles, something I never did in my training, and I settled for a time around 2:14.  For my efforts I may have ended up with a mild case of heat exhaustion; well, that's at least what my intestines and stomach were trying to relay to me.

No worries.  I'm good now.  I'm still not too pleased with my time.  I'm not used to falling short of my physical/athletic goals that I set for myself.  I'll rebound, and may even try another half marathon.  But, Mother Nature is a bearcat, and I'm in no hurry to get back out there.

Just for those that are curious... The start time temperature of the race was 78.  When I finished it was in the middle to upper 80's.  They administrators "black flagged" the race when I made it to the 11 mile mark, which meant they would no longer keep time and we were supposed to slow down or walk.  Ten ended up going to the hospital and there was one unfortunate casualty.  Pretty miserable running conditions on the whole.