So, yesterday I bragged about completing the base set of Topps Fire. I busted one hobby box, three blasters, and couple of hanger packs and I never pulled a Vogelbach.  Go figure. The rest of the set, including the base Vogelbach I traded for through the generosity of my blogging buddies!

As result you're looking at a bunch of Ebay purchases.  And actually, I'm still chasing one card, but more on that in a bit. 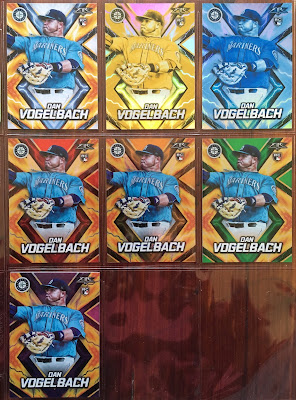 There are three main base designs and my favorite of the three is the one on Vogelbach's card. The parallel colors really pop on this design, and I think it's pretty cool how the Vogelmonster is standing in the middle of the card's lightning display. I wish the framing job of the picture didn't cut off his right arm, but overall, I'm pretty happy with this card.

Once again, I picked up the blank back card from the Topps Vault. I didn't bother to take a pictue though... sorry about that!  If you've seen one blank back, then you've seen them all. No kidding... they're all the same. 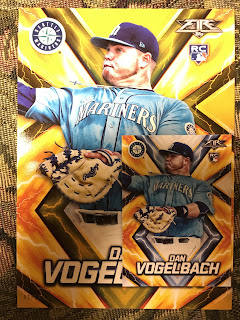 I also picked up one of those 5" by 7" cards. I may be missing another 5" by 7", but I haven't seen a different variation show itself on Ebay as of yet. 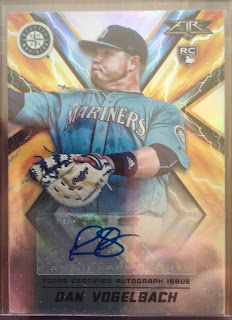 I believe all the autos in this set are stickers. The base auto, above, is numbered to 486. 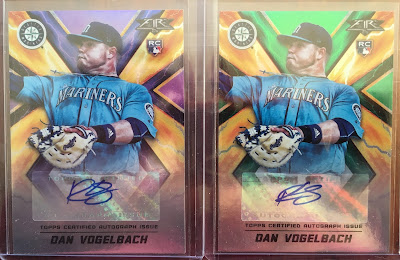 How often does a set feature purple and magenta parallels? The purple, in my opinion, is a little on the muted side. Also, no red, blue, or orange autograph parallels. Instead we get magenta. It's a little odd, but I think the magenta, below, works tremendously well. 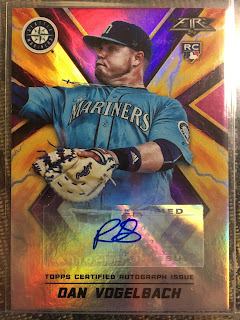 Topps fire was a fun set to build, but waiting on a retail only product to hit Ebay really tries one's patience when trying to supercollect a player. Most of the big breakers on Ebay don't get their hands on this kind of product, so I was left relying on the little guy to post their auctions.

The only card I'm really missing out there is the magenta base card parallel. Not one appeared on Ebay in October or November, but the first one did show up just a few days ago. Like I said, this set has tested my patience, but I'm winning!. I'm going to vulture that card at the last second and then I'll feel pretty good about Topps Fire overall... a complete set and all the non-1/1 Vogelbach cards!  Woo-Hoo!