Today marked the opening day of the 2012 Major League Baseball season.  Ichiro had 4 hits in his homecoming and helped the Mariners down the Athletics, in Tokyo, by the score of 3 to 1 in eleven innings.   Last year at this time I was still contemplating the idea of creating a blog, thus the following are my first MLB season predictions.


NL West
1. San Francisco Giants - lots of pitching and full year of Buster Posey = Back on Top
2. Los Angeles Dodgers - too much talent on this club not to compete for a division title
3. Arizona D'Backs - in my eyes they overachieved last season; still better than a .500 team
4. Colorado Rockies - improving young staff and solid bats, but a couple years away
5. San Diego Padres - rebuilding mode

NL Central
1. Cincinnati Reds - if Dusty manages the pen correctly, they'll run away and hide
2. Milwaukee Brewers - still have the pitching, but losing Prince hurts
3. St. Louis Cardinals - too pesky and resourceful to fall too far
4. Pittsburgh Pirates - improving, but need to loosen the purse strings
5. Chicago Cubs - three 5th place finishes in a row?  Yikes!
6. Houston Astros - gosh, they're bad, with no signs of improving

AL West
1. Texas Rangers - may be the best team in baseball if they can stay healthy.
2. L.A. Angels of Anaheim - that Pujols contract will bite them in the butts, but not this year
3. Seattle Mariners - have some nice young arms; Ackley & Montero will help
4. Oakland Athletics - youngest starting rotation in the majors = not many wins

AL East
1.Tampa Bay - voting with my heart here, not my head
2. Boston Red Sox - good luck Mr. Francona; expectations are high
3. New York Yankees - Granderson comes back to earth and ARod plays in < 100 games
4. Toronto Blue Jays - will they ever compete in this division?
5. Baltimore Orioles - I like the O's, I really do, but they're in a very tough division


I'll check back in October/November to see how the season shook out.  Six months and 162 games is a long season, and all it takes is one rookie to come out of no where or one crippling injury to change the fortunes of a team.  It'll be fun to watch and you can bet I'll be doing more than my fair share!
Posted by P-town Tom at 3/28/2012 09:09:00 PM 2 comments:

Bobblehead #28
Name: Brian Downing
Position: OF
Team: California Angels
Description: 7.25 inches tall; standing; holding bat
Relevance: This bobblehead has grown to be a favorite of mine because of a math lesson I teach each year.  For some reason, algebra students like comparing themselves to bobbleheads.
How Acquired: Brian Downing is probably one of my 5 oldest bobbleheads.  He was given away at an Angels’ game in August of 2002, but I’ve never been to an Angels’ game.  Bottom line: I have no idea how Mr. Downing came to be part of my collection.
Other Notes: This is the one bobblehead that I own that doesn’t have a permanent spot reserved on the shelves in my man room.  Why?  I use Brian for a lesson covering proportions in my math classroom.  “If Downing is 7.25 inches tall, with a head that is 3 inches tall, and you are 6 feet tall, then how tall is your head if your body is similar to Downing’s?”      Answer:  nearly 30 inches! 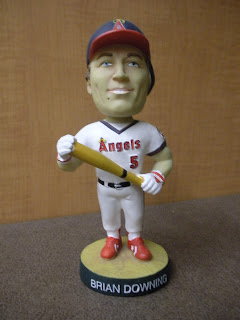 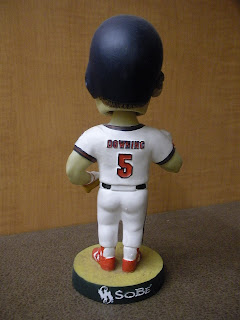 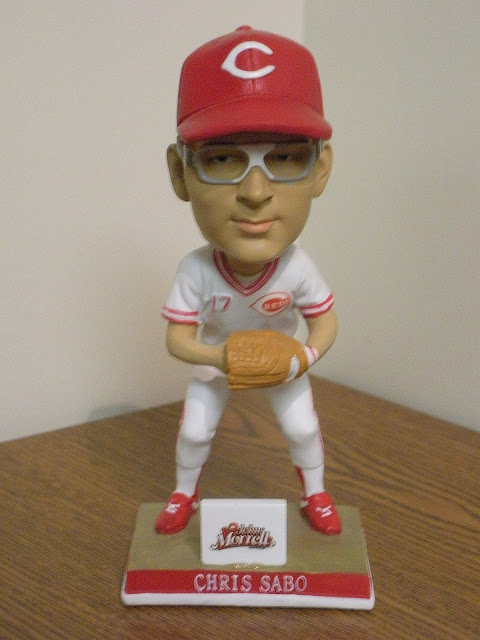 I'm not complaining, but what is going on with this weather?  I'm not sure how long it will last, so I tried to take advantage of Mother Nature's generosity.

Friday --  Taught Calculus outdoors!  It was a little warm in the sun, but it was a nice change of pace.  The exterior walls to the classrooms in my wing are molded concrete, painted, and the closest thing to a chalkboard one can find in the high school.  Well, that's not true, I believe there a few chalkboards still hanging in classrooms.  On the way home from work I spent $3.25 at Dollar Tree on supplies to ensure more outdoor lessons.

Friday evening -- Dinner on Grandview Drive with Laura: we packed some fruit, a couple of drinks, a sleeve of Thin Mints, and picked up a couple of subs from Jimmy John's.  Dining with the one you love and such a scenic view is a great way to begin the weekend. 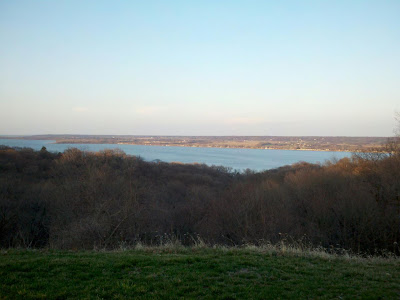 Saturday -- My dad has his own small engine repair shop behind the house and with the upswing in temperatures we're having the lawn mower repair business is also picking up.  Ed needed to be relocated to the pole barn behind the workshop so that the customer's riding lawn mowers could receive maintenance.  Guess who got to "drive" Ed down to the pole barn?  I floored the gas pedal the entire distance, yet Ed never went faster than Dad's riding mower.  Huh. 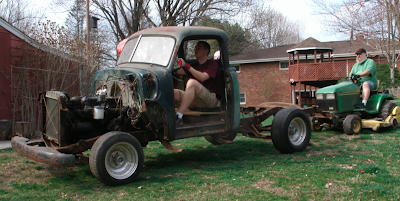 Sunday -- Laura and I spent the morning in the yard cleaning up after winter.  The patio furniture is out and it's officially grilling season!  Grilled chicken tonight, but I can see brats in the not-so-distant future. 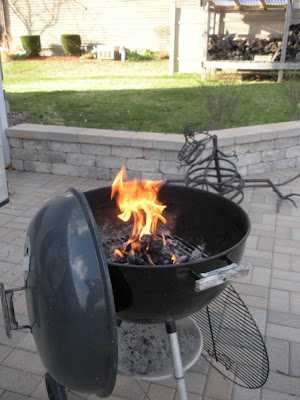 So I went to feed the worms our kitchen compost the other day. Gus loves to keep me company downstairs.  As soon as I open the door to basement he's downstairs pawing at the Man Room door.

"C'mon, Gus.  We have to feed the worms," I say while continuing down the hallway.

As soon as I open the next door he's in almost before I'm able to see what's next.  The red line in the picture below shows his eagerness to bound into the lawn refuse bag.  For the record, the bag is filled about a third of the way up with shredded newspaper to feed the worms. 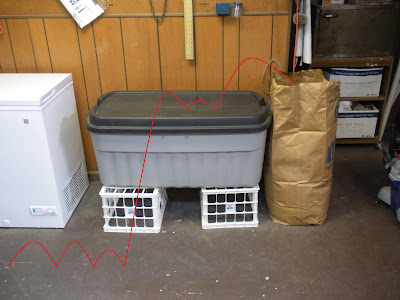 The trajectory coupled with his velocity resulted in the bag falling over and closing on itself.  Once up-righted, he seemed to really enjoy playing with the paper shreds in the bottom.  What's the attraction?  I don't know, but he's awfully cute. 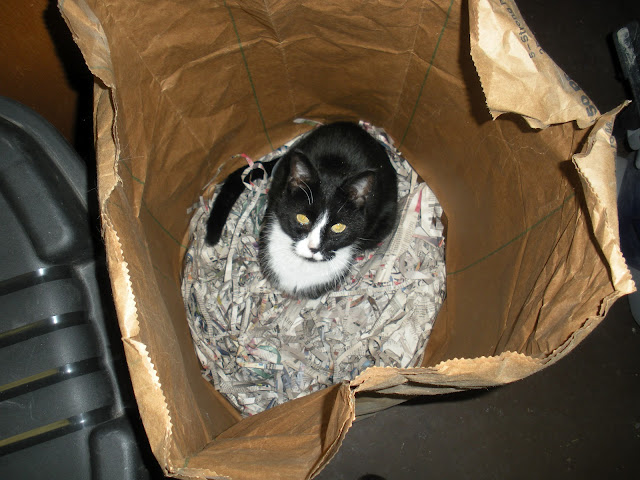 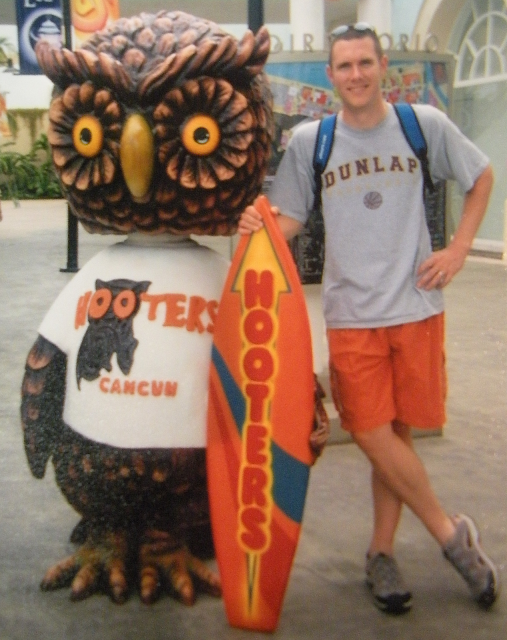 Bobblehead #30
Name: Hooters’ Owl
Position: Mascot
Team: Hooters
Description: 6+ foot tall
Relevance: Largest bobblehead I’ve ever seen.
How Acquired: I visited this bobblehead outside of a Hooters restaurant while in Cancun as a chaperone on a high school Spanish trip during the summer of 2007.  Yes, the head bobbles!
Other Notes: Only bobblehead in the Top 30 that I don’t own.  A traditional-sized bobblehead of the surfing owl is available (pictured below), but I won’t be adding it to my collection. 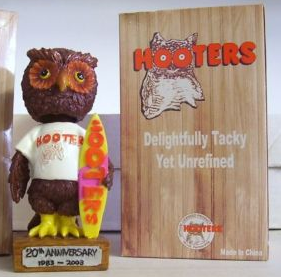 Each Monday morning I plan on posting a bobblehead from my collection.  The goal is to catalog my collection, which is something I've been meaning to do the past couple of years.  I'm approaching sixty bobble heads in my collection altogether, but I'm only going to feature the Top 30 and any that I may pick up along the way this summer.

This page will serve as a reference page for the Top 30 countdown and will have a link on the right side of the blog page for ease of access.


This past Wednesday I made the mistake of opening a pair of windows.  At the time, I couldn't find fault with my reasoning:
1. It was absolutely gorgeous outside.
2. A little fresh air in the house after winter is never a bad thing.
3. The cats love laying in the window sills and sunning themselves.
The outcome?  Gus has contracted one of the worst cases of cabin fever that I can remember.  One of the symptoms he is exhibiting is howling.  He just sits by exterior doors and howls.  He walks by windows and howls.  He wants to go outside so badly.  Which leads me to the other common symptom of cabin fever: escape-itis. 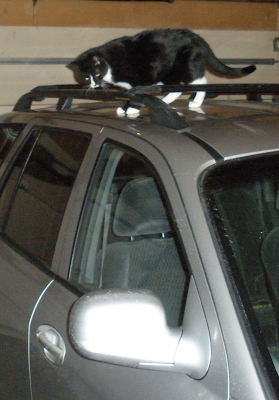 Exhibit A: This shot was taken yesterday.  I was simply trying to add something to the recycle bin, which is stored in the garage, and before I know it Gus is deftly winding his way around the door and through my legs and into what he perceives to be freedom.  Hah, foiled!  The garage door was closed!  That didn't stop him from playing King of the Mountain before I could convince to come back inside.

Exhibit B: I hear a cat meowing outside the office window last night about 9 o'clock as I sat at the computer.  Puzzled, I go to feed the cats their dinner and Gus is a no show.  Laura had spent the evening hosting a couple of friends to review the potential contestants for the upcoming Fug Madness brackets.  When they left he must have once again navigated, this time unnoticed, through a myriad of legs to his freedom. Luckily, he likes to brag about his successes and I heard him outside.

He knows he is not an outdoor cat.

Exhibit C: The below back lit picture from literally two minutes ago.  I only wish I could have captured the audio to go with it.
The funny thing is I know that Mooshie and Gus sleep most of the day away when Laura and I are at work, but he'll pace like a caged lion today while we're at home.  He knows that we're bound to open another door and he wants to be ready to pounce on any opportunity to escape.

I like to teach, I really do.  It's cool to see the light bulb flicker and then finally shine bright.  I enjoy the challenge of trying shape young minds on a regular basis with mathematics, while being able to occasionally throwing in a simple life lesson or a slice of advice when the opportunity presents itself.

Dare I say it?  Yes, I even feel as though I make a difference.

Today was one of those days where I come home and look at baseball related job postings on the internet.  This usually happens only 3-5 times a school year, but the more times this happens, over the length of my now twelve year career, the more I seriously consider the jump to another profession. 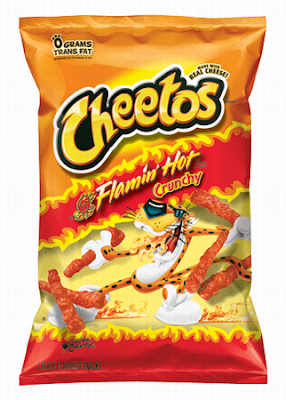 I have no numbers to back this up, although I'm sure they exist, but the number of fights at my high school seem to be going up each year.  I remember years where we only had  two fights, and I've already walked participants down to the office for two fights this year.

Today was something else.  Started over a bag of Flamin' Hot Cheetos.  Ended a couple minutes later after I was finally able to force some space between two "gentlemen."

I hate it when people compare the teaching profession to that of a glorified babysitter.  Today, I was that babysitter.

Here's the latest job in Major League Baseball that I have come across.  It's only an internship, but you have to get your foot in the door somehow, right? 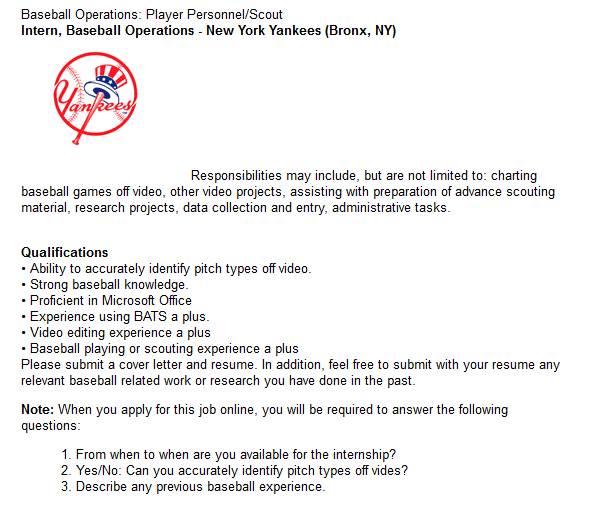 Oh, wait.  I forgot.  I'm really not keen on living in NYC and I really don't like the Yankees.