I have received a large number of plain white envelopes (PWEs) jammed with baseball cards through the mail. I've had one poor experience where some cards arrived mangled, but generally my history with the PWE, sending and receiving, is quite solid. Also, I have a good trading relationship with Nick, from Dime Boxes, and in no way do I want to suggest what follows is due to his negligence or him trying to pull one over on the USPS.

If anything, I think this was a case of a postal worker having an off day. At least, I hope that's all it is!

From time-to-time, in addition to my cards, I receive a little notice in my mailbox and an envelope requesting additional postage for the PWE or package. Usually it's for 21 cents, the price of an extra ounce for a letter, and I deposit the change in the mailbox the next day. No harm, no foul.

This time though... no cards. Just the notice that the "package" was short $2.51. Don't you hate it when the post office holds your cards hostage?  Argh.

The next day after work I made my way to the post office and stood in line for a while, it is the holiday mailing season after all. I don't know how much time passed, because I found a Chicago Cubs article to read. Thank goodness for smartphones!

Once I finally made my way to the front of the line I was able to hand off my postage due notice to a postal worker and they went to retrieve my item. She brought it up to the counter and had a conversation with another worker, who waived me up to her station. They both agreed someone miscalculated the postage due and all I owed was twenty-one cents. Huh. 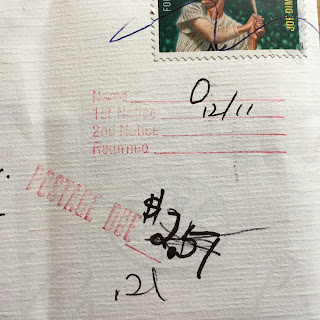 I paid, was given my item... a PWE... and walked out quite puzzled.

A 49 cent "forever stamp" was affixed to the PWE, but apparently the weight of cards was such that someone along the line thought the envelope merited an additional $2.51...  totally three dollars in postage.

For what it's worth, I was fine with paying the twenty-cents. What bothers me is I have received very similarly packaged cards from Nick without being asked to pay any extra shipping costs. In fact, I can't recall a time where Nick's "forever stamp" wasn't enough postage.

Honestly, I'm still a little dumbfounded. Three dollars for a PWE? Weird. I'm not sure what that post office employee was thinking.

Hey, let's take a look at the contents, shall we? 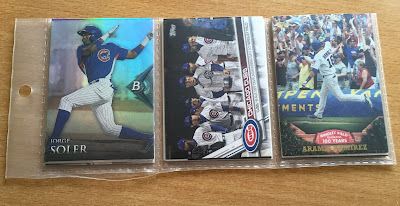 See? Nothing too suspicious going on here. Just your typical 9-pocket page, cut into a thirds, filled with cardboard, and then placed in a PWE.

Starting on the left, we have the Jorger Soler pocket. 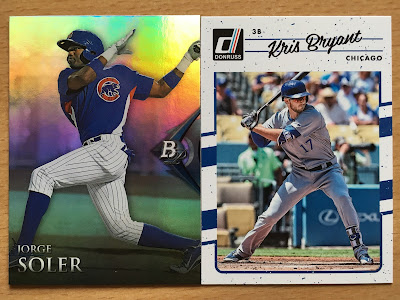 Jorge's first Bowman Platinum card is joined by an air-brushed Kris Bryant. I still think Soler has a chance to be something special. He outperformed Kris Bryant at a few stops during their minor league days, but he has to stay healthy! 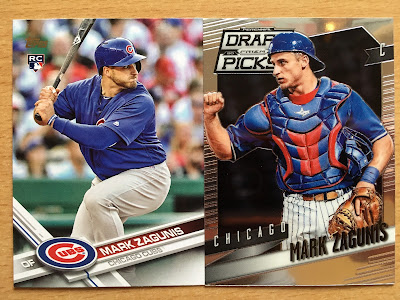 In the same pocket we have a pair Mark Zagunis cards and an Archives Javy Baez. That is one sharp looking Archives card! 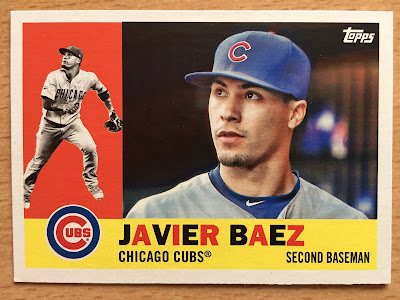 The middle pocket starts with the "Flag-Raising Day" card. I still need a couple more of these to fit into multiple binders. Heck, there are some cards where you just can't have enough duplicates. This is one of them for me! 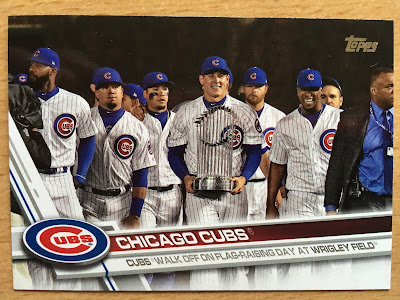 The other four cards feature two Hall of Famers, a guy who came up just short 500 career saves and an O-Pee-Chee card of Doug Dascenzo. 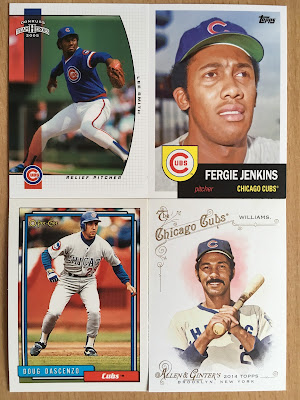 For the record, I have player collections of all four of the above gentlemen. Yes, even Doug Dascenzo.

The last pocket was like hitting the baseball card jackpot and I kind of felt like Aramis Ramirez undoubtedly does rounding the bases! 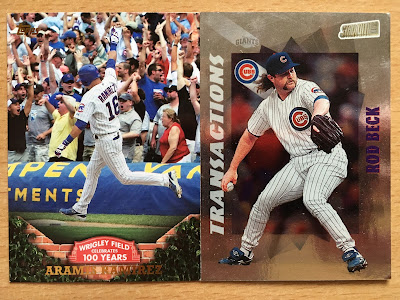 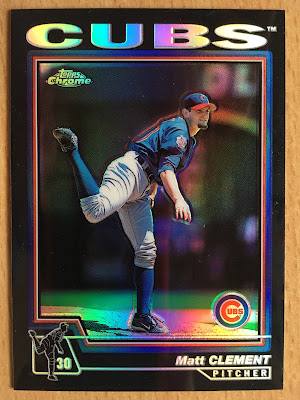 I know I've mentioned this before, but I was listening to the Cubs game on the radio, while driving to Chicago, when Matt Clement's pitching effort clinched a playoff birth in 2003. That same evening I proposed to my wife in downtown Chicago. That was a good day! I've been a fan of Matt Clement ever since. 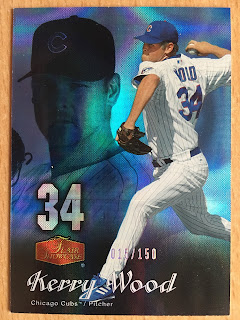 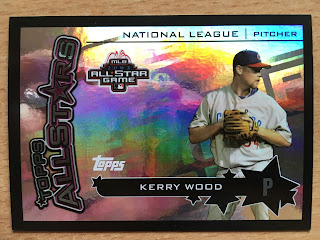 Both of these are new to my Kerry Wood player collection, which now stands strong at 518 unique cards. This card celebrates Kerry earning a nod to his first of two All-Star games. That year he led the league in K/9 and H/9 as a starting pitcher. Man, he was fun to watch pitch!

Nick, being the cool dude that he is, provided a nice little note in the PWE thanking me for a card and wishing me a great holiday. Love me some notes!