... the checklist I snagged from baseballcardpedia.com was missing a couple of cards from the '87 Topps set.

See what I mean?  Somewhere between Willie Wilson and Terry Francona should lie #784,  Cal Ripken.  You know the guy.  The man never missed a game in a 162 game season, yet somehow he's missing from this checklist.  Weird.  Just weird.  Fortunately, a local collector has already tracked down a copy of the Ripken for me.  How cool is that?  I haven't been able to swing a trade with a local collector in a little over two years.

Duff, from Bleedin' Brown and Gold, has #642 for me, which was also skipped over on the checklist.  I've never heard of Al Pulido before, so I will excuse the checklist makers for the error.

I was also missing #387, T.R. Bryden, from a trade package.  Again, a simply junk wax oversight from a fellow collector.  No biggie.  It just means I get to trade more!

So in summary, I thought the below trade package from AJ, The Lost Collector, was one of the last packages for my '87 Topps project.  Wrong. 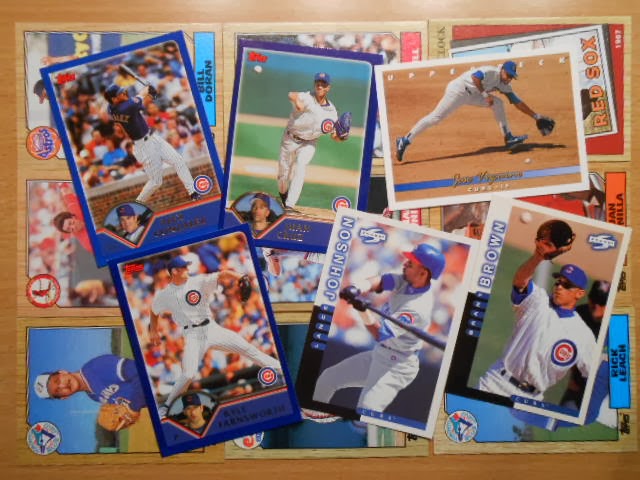 In other news...
We have a new blog which I plan to frequent everyday for a good long while. Matt, from Once a Cub, does a really nice job of breaking down the Chicago Cubs cards on his blog: finding the Getty image depicted on the card and then matching it up to the box score from that game.  Now he's decided to undertake the same process for every Topps base card from Series 1, Series, and Update.

I'm not going to buy any flagship this year, because I've decided to save my card collecting fund for a different set (TBD).  What's great about Matt's project is I still get to enjoy Topps' main product, at a very deep level, without blowing my card budget.  I can't wait!  Check out Matt's initial post at The 2014 Topps Blog.
Posted by P-town Tom at 1/27/2014 06:09:00 AM