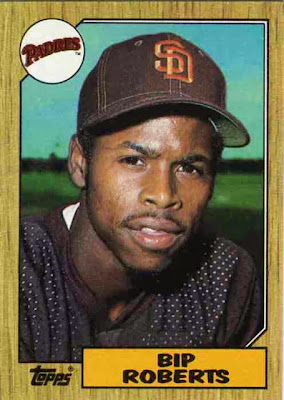 On January 3rd I threw down the collecting gauntlet to the blogosphere offering to randomize off a blaster to a contributor to my 1987 Topps Project, a challenge to complete the '87 set without purchasing any of the cards.

First of all, "the rest" was only about 30 cards, so don't be too embarrassed, Swing And a Pop-up.

Secondly, wow, did you guys step up!  I started out with 192 of the 792 cards, and within a week TWELVE different bloggers had committed to sending the other 600 cards through trades.  Simply ridiculous.

I'm still waiting on trades to come in, but the first few have already arrived. I sent a slew of trade packages out Thursday, and the last of the group will go out early this week. 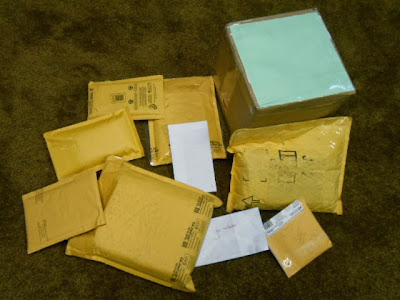 The above picture shows the mail I received in the span of one week.  I'm an infrequent-trader at best, but this project has certainly started the year off with a bang.  Oddly enough, only two of the above packages actually had 1987 Topps in them.  A couple have boxes for a group break I hope to do, one PWE contains prize winnings from a contest, the other PWE is pure generosity, there's a couple of eBay wins, and a sportlots.com purchase in there as well.  I spent most of the afternoon sifting through the cards and watching football. Fun times.

I'm not quite ready to randomize off the blaster.  I'm going to wait until next weekend, a three day weekend, to do so.  Just never enough hours in the day to get everything done, but the extra twenty-four next weekend should help.

Overall, 66 entries have been awarded for the blaster and they'll be placed into random.org probably on Saturday.   I did award a few entries to individuals who just sent cards willy-nilly and didn't give me a chance to keep my google docs list up-to-date.  Yeah, they'll all wind up being duplicates, but they're still getting an entry because I'm a generous fellow.

Last time I was perused the aisle I found an entire section of older blasters.  I guess they must have sold?  So, keep in mind that the stock may be different next week.  Remember, if you're willing to wait, another option would be 2014 Topps Series 1.

Thanks to everyone who has set up a trade to help me complete my 1987 Topps project without actually purchasing any cards.  Well, let's not count the coin I spent on shipping out trade packages or the Andrew Jackson I'll drop on the blaster.  Those are just details.  When it comes to set building I'm more of a big picture kind of guy.  Besides, trading and awarding a prize is fun!