Nick, from Dime Boxes, and I hammered out a quick trade involving a modest-size stack of 1975 SSPC cards.  Basically, I gave Nick the freedom to send back whatever he thought was fair.  These are my favorite kind of trades, because I really never know what to ask for in return OR what my trading partner has in their collection.

Nick?  Well, he has a little bit of everything in his collection.  For instance, a 50-cent 1975 George Brett rookie card.  Granted, it's been through a washing machine and it cost five dimes (instead of the normal 1 dime), but that's one sweet looking card!

How about some cards that didn't go through the washing machine?  Sure!  Let's dive in! 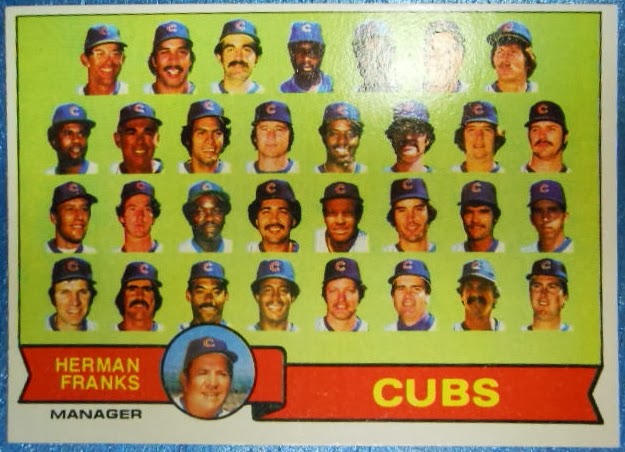 Here's a couple of Hall-of-Famers who share a retired number. 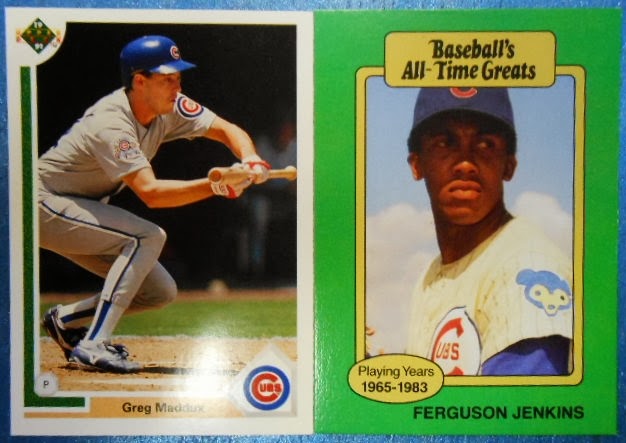 Nick seems to have a knack for picking up cards that feature shots that you don't see all the time.  For example, it's not often you'll find a card of a pitcher bunting.  But, take a look at the back of the Maddux card! 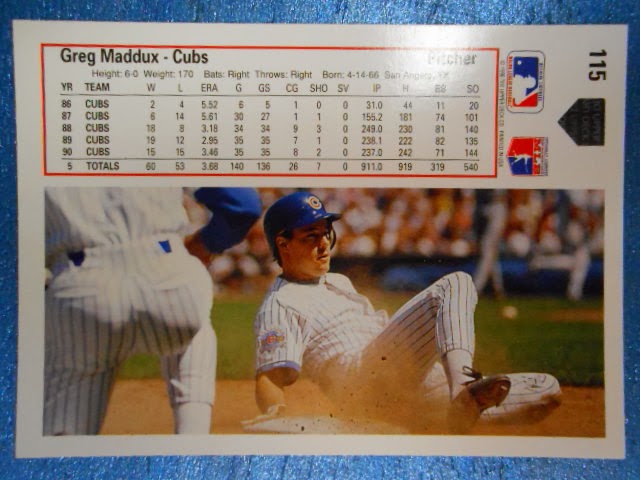 A pitcher sliding into third base? I bet this was the only card manufactured in 1991 that boasts such a shot!

Here's a couple more Hall-of-Famers.  This is the 695th unique Sandberg in my collection.  Coincidentally, Nick also sent me the State parallel late in 2013. 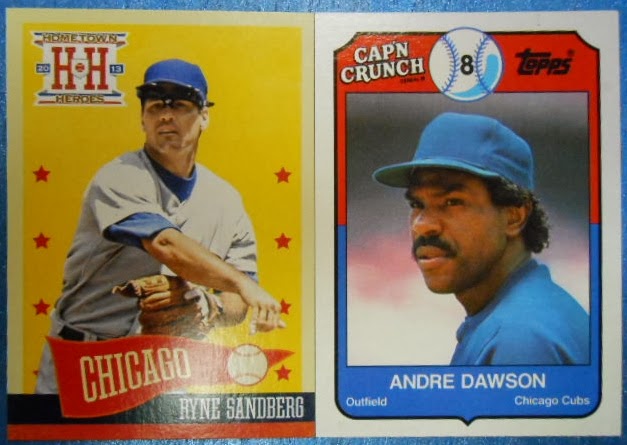 I don't have an official collection of The Hawk, and I'll never approach the levels of my sister's Andre Dawson collection, but this oddball is a welcome addition to my binders.

Here's one of the state parallels from the Hometown Heroes set that I mentioned a second ago. 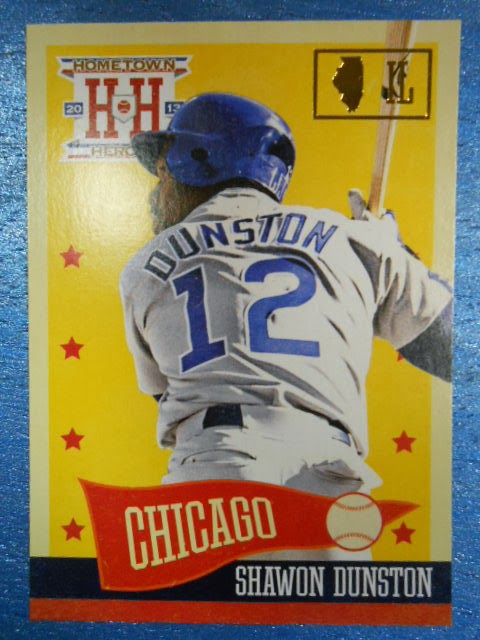 Shawon Dunston, Sr.  Yep, I need to differentiate because his son is playing in the Cubs' farm system. 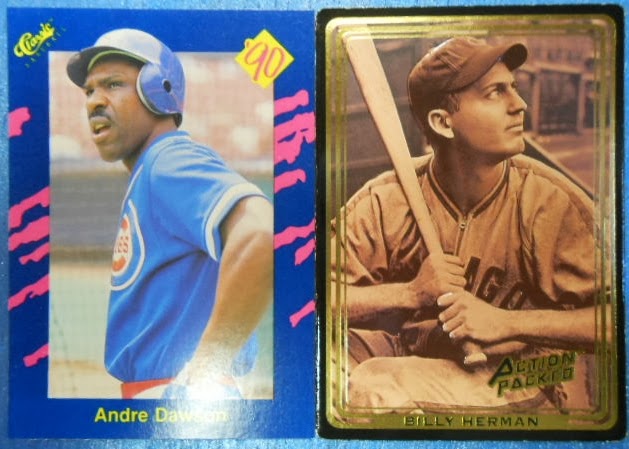 If you're a Cubs fan you're pretty much a collector of Ernie Banks and Billy Williams' cards by default.  I don't have many of either player, but rest assured they do have their own pages in my binders.  All four of the below cards are new to me.  Very nice! 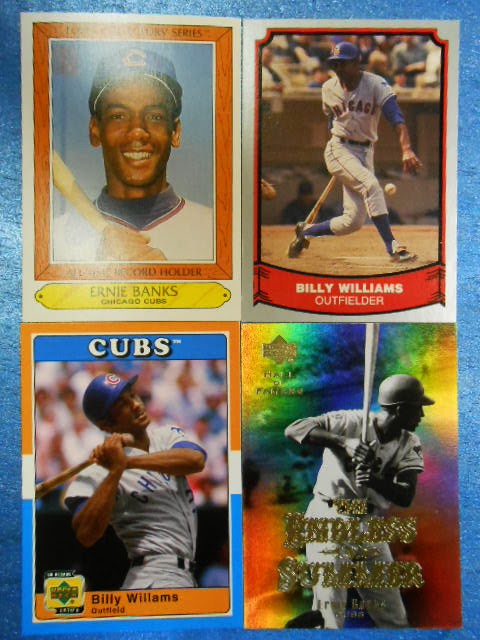 Here's a pair from the last decade who I frequently rooted hard for.  Derrek Lee was one of the good guys of baseball.  No doubt.  Big Z?  Well, let's just say I prefer to remember the good times, and this Biography card celebrates him homering in his 100th win.  Good times for sure. 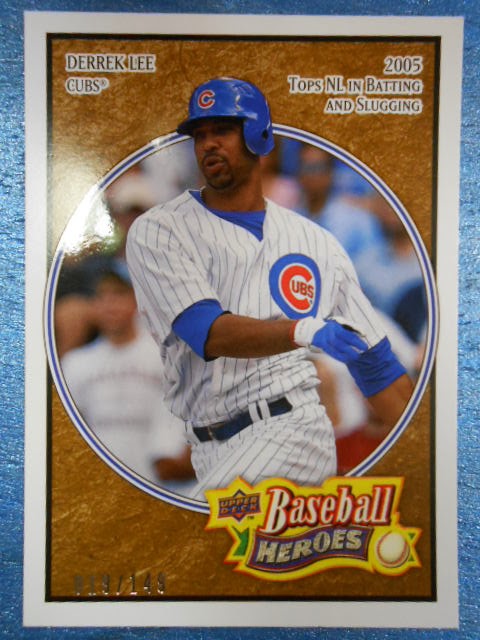 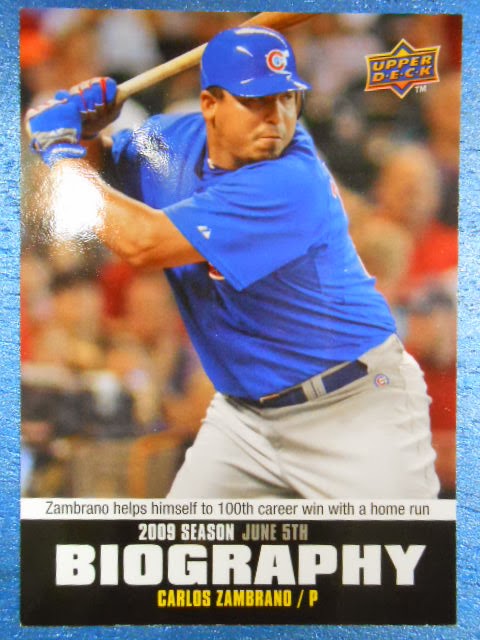 Do you need a break from the Chicago Cubs?  Okay.  But, just this once. 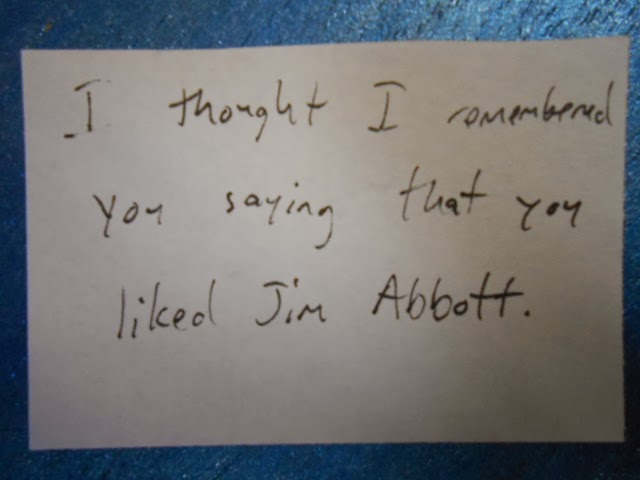 Nick, you are correct!  I haphazardly collect only a few non-Cubs, which include the likes of Abbott, Jackie Robinson, and Bo Jackson. 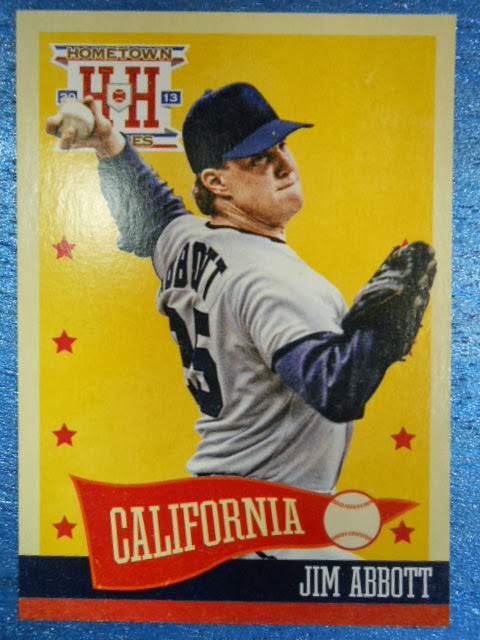 I must say, the checklist from 2013 Panini Hometown Heroes might be the best I've seen in a while.

Speaking of the best I've seen in a while...  On the left we have the last offensive Rookie of the Year to sport a Cubs jersey, Jerome Walton from 1989.  On the right is possibly the next one we'll see?  Yeah. I know it's a bit of a stretch, but if you have another helping of Cubbie Kool-Aid maybe you can see it, too? 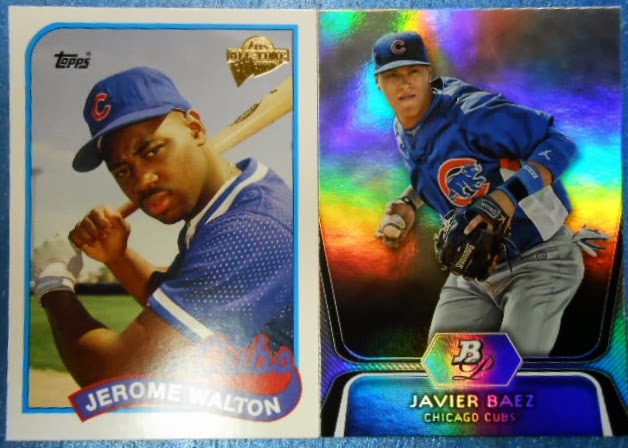 Let's transition from young guys to an old guy from when he was young. I have a few of Jamie Moyer's rookie cards, but this is my first issue from Fleer. 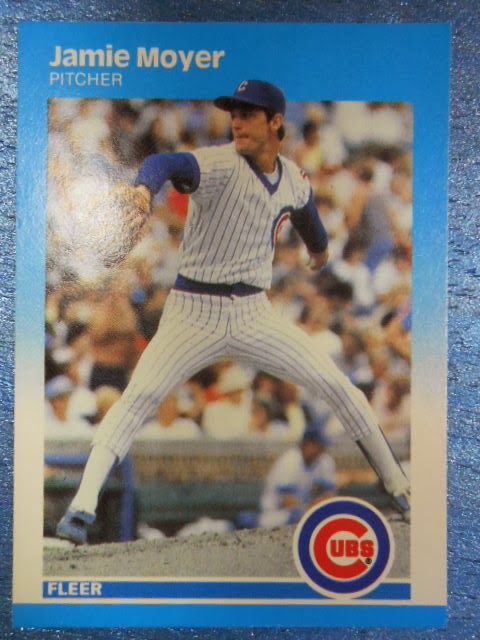 Moyer was known as quite a soft-tosser and on the other side of the spectrum there's Kerry Wood. 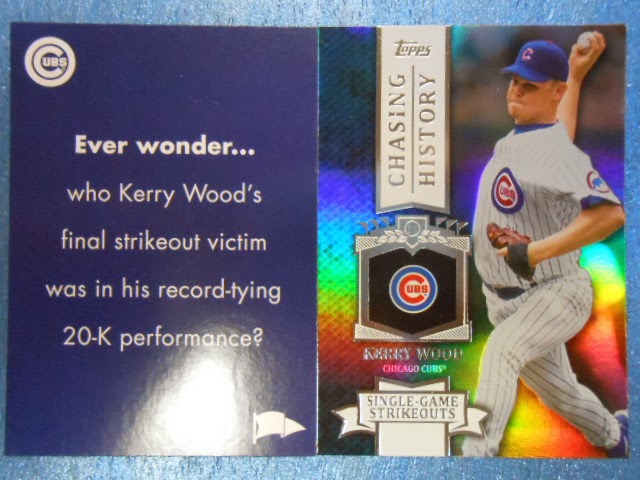 Nope, I never wonder who Kerry Wood's final strikeout victim was in his record-tying 20-K performance. Why not?  Because I know it was Derek Bell.  It's forever etched in my mind.

Hayden Simpson, the Cubs' first round pick in 2010, was supposed to help us all forget Kerry Wood. 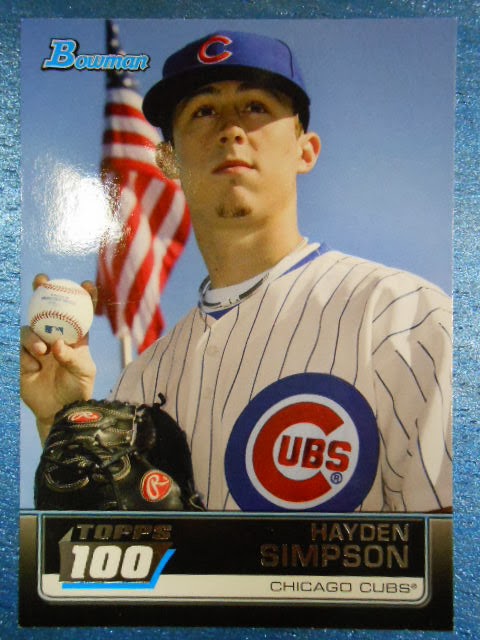 Talk about an epic fail.  Simpson was released last spring and threw up a 3.00 WHIP in the Frontier League in 2013.  For those of you not in the know, that's not very good. 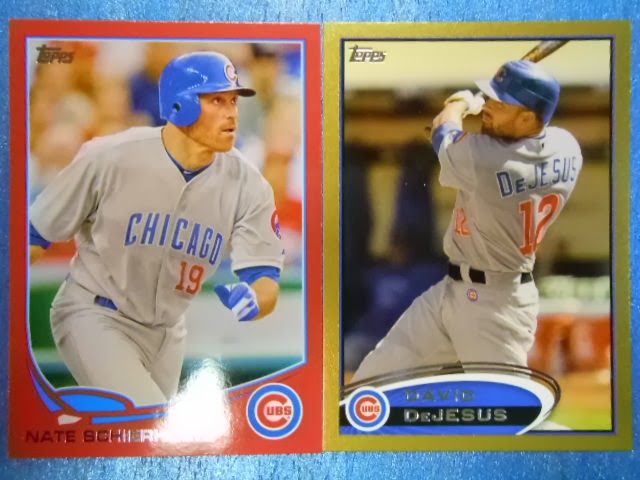 A red Nate Schierholtz and a gold of Kim DeJesus' husband.  Schierholtz will hopefully be a major contributor for the entire 2014 season.

I'm counting on a big rebound season for the Anthony Rizzo in 2014 as well.  Nothing crazy, but a 0.270 average and 25+ homeruns would be a nice start. 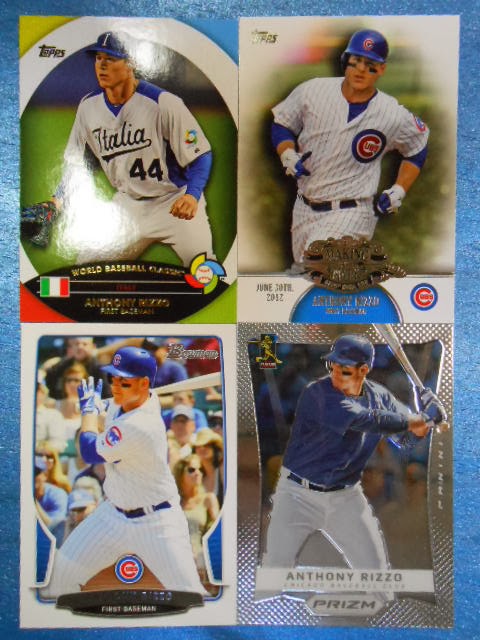 Lastly, my favorite card from the trade package.  A red parallel of Welington Castillo's 2013 Panini Prizm card.  What a beautiful card! 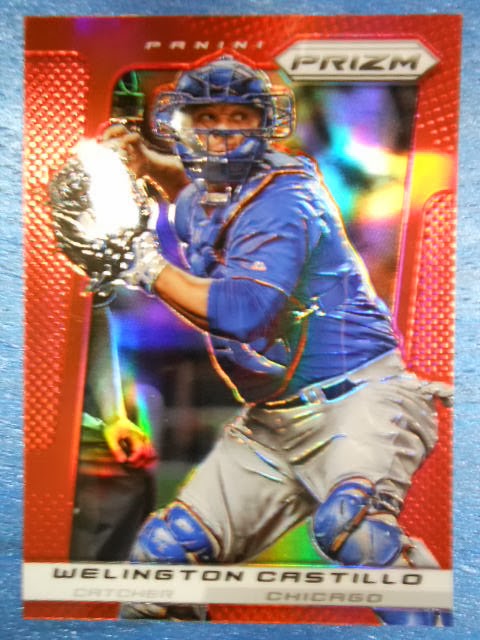 Beef or Welly, whatever nickname you want to peg him with, is quickly becoming one of my favorite Cubs.  It helps that he played a year in Peoria and I got to cheer for him on a regular basis.

Well folks, you probably were wondering when this trade package would end. What's crazy is I only took pictures of maybe a third of the cards.  Talk about your generosity!

Nick, this was a fantastic return trade and is greatly appreciated.  I hope you enjoy those '75 SSPCs!