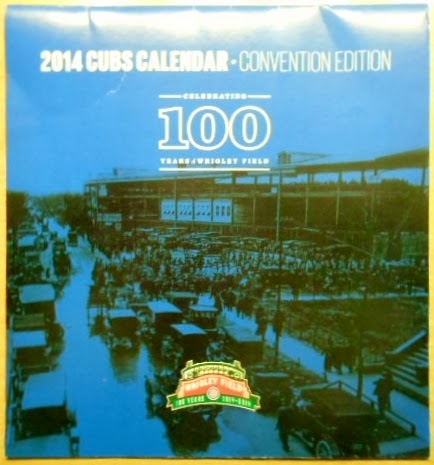 My buddy, Jeff, sent me a copy of the 2014 Cubs Calendar - Convention Edition.  I'm guessing this was a freebie from the recent Cubs Convention in Chicago during weekend of January 17-19.  I'm always in favor of surprise mail offerings and I was in need of a good calendar.  Thanks, Jeff!

So, let's dive in one month at a time.  Thankfully, we still have one day of January left before we need to turn the page. 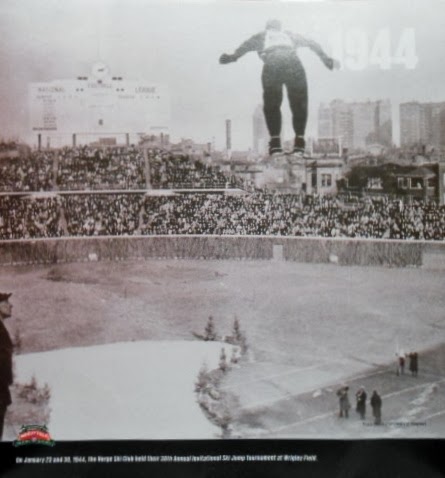 Each month's picture has a caption at the bottom, but this one did turn out so well from my photograph.  It reads, On January 23 and 30, 1944, the Norge Ski Club held their 38th Annual Invitational Ski Jump Tournament at Wrigley Field.

From what I know, P.K. Wrigley, the Cubs owner, was looking for any sort of revenue stream he could get his mitts on during the second World War and he was happy to have someone using the ballpark.  A slope was constructed from the press box area down toward home plate and skiers would land somewhere around second base.  From the picture you can see it looks like the field still had lines on it from football season, trees were brought in for aesthetics, and some snow was manufactured for the landing area. Pretty cool.

I've flipped through the calendar and the production staff did a nice job.  Actually, as JediJeff said recently, designing calendars has to be a pretty sweet gig.

As may know this is the Friendly Confines' centennial celebration and the designers in this case took a close look at the history of Wrigley Field for each month's photograph. 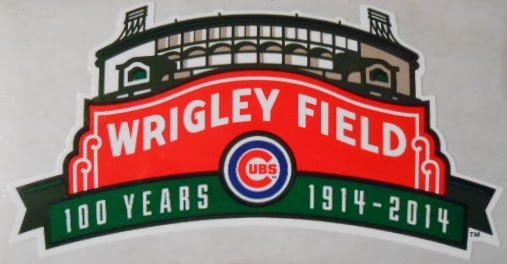 Wrigley has a storied history that few ballparks can match and it'll be fun to blog about the pages as the year goes by.  There are some great photographs so be sure to come back next month!
Posted by P-town Tom at 1/31/2014 06:30:00 AM