I made a trip to my local card shop the other day and I had a list going in I things I wanted to purchase.  I almost knocked out my 2012 Topps Opening Day set, which was a good start.

I saw a newly opened box of Topps Heritage Minor League Baseball sitting on the counter, so purchased a pack to see what the product was like.  Nearly half of the cards were farmhands of either the Giants or Yankees.  If anyone on the east or west coast is interested, theses can be had for cheap.

Nine cards for $3 and no Cubs in the pack.  Bummer.  To cap it off, I had the top prospect in the Matt Garza trade staring back at me.  I really enjoyed watching Lee play in Peoria and there was a time that I dreamed he would force Starlin Castro to move to third base.  But alas, I digress. 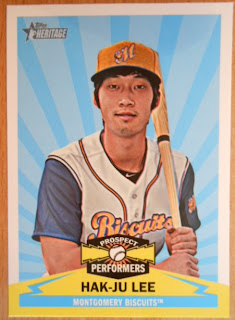 Another customer came into the store and required some attention so I turned mine to the vintage box.  Huh, 1955 Bowman?  When did these get here?  The names in the box didn't give me pause until I saw this Don Zimmer for $2.  Zim lead the Cubs to the playoffs in 1989 and is one of my favorite Cubs managers with Leo "The Lip" Durocher and "Sweet" Lou Piniella. 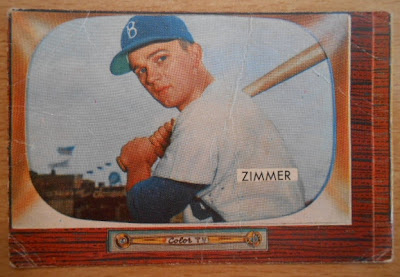 The card is badly miscut and there are a couple of creases to be found, like the one in the "n" in "Don" in the picture below.  No matter, it's a sweet rookie card of a future Cub! 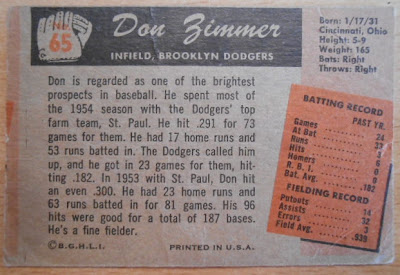 This Zimmer card is not only my first Brooklyn Dodger card, but it also represents my first vintage Bowman card.  I don't recall any action shots in the pile of cards I flipped through, but they were all framed in a Color TV like this one.  Kind of neat, especially when one considers that the color television was released in 1954.

Does anyone else feel that as they get older vintage materials become more desirable?  Maybe it's just me and baseball cards.  No, then again, there's my dad and Ed.  Perhaps I'm not alone on this after all!
Posted by P-town Tom at 10/10/2012 08:00:00 AM