Should've Been a Chief #3

*** This is post #3 of 5 featuring my favorite young Cubs prospects who should have been a Peoria Chief in 2013. 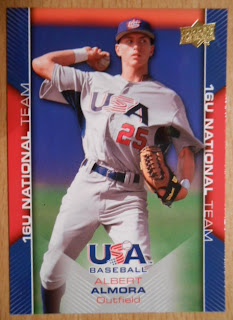 
Albert Almora was taken by the Cubs with the sixth overall selection of this year's June amateur draft.  Fresh out of high school in Hialeah, FL, Almora hit .321 between Mesa and Boise as an eighteen year old.

What I've read about Almora that impresses me the most is that he has been compared to Darwin Barney in terms of baseball IQ, work ethic, and desire to win.  Not a bad make-up if you ask me.  From what I have read, he possesses the speed and instincts to play centerfield at the major league level right now. Couple that with a bat that could produce upwards of twenty homers and an average north of .300 and we're talking about a potential All-Star player. 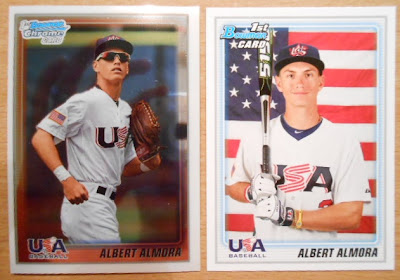 Many of his peers on the 2012 Boise squad this year were 2010 and 2011 draft picks; Albert was one of the younger players in the league and the youngest on the Boise Hawks.  As you can from the five different Almora cards that I own, he was a member on the 16U and 18U USA National Teams that have competed recently in international competition.  He has more experience against top talent than most players his age. As a result I look for Almora to move quickly through the Cubs farm system. 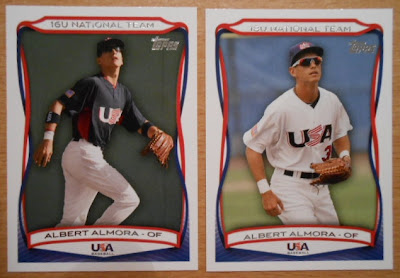 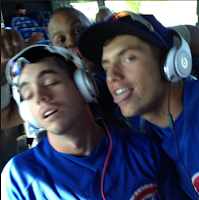 I guess I shouldn't be too disappointed that Almora won't have a chance to play for my Chiefs next summer, as I'm of the mindset that he wouldn't need more than one hot month at the plate to earn a promotion to the next level.

On a side note: Almora a good follow on Twitter, @AlbertAlmora.  He doesn't tweet a ton and when he does it's almost always strictly baseball.  Here's a picture of Stephen Bruno he took on a bus trip after a game.  I feel bad for Bruno.  I remember bus rides with the team and the last thing you wanted was the first one to fall asleep.
Good luck next year, Albert!  Hope to see you roaming Wrigley's outfield within a couple of years!