Should've Been a Chief #2

*** This is post #4 of 5 featuring my favorite young Cubs prospects who should have been a Peoria Chief in 2013. 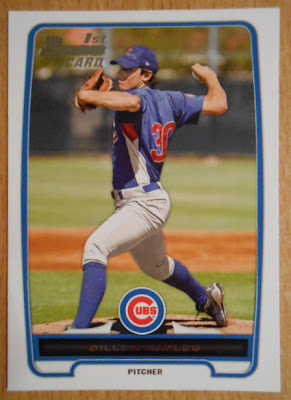 
Dillon Maples was drafted in the 15th Round of the 2011 June draft by the Cubs.  He was projected to go much higher in the draft, possibly within the top three rounds, but fell as far as he did because he was threatening to go play college football for the University of North Carolina.  The Cubs threw him a $2.5 million signing bonus, he said goodbye to football, and he immediately became the Cubs number one pitching prospect.

Maples, much like Almora, has played against some stiff competition.  He was a member of the 2010 U18 Team USA where he pitched 11 innings, allowing just one run on two hits, while striking out twelve.  Dillon was a 2010 AFLAC All-American and a 2011 second-team Baseball America All-American. He's a special talent and has a filthy arsenal, especially when he pitches with command.

He is said to throw in the mid-90s and possess a hammer curve.  But, Maples has also had some injury problems early in his career that limited him to only six games this summer at Mesa.  Put the previous two statements together and images of Kerry Wood come dancing into my head.

I don't think the Cubs will rush Maples and they'll look to work on his mechanics as much as possible to protect their investment in him.  He might start next season in Boise, but I was hoping that the 2012 draft class, which also claims some nice pitching talent, would push him to Peoria, well, er... Kane County.

As you can see throughout the post, I may have gone a little overboard with the Dillon Maples cards.  But hey, I've heard of other bloggers talk about collecting the rainbow. This was my attempt and Dillon Maples' cards were relatively cheap compared to Starlin Castro and Anthony Rizzo. I'm still missing a "Red Ice" and an "Orange Chrome," but not many have shown up on Ebay.  When they did appear on Ebay they were too expensive for this modest baseball card blog to support. Maybe some day I'll find a good deal?

My favorite is the Blue Wave card, it's really cool to look at in person, but doesn't photograph too well.  The on-card autograph card is really nice too, and I was able to score it for only $4.04!  Sweet deal!

Anyway, I love my pitchers when they throw mid-90s heat, drop curveballs off tables, and make the opposing hitters wish they hadn't gotten on the bed in the morning.  I think Dillon Maples is that guy and with any luck he'll be featured in many more Bowman baseball cards in the future.