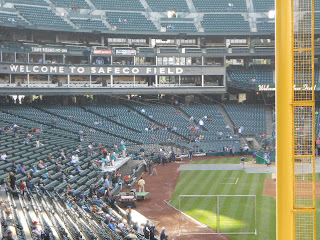 This year I saw Major League Baseball played in six different ballparks, and none of those contests were my home state of Illinois.  Three of the ballparks I had seen before (Busch Stadium, Kauffman Stadium, Safeco Field) and I happily crossed Target Field, Coors Field, and Citi Field off my ballpark list for the first time.

On Friday, September 20th, Jeff, Nichole, and I flew out to visit our good friends Jon & Becky.  Jon is currently working out of Fort Lewis, which is south of Seattle, and we thought it was a good opportunity to catch up and see a game. 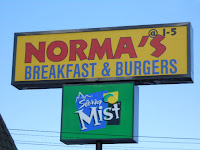 The girls spent Saturday at the spa and the guys babysat and watched football.  Then it was our turn to have some fun.  First, had dinner at Norma's, which I've been told is supposedly better than In-N-Out Burger.  Never had the latter, but the General Patton burger, topped with jalapenos, bacon, and pineapple slices, was a great way to start the evening.

We arrived at Safeco Field less than hour later.  We paid $25 to park on the fourth floor of the parking deck next to field.  Yeah, that was a chaotic mess after the game.  Never again. 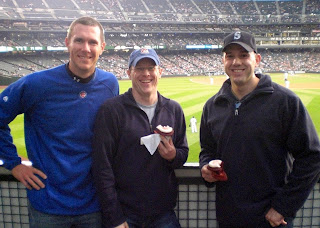 This was my second trip to Safeco Field, but the first time was a few years ago during a tour of the ballpark when the team was on the road.  Nothing beats a game day atmosphere!

The field is beautiful and the evening's weather was just perfect.  Jeff, Jeff, and I had great seats down the third base line that provided an excellent view.

The crowd was a little thin, but that was fine as we were just there to catch up, share a few drinks, have a few laughs, and enjoy the good life.

The highlight of the evening had to be the garlic fries, but Jon and Jeff also had red velvet cupcakes that they were pretty happy with.

I was able to get my photo taken with the Mariner Moose.  He was such a cool moose and even had his own den.  What a life!  He gets to live at the ballpark and eat garlic fries and cupcakes!

For the record, the Mariners won 1 to 0 in two hours and twenty-one minutes behind strong pitching from Blake Beavan and a home run off the bat of Michael Saunders.

It was a whirlwind of a trip as we returned back home to Illinois on Sunday, but well worth the time on a plane to see Jon, Becky, and their two kids.