Should've Been a Chief #5

*** This is post #1 of 5 featuring my favorite young Cubs prospects who should have been a Peoria Chief in 2013. 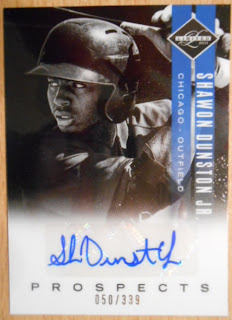 The 'Jr.' at the end of the name probably gives it away, but he is the son of former #1 draft pick and shortstop of the Cubs, Shawon Dunston, Sr., who just happens to be a favorite player of mine. I was able to pick up Jr.'s autograph on Ebay a little while back, and now I have my first father & son autograph cards!


Shawon was drafted with the 11th pick in the 2011 draft and he made his professional debut in Boise this year and finished the season in Mesa.  I followed Dunston on Twitter for a while (@DonnyDShay333), but the guy blew up my Twitter feed and I had to drop him.  He has a lot to say, most of it is baseball related, and he seems like a pretty good guy.

The main reason he makes this list is two-fold:
1) I think he has the talent to potentially be a solid lead-off hitter
and
2) I would have loved bringing the Shawon-O-Meter to Peoria Chiefs games, doing quick math after each at-bat of his, and posting his new average for all to see.

The original Shawon-O-Meter was a fixture a Wrigley Field for a span in late 80's and early 90's.  My friends and I would have loved cheering him on with the hopes of seeing his average rise. Oh, the fun we could have had!

Good luck with your career, Shawon, and I hope to see you playing with the Kane County Cougars in Peoria soon! 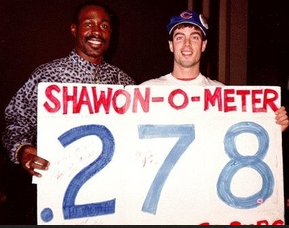 ** For the record, I have no idea who the Cub fan is holding the Shawon-O-Meter sign with Dunston.