Lions and Elephants and Bears! Oh, My!

On Monday night I drove to Jeremy and Mikelle's house to watch the Bears versus Lions game on ESPN.  I don't have cable or satellite, so thank you to the other family and friends that also extended an invitation.

During commercial breaks and injury timeouts I tried to teach the youngest how to draw a star with markers*, but she was more concerned with my ability, or apparent lack thereof, to replicate her artistic renderings of the sun.

*Markers?  Yeah, totally should have looked for a safer medium.

Meanwhile, the older daughter was upstairs and soon appeared at halftime with a present for me! 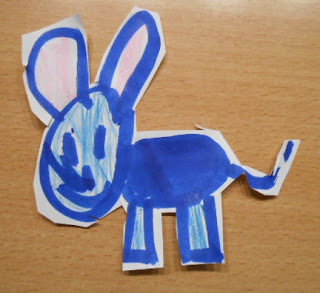 What goes great with Lions and Bears?  Homemade elephants of course!  A little part of me went, "Oooooh, how sweet!"

I think I'll take it to school and put the elephant on the wall next to the other artwork I've been given.  Thanks, Kylie!

Email ThisBlogThis!Share to TwitterShare to FacebookShare to Pinterest
Labels: friends