The Boys Who Would Be Chiefs 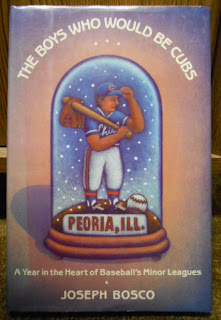 I first started going to Peoria Chiefs games during the summer of 1988.   The owners of the business where my father worked owned season tickets for four box seats.  Whenever they weren't going to attend, the tcikets were free for the taking by any of the employees.

What's better than attending minor league baseball games on a somewhat regular basis when you're ten?  Nothing.  Absolutely nothing.

The Chiefs were a 0.500 club in '88, which isn't very special in itself, but the fact that it has been documented in a published book is unique.

The Boys Who Would Be Cubs features the firsthand recollections of the author as he traveled with the team for the full 140 game season.   That team featured two future Cubs in Rick Wilkins and Frank Castillo.  Jim Tracy was also cutting his teeth as a manager.  The author, Joseph Bosco, was allowed to ride the bus, sit in on conversations between Tracy and his staff, and hang out with the players.  It was an entertaining read, especially for someone as connected to the '88 season as myself.

Fast forward twenty-four years later and we find the Chicago Cubs have ended their relationship with the Peoria Chiefs, for the second time in Peoria's franchise history.  Last month the Cubs signed a new player development contract with the Kane County Cougars.  I'll still get to see my future Cubs in action, but only a half dozen times or so each summer, rather than an entire home schedule.   What a bummer for this Cubs fan.

So, I thought I would do a post on the top 5 prospects that I was hoping I would see play on a regular basis in Peoria next summer.  I've had my eye on eleven youngsters who were playing in Boise or Mesa this summer, but I figure eleven would have been overkill.  The others that didn't make the cut who were considered: Jeimer Candelario, Gioskar Amaya, Duane Underwood, Paul Blackburn, Juan Paniagua, and Trevor Gretzky*.

Please, keep in mind, this will not be a Top Prospect list in the traditional sense, but a list of prospects that I had hoped would grace Peoria with their baseball talents during the 2013 season.  The Cubs are farm system is chock full of talent at the lower levels, so this should be fun!