The One(s) That Almost Got Away

I worked out a quick trade with Captain Canuck, the proprietor of Waxaholic, to finish off my 2014 Bowman set which was part of the prize from My Cardboard Habit, with the remaining cards being shipped off to It's Like Having My Own Card Shop and The Raz Card Blog. (Side note: plugs for four different blogs in one sentence is a new record for me!) 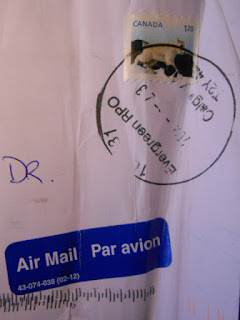 A PWE from the great white north arrived yesterday and I was pretty excited to rip it open, except for one thing:

There was already nice 2.5" rip at one of the ends of the envelope.  Yikes!  And worse yet, there was a card of sizable thickness peaking through!

Luckily for me Captain Canuck taped down the cards to a piece of cardboard or else I might have lost Ernie! 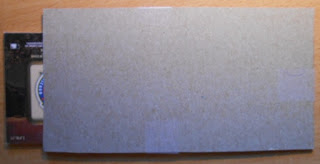 Thankfully the cardboard was wider than the tear in the envelope.  Whew! 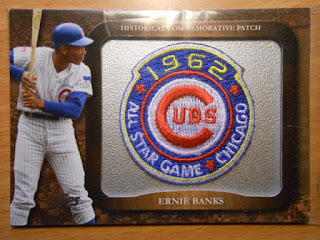 This a 2009 manu-patch commemorating when the Cubs hosted the All-Star game in 1962.  It's in really good condition despite it apparently craving a little fresh air during it's travels across the border.  I can't say that I blame it.  I honeymooned in Alberta and the air is super fresh up there and the scenery is oh so beautiful.

Ernie was accompanied by two other cards on his journey: one of which was the aforementioned Bowman card. 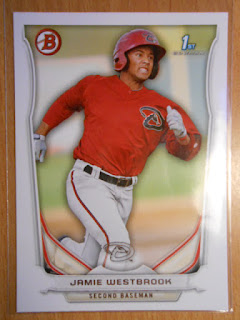 Woo-Hoo!  My set is complete!

And the other is the 2015 flagship card of a flying Jason Kipnis. 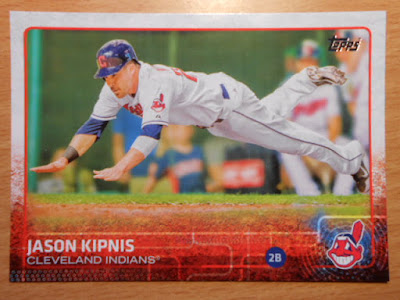 This card formerly resided in the side bar as one of my "Top 5 Most Wanted Cards".  Why?  Well, because I really liked the action shot.  I don't really have any other connection to Kipnis other than him carrying my fantasy team.

For what it's worth, the Flying Kipnis has been replaced by a hopeful addition to my Cubs FrankenSet: the 1964 Topps #233 Ken Hubbs In Memoriam card.  Thanks for the suggestion, HSCA.