Two posts ago I mentioned that I was going to meet George Brett.  Um, yeah . . . about that . . . Two of my really good friends, one of which is a stalker of Brett die-hard Royals fan, bid on a silent auction to attend the Royals' game on June 20th.  Through third party information they thought they were bidding on box seats, on-field passes, and a meet-n-greet with the Hall of Fame slugger.  As it turns out there were some wires crossed and they ended up with seats in the shade for a 95 degree scorcher.  Not a bad consolation prize, because returning to P-town with heat stroke after a 350 mile drive is not my idea of fun. 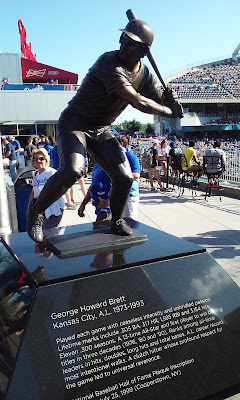 I suppose it's all for the best, because as I stated before, I don't have the innate ability to form complete sentences around professional athletes without looking like a bumbling idiot.

It was my third trip to "The K" and as always I had to indulge in some of 'Merica's best barbecue beforehand.  This time it was Arthur Bryant's. 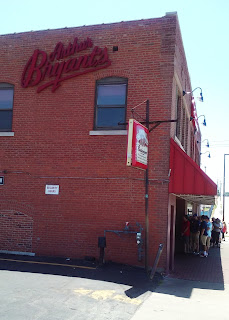 The line was about fifty or so people deep, it curled outside, and it continued to form down the street.   It was already after one o'clock, but my friend and I stood and waited patiently as our stomachs reminded us of how hungry we were each time we took a deep breath to enjoy the free smells.  We could tell we were in for a treat. 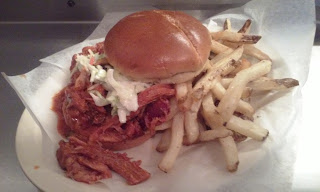 It was a no frills restaurant, but the food was the thrill.  I enjoyed the "Pig on a Bun" sandwich, which combined later with an adult beverage at the game, was enough to feed me the rest of the day.  They don't mess around with their barbecue in Kansas City!

After lunch we had about two hours to kill so we went a couple of blocks down from Arthur Bryant's and toured the Negro Leagues Baseball Museum.  This was my second time through the museum, but Jim's first.
I love baseball history, anecdotes, memorabilia, and learning.  I felt right at home. 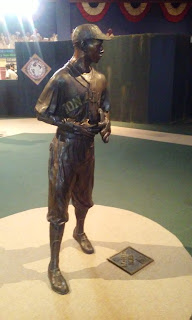 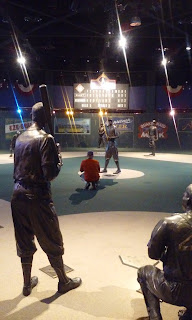 It's a really well done museum, but my favorite part is the scaled down baseball field in the middle of the exhibit which contains life-size statues of The Negro League's best players by position.  Satchel Paige is my favorite!  He seems like he was quite the character and quite a pitcher in his day!

After our tour through the museum we checked into our motel, cranked up the AC, and made our way to ballpark.

They Royals renovated Kauffman Stadium before the 2009 season to the tune of $250 million, and overall they did a wonderful job, but there are still some places which leave me shaking my head. 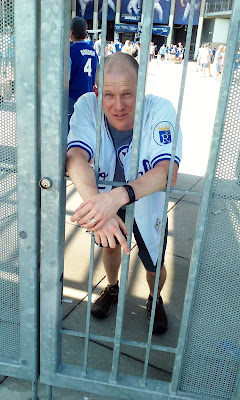 For instance, we found this guy at one of the main gates "resting in the shade", but if you ask me it looks as though he's already been sentenced to spend the game in Royals Jail.  AmIright?

I always like to take pictures at any ballpark and one of the fountains in the outfield surprised me on this shot. 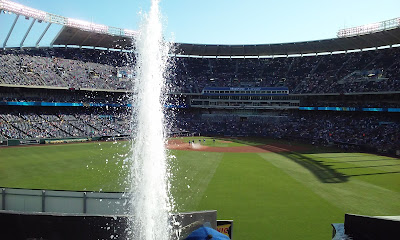 Would it have been too much to allow the fans access to the fountains on such a hot day?

If you recall, I like to celebrate the checking off each new MLB stadium from my list.  As I said before, this was not my first trip to see the Royals, but I didn't have a bobblehead on my shelf until now.  Thank goodness for promotions! 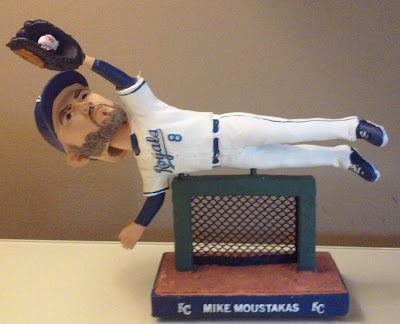 This bobblehead depicts a great moment in Game 3 of the 2014 ALCS.  If you didn't see the play, then take the time to watch the twelve second video below.


My favorite part of Saturday's game was when Mike Moustakas came through with an RBI single in the sixth inning.  Hearing 39,000+ Royals fans bellow Mooooooooooooooooooooose was just great!  If Moustakas was a Cub, then he definitely would be my favorite player.  Hands down.

Overall, it was a great getaway trip to the Kansas-Missouri border.  Seeing Jeff and Nichole again was probably the highlight, but the barbecue, museum, game, and talking baseball with Jim during the car ride are all right up there.