Cards I Used to Own (a gcrl inspired post)

gcrl had a nice post this morning about the cards he used to own and his feelings about them.  he has challenged the blogosphere to reminisce about cardboard past and it sounds like a fun exercise.  as an added bonus, i will pretend my caps lock and shift keys are broken in typical gcrl style.

i buy a fair amount of wax and occasionally i'll pull down a nice hit. 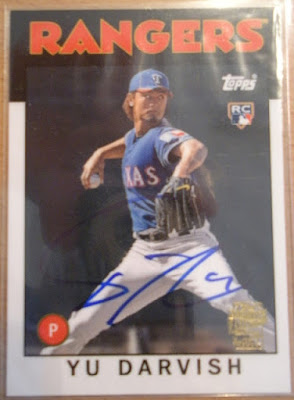 the card itself still has decent value, but i struck while the iron was hot and sold it on ebay.  i used the money to invest in more baseball cards of the chicago cubs variety.  no regrets whatsoever.

(aside note: it's actually pretty difficult to not use capital letters when typing. trying to do this consistently would drive me mad; my backspace keep is getting a workout!)

remember when topps had us all digging for diamonds back in 2011? 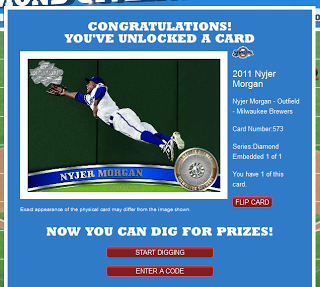 i flipped tony plush for three figures on ebay; looking at current ebay prices it seems that these cards have held there value nicely.  i thought about keeping the card at one point, but then decided it was silly to have a diamond embedded in a card.  besides, it wasn't a cub.  i like the laundry tags and buttons, because they're from the actually jerseys themselves, but the diamond really just doesn't fit in my mind's eye.

next up is a card i recently sent to jaybarkerfan's junk, and i'm quite happy i did. 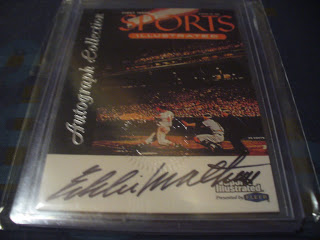 i won this eddie mathews autograph card by participating in a sportlots.com contest about five years ago or so. the sportlots people would pick a card in their database and then give out clues for users to find it.  it was during the summer months when i won the mathews card and i was at a huge advantage because i could scour the internet for hours looking through stats and facts to help me win.  what else does a teacher have to do during the summer?

anyway, the card never really had a home in my collection, but it was a certified auto of a hall of famer so i figured it would make for some good trade bait down the road.  pairing the card with first edition of sports illustrated made for one heckuva of a return trade package!

the last card i'll add to this section is a keeper.

watching kris bryant autographs on ebay has been a guilty pleasure of mine the last few months, but no longer!

chris, from nachos grande, pulled the 2015 topps archives redemption for me!  let the waiting game begin, which you may have seen on the right side bar.

the last card for this post is by far my favorite of the bunch.  actually, it may be my favorite card in my collection.  that is not meant to be a slight on any of the cards that i may have received from you, my blogging brethren, through trades and the like.

but like many of you, i was a card collecting kid, went on hiatus for a decade or more and then came back to the hobby.  this card takes me back to the days before adulthood. 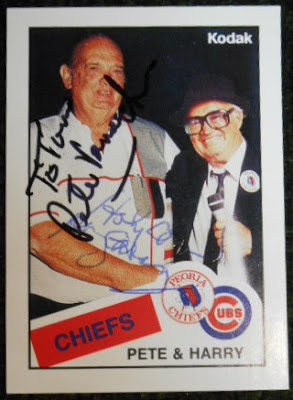 this card was part of my very first peoria chiefs team set.  i loved that set, had it in a binder, and had every player's name and face committed to memory.  eleven year old me was an autograph hound and back then i had no trouble collecting autographs, but i was only after the players.  a card with pete and harry didn't really draw my interest.

some time in the early 1990's my family attended a cubs game at wrigley field.  i'm still not sure how he did it, but my dad was able to secure a brief moment of time with harry caray.  my dad had the card with him and harry's pen reads, "holy cow! harry caray".   every cub fan knew of harry caray.  i was so stoked.

it didn't strike me until much later to ask pete vonachen, the "father of minor league baseball", for his autograph.

fast forward a good ten years or so . . . i was still single, but i had started my career, and i was attending peoria chiefs baseball games at a huge clip.  my sister, who was an intern for the chiefs, would help score my friend and i tickets.  we would usually go down to the park, have a couple of adult beverages, look at the talent (on and off the field) and then finish the evening in downtown p-town.  sometime during the summer of 2002, when i briefly entered the hobby long enough to discover topps total, i asked pete for his autograph. i would always say "hi" to pete on the concourse.  even though i was just another fan to him, he was one of those people who i have always held in very high regard: he brought baseball and managed to keep the game i love in peoria!

it's hard to top a card which has ties to myself as a young collector, my dad, the cubs, the chiefs, and pete & harry.

zippy zappy posted the other evening about his top ten cards and which ones he would take to the grave with him.  the kris bryant auto?  meh.  i'm mostly just excited because i didn't think i would ever have the opportunity to own one.  i am a card collector on a budget afterall.   the pete & harry card?  YEP!

shoot.  i almost made it the whole post without using any capital letters.  :)