One Good Contest Deserves Another

Amazingly, I won a recent contest from My Cardboard Habit involving a medium-size flat-rate USPS mailer full of 2014 Bowman. 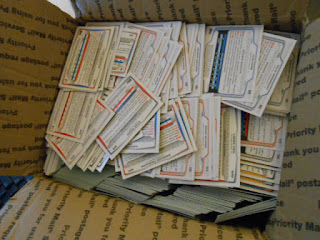 I opened up the box from the bottom side and got to sorting!  And I sorted . . . and collated . . . and sorted some more.  I haven't had this many cards to sort since eleven-year-old me went whole hog on 1989 Topps.

Here's some of the highlights as I saw them: 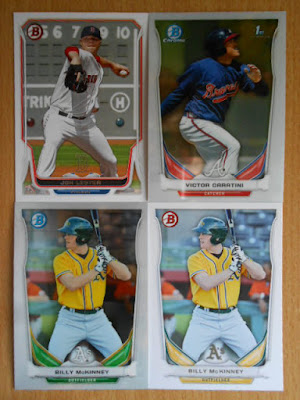 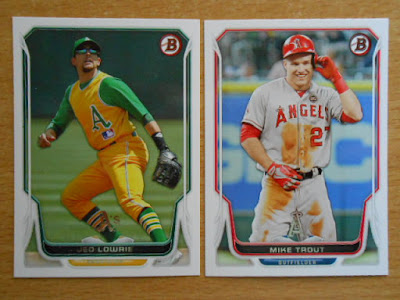 These were two of my favorite cards in the lot.  The uniform Lowrie is wearing is just remarkable, although the jury is still out deciding if it's remarkably bad or good.  And hey, what's not to like about a smiling and dirty Mike Trout? 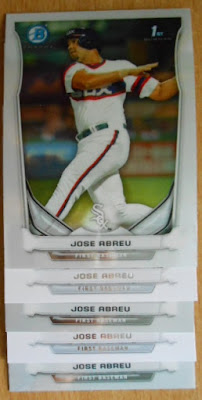 I found a healthy stack of Jose Abreu's first Bowman card.  That was a nice surprise! 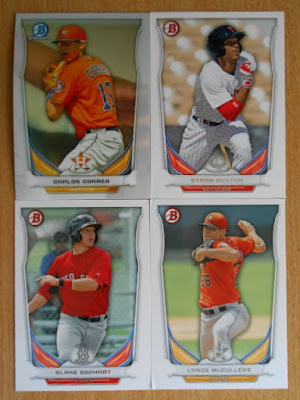 It seems like 2015 has been the year of the rookie and here's a quartet of guys who have made their debuts this year: Correa, Buxton, Swihart, and McCullers.

Oh, and there was definitely a healthy stack of Cubs, including a couple Kris Bryant cards. 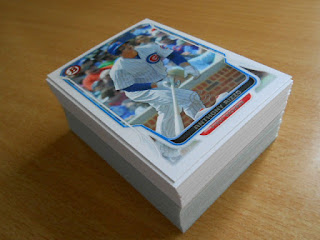 In all there were over 2,500 cards in the box, which is just silly.  Judson must have broken open a boat load of '14 Bowman!

After collating I found that I had the makings for nearly three complete sets.  In this case, I'm talking about the veterans (1-220), the paper prospects (BP1-BP110) AND the chrome prospects (BCP1-BCP110).

The first set is missing four cards, which I'm hoping to find at my LCS later today.  This set and a few other cards will stay in my collection.  You guessed it, they are mostly Cubs.  I'm nothing if not predictable.

The rest of the cards will be randomed off to two lucky participants.

Here's the scoop on the CONTEST:
1) Leave a comment and you're entered . . . it's that simple!
2) Want and extra entry? Make a plug on your blog and let me know you have done so.
3) Do so before this Sunday, noon CDT

WINNER #1
I will random the entries three times and the person at the top of the list after the 3rd randomization will receive: 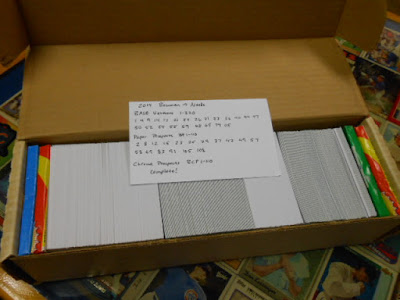 WINNER #2
Since the person at the bottom of the list never seems to receive any love, you'll win this:
Again, a wantlist for the third 2014 Bowman set I collated, which has 358 of the 440 cards.
Plus: two stacks of prospects labeled with a TP or DP from the Bowman Draft and Prospects set AND all of the duplicates after trying to complete three sets.  Um, yeah, about that . . . I don't have room for that nonsense in my man cave. In some cases we're talking about 6 or 7 duplicates AFTER cards had been pulled for the three sets.  That's just too much. So yeah, if you're into Bipping people then this is for you.

One last heads: I use unopened junk wax for filler in boxes when shipping.  Fun-fun!

Judson, thanks for your contest, which has given me a 2014 Bowman set and allowed me to host a contest of my own!