My portion of the Nachos Grande 2015 Topps Archives case break arrived yesterday, and I must say that I am pretty pleased my haul!

For a modest fee I was able to pick up the Chicago Cubs and I was given one random team, which wound up being the World Champion Giants.  Not a bad team to pull through randomization if you ask me!

The Giants actually did really well, including a master set as well as three additional bases sets. 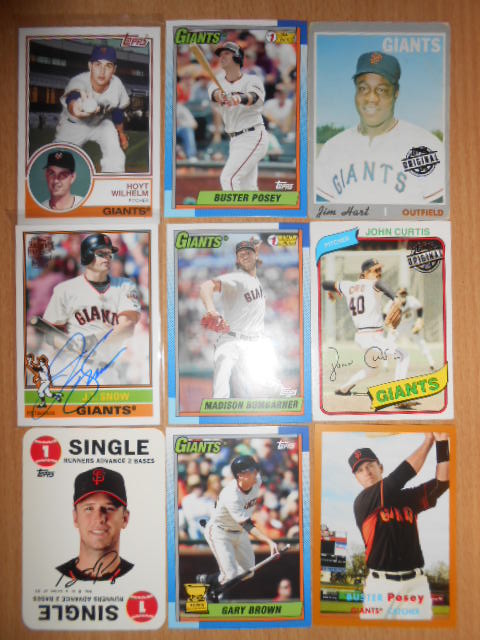 I traded the Will Ferrell Giants card to Nachos Grande, but otherwise I think he pulled every Giant insert card and a JT Snow autograph to boot!  Additionally, there's a gold parallel (#'d to 50) of Buster Posey and a Hoyt Wilhelm SP.  Man, those SPs are crazy hard to pull!

I don't really have a place for Giants in my collection so I've already worked out a trade to ship them off to ARPSmith.
I'm sure he'll enjoy them!

I'll save you the boredom of the five card Cubs base set, as it has already been broken down over at Wrigley Wax. So, on to the inserts!

First up, we have the Rookie Cup cards in the 1990 Topps design.  It seems like Topps is on the Baez bandwagon and it's nice to have a little variation, so I was glad Soler was given a card in this insert set. 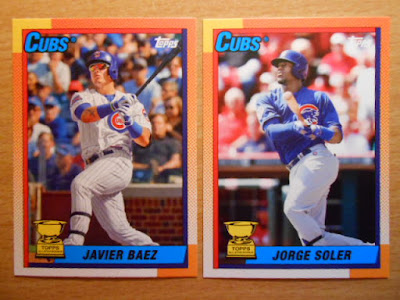 Wrigley Wax showed off the 1968 Game cards as well, but I had to show them again because they are so neat. 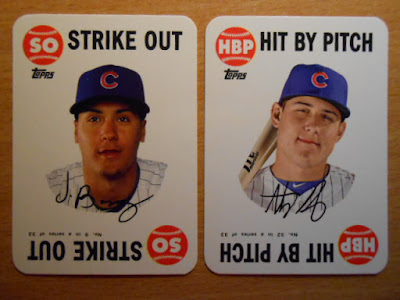 Topps takes a bunch of heat from the blogging community for many of its decisions or lack of thought, but they nailed these two cards.  Baez displayed last year in his brief call-up that he was a prolific strike out artist, and Rizzo is leading the league in in being struck by pitches.  Nice job, Topps.

Here's the Will Ferrell card and a 1972 Topps buyback card of Paul Popovich.  I'm not really sure what to do with the buyback card.  What do you guys/gals do with yours? 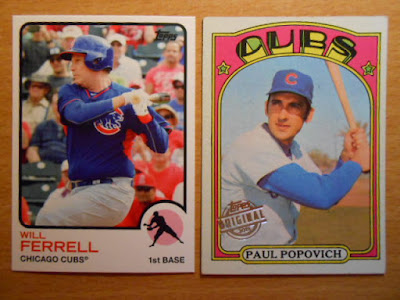 I think everyone has seen the front of the ten different Will Ferrell cards, so here's the back of his Cub card. 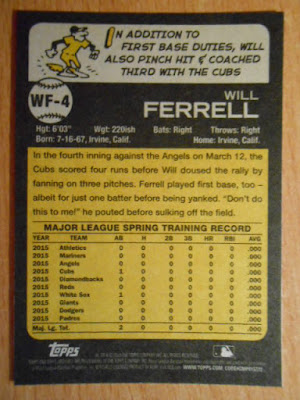 I like that they have his full playing career day on the back and his listed weight is pretty hilarious!

There are FIVE short prints in this year's Archives, which makes it nearly impossible for a team collector on a budget to knock out.  Argh.   But in my opinion Chris pulled something even better . . . autographs! 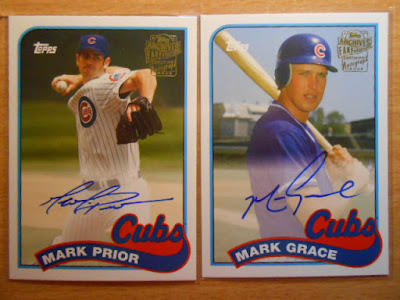 The autographs on the 1989 design do look really nice.  No?

I have a couple of Grace signatures in my collection, but this is my first certified autograph.  This is my third Prior autograph and it's a shame he's already considered eligible for the Fan Favorites Autographs.  I'm not arguing his selection, but he's only 34 and if it weren't for injuries he should be contributing for some MLB team. 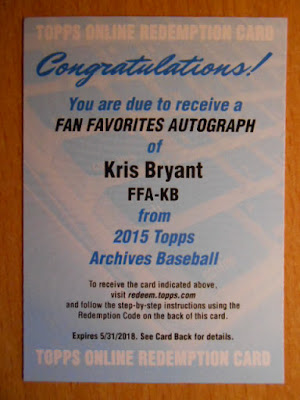 To be completely honest, the main reason I entered the Nachos Grande case break was just for a chance to pull this card.  I never actually thought it would happen, and after coming up empty in the first seven boxes I had resigned to the fact that I was going to be shut out.  Then box #8 happened and it was victory lap time!

I put in the redemption code this morning and now the waiting game begins.  My LCS owner said that a customer pulled a Topps Finest Bryant redemption and that individual called Topps and asked when he might see his card. The answer he was given was in the September to October range.

I must have patience, which shouldn't be a problem.  I'm a Cub fan so I have a lifetime of patience!  Right?
(No, seriously.  Topps, don't cross me.)

Thanks for hosting the group break, Chris!  I know that they can be a lot of work, but you have one VERY happy customer in P-town!