What do you get the guy who seemingly has everything?

I received a PWE from Nick, the Dime Box King, earlier this week.  Nick recently posted pictures of his "man cave" which highlighted his collection.  Talk about intimidating!

One thing I noticed about Nick's collection was how organized his collection seems to be.  I have great appreciation for order and organization.  Yeah, math teachers are like that.

The other thing I'd like to share with you about Nick is that his knowledge of cardboard far surpasses mine.  He's frequently referencing cards and entire sets of which I'm completely oblivious to.  The best example of this is his Dime Box Frankenset.  What an awesome collection of cards!

It's going to take some serious searching to find something Nick may not have as a thank for his generous PWE.

What was in the PWE? 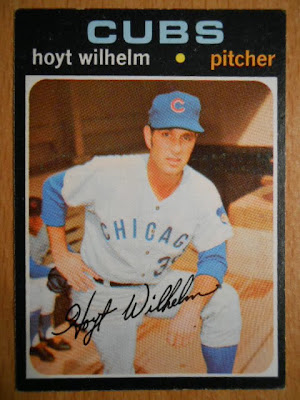 Gosh, if Hoyt Wilhelm doesn't appear as though he's twenty-five years old on this 1971 Topps card.  Yet, the back states that Mr. Wilhelm was born in 1923.  Um, so he was 47 when they took his photo?  Can that be right?

Holy Cow.  Hoyt pitched in three games for the Cubs in 1970, when he was 47 years old, and then he played two more seasons for Braves and Dodgers!  You learn something new everyday. 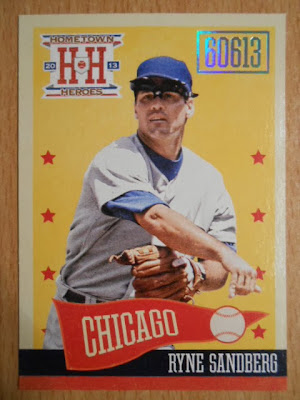 Ryne Sandberg!  This is his 2013 Hometown Heroes card from Panini.  I believe this one is the "zip code parallel".  Cool stuff.  If I had to do it over, I think I would have saved my cardboard cash and bought a few boxes of this set rather than 2013 Bowman.  The FrankenSet I've made has been fun, but I really like the look and feel of these cards.  Oh, and have you seen the checklist? What a great collection of players! 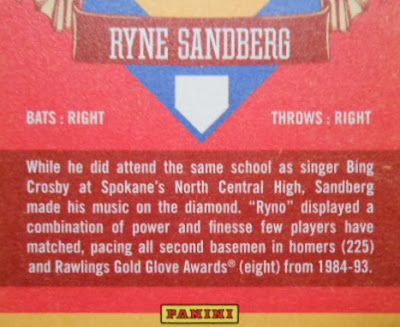 Man, it's winter break, yet I can't stop learning new tidbits.  Bing Crosby is an alum of the high school that Sandberg attended, North Central High.  That information and three dollars would get me a pack of Hometown Heroes.

Speaking of Ryno's alma mater, let's take a look at the last card in the PWE. 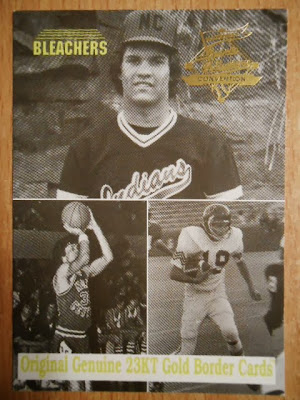 Another nifty Sandberg, but this one captures him as a three sport athlete.  Nice.

Thanks for a the PWE surprise, Nick!  Blog on my friend, for yours is one of my favorites.