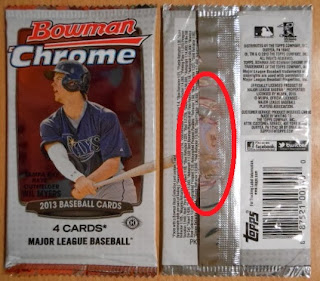 We've got something a little different for you Pack Wars fans out there tonight.  An unexpected PWE arrived in the mail today and out dropped a pack of 2013 Bowman Chrome.  Sweet!  Just yesterday I visited my local card shop and purchased such a pack with the hopes of finding something noteworthy in attempt to upgrade my Bowman FrankenSet.  So, on the above left we have the 4 card pack of '13 Bowman Chrome from my LCS and on the right we have a pack from Zippy Zappy. 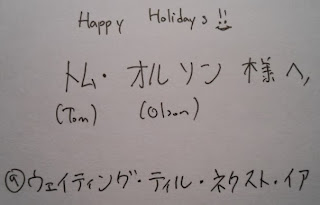 Zippy Zappy is probably the funnest non-blogging Yankee fan that I know. I'm acquaintances with a couple other of Yankee fans and they drive me nuts.  Zippy Zappy?  Yeah, totally keeping me off balance and loving it!

Alright, now back to the Pack Wars!

Now, please keep in mind, this should be a fair fight, but knowing the Zapster as I do... well, let's just say I don't think the LCS factory sealed pack of four cards has a chance.

Oh, didn't you notice the red oval at the top on the Zippy Zappy Pack?  No?  This pack is not factory sealed.  Not sure if you can make it out, but there's a piece of scotch tape sealing Zippy Zappy's pack.

This should be fun!  Let's break in! 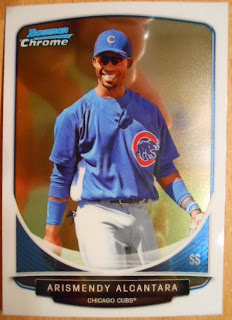 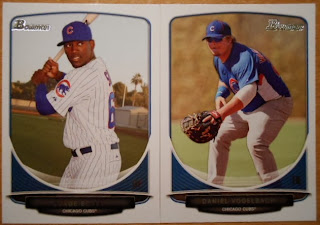 On the left we have Arismendy Alcantara from the LCS pack, while Jorge Soler and Dan Vogelbach represent the ZZ pack.

Let me be honest with you on this one.  I ripped into the LCS pack at the first stop light I hit yesterday on the way home and got so excited over the Alcantara card that I went into celebration mode, in the car, and laid on the horn.  Yep, for a brief moment in time I was "that guy".  And because the light was still red I'm sure I was on the receiving end of more than a few dirty looks.  Oh well.

Zapster, it was a great try, but the LCS pack and the "new to me" Alcantara win this round.

Tyler Pike of the Seattle Mariners is pitted against a '94 Classic card of Doug Glanville playing for the Orlando Cubs?  I have a mini Glanville collection (cards in Cubs gear only), which now stands at 8 cards. 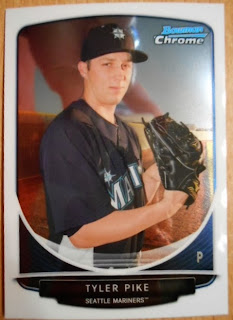 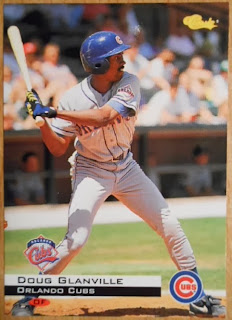 Tyler Pike who?  The ZippyZappy Pack fights back! 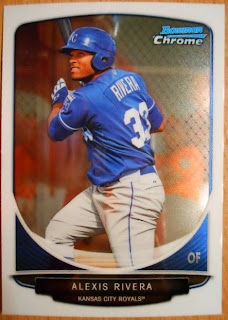 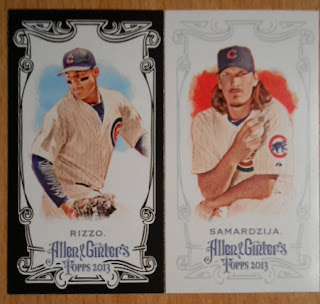 Alexis Rivera versus the tag team of a black mini of Anthony Rizzo and a regular Jeff Samardzija mini.    Miiiiiinnnnnniiiiis!

Seriously?  Another prospect I've never heard of versus two members of the Cubs' "core"?  This is resulting in some of the easiest scoring I've ever encountered.

The LCS factory sealed pack is down one and only has one more bullet in the chamber.  Let's see who's batting cleanup for each of the respective packs:  Round 4! 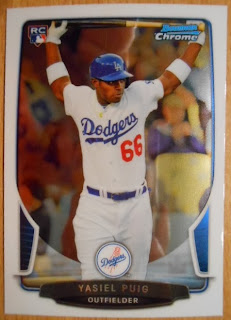 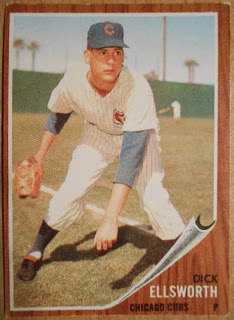 Wait, what?  My first card of Yasiel Puig versus a 1962 Topps card of Dick Ellsworth?  Until this point Danny Murphy was my only Cub from this 51 year old set.  Wow!

... it's Puig versus vintage...  It's a good thing I don't use a computer algorithm to handle the scoring, because this match-up would have fried a few chips.

I'm going with Puig.  Why? Because tie breakers are fun!

After 4 Rounds the score is:

Welcome to the tie-breaker round! 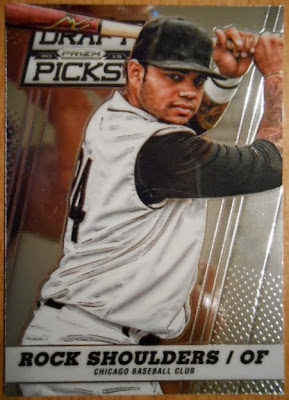 Yep, you only get one card, and it's from the Zippy Zappy Pack.  Of the two packs, this one is by far my favorite.  ROCK. SHOULDERS.
He's all tatted up and his name is ROCK SHOULDERS.  He's one of my favorite Cubs prospects and although his birth name is Roderick, he goes by ROCK SHOULDERS.

It's too bad Bowman only puts four cards in a pack, because the Zippy Zappy Pack holding back its best for last.

Feel free to let me have it in the comments section if you disagree with the scoring.