Any interest in some 1986 O-Pee-Chee Tattoos?

I have a few PWEs and a yellow bubble mailer sitting on my desk I need to open AND about 400 cards of junk wax that arrived last week that I haven't touched yet.  Man, am I getting back up.

Let's clear some stuff from the desk so I can get to some of the aforementioned goodness before the new year.

An orange 2012 Chrome Topps card of the newest member of the Chicago Cubs: Tsuyoshi Wada.  I thought only players who have made their MLB received the "RC" logo?  Wada, who was signed before the 2012 season by the Orioles, has yet to make his debut, because he got derailed with an elbow injury. 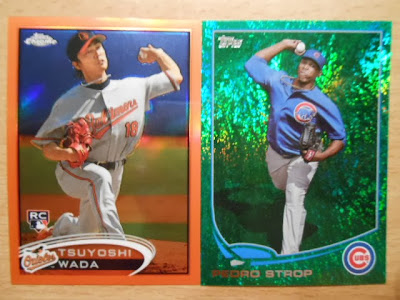 On the right is an emerald parallel of my current favorite bullpen arm: Pedro Strop.  I have a thing for players named Pedro.  Don't judge.  Pedro Martinez... Pedro Cerrano...  Again, don't judge.

The card of Pedro, and the two below were cards I purchased at my LCS.  My Albert Almora mini collection now spills onto three different pages.  Nice. 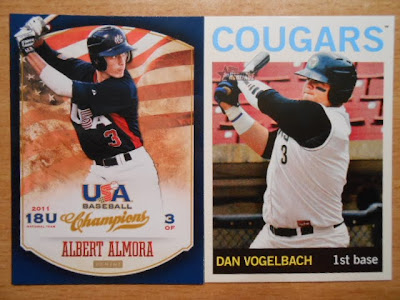 On to the Listia wins: 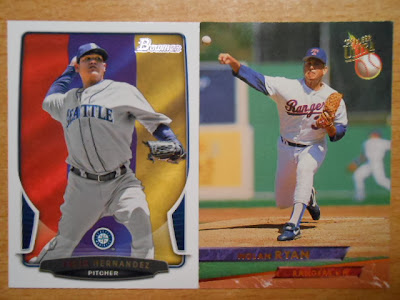 The King Felix will find a place in my 2013 Bowman FrankenSet.  I already had a gold parallel of Felix, but this International parallel is a nice "free" upgrade.  On the right is a sweet '93 Fleer Ultra card of Nolan Ryan.  I'm just picturing him blowing some cheese past some rookie half his age.  Good times.

Ian Kinsler has been a mainstay on fantasy baseball team for the last four seasons.  I needed this rookie card.  I like the way Kins plays the game and the way he wears his socks. 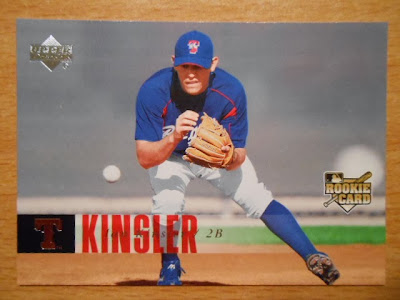 Speaking of rookies?  Here's a shot of Manny Ramirez ('92 Upper Deck), being himself, you know, before he was "Manny". 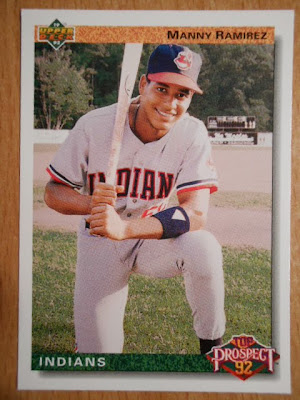 Another new card to add  to my Kerry Wood collection.  Free?  Thank you. 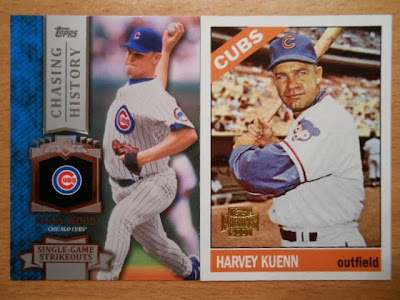 The Harvey Kuenn is a 2001 Topps Archives reprint.  A nice addition to my collection as well.

I believe the two above cards and all the rest below arrived from the same Listia seller.  I'm not really attached to much of what you'll find below, so if you find something that catches your eye just let me know.

These are some 1986 O-Pee-Chee tattoo sheets.  I'll be holding onto the Dunston, thank you very much.  Shawon was one of my favorites when I first started collecting. 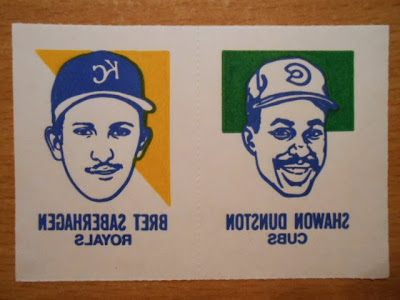 Again, any of these can be had: 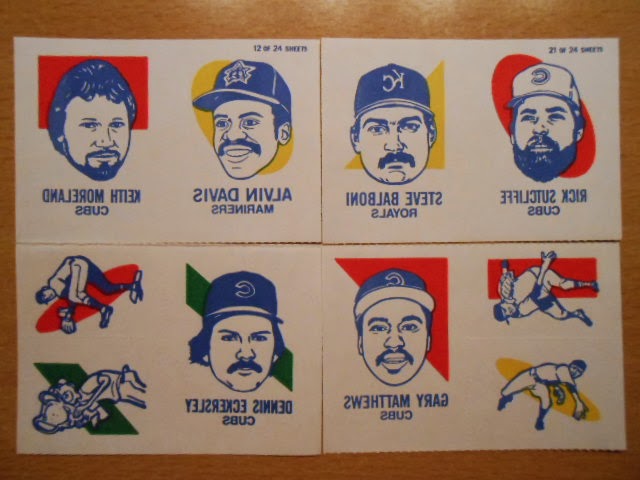 Lastly, I have a rub-on that sports the likes of Kent Tekulve, Ron Cey, Greg Luzinski, and Steve Kemp.  Any interest?  GCRL maybe?  Cey is in a Cubs uniform, so maybe not? 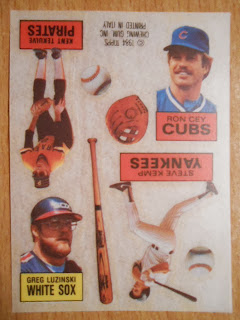 I don't know who Steve Kemp is, but Cey was given his nickname because he moved like a penguin, Luzinksi looked more like an offensive guard than a baseball player, and Tekulve had one of the strangest/best deliveries in my opinion.  What a collection of ballplayers!