Putting the Kraken to Rest

Wes, from Jaybarkerfan's Junk, has certainly given me plenty to write about.  It all started with a USPS flat rate box that landed on my door step.

Then there was Box #1, the Box #2 confusion, which was followed by a calming container of team sets from the '80s in Box #3.

It's been quite a ride and slaying this Kraken composed of cardboard was no easy task.  Although the Kraken did not capsize me and my tiny vessel, I'm afraid that my ship has become swamped with cards from the battle that was waged.

Translation: Box #4 was over the top.  The picture at the top of the post is my attempt to sort the cards into commons stacks.  Midway through sorting I realized that I was caught in a hurricane of randomness and the result is a rather formidable stack at the middle, far right.

Let's start things off with a couple of Cubs pitchers that I collect, Brooks Kieschnick and Matt Clement.  I can still hear Harry Caray trying get Kieschnick's name out. 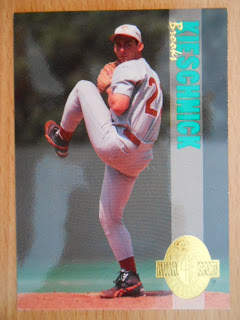 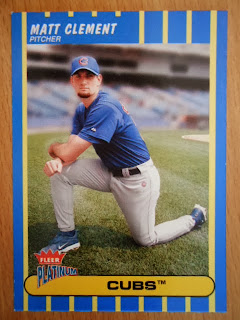 More players that I collect: The Hawk and Fergie.  I'm thinking that is Fergie's Feller "sunset" card.  Both are new to my collection! 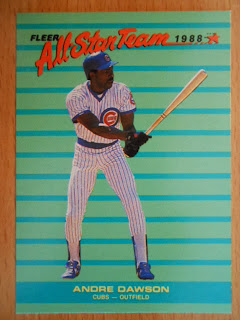 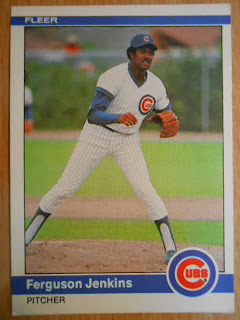 Vintage?  Heck yeah. A 1969 Topps Rich Nye card that looks to have had a run-in with Morganna the Kissing Bandit. I think Nye pitched for the Cubs before Morganna's time, but what else besides lipstick could be at the top of the card? 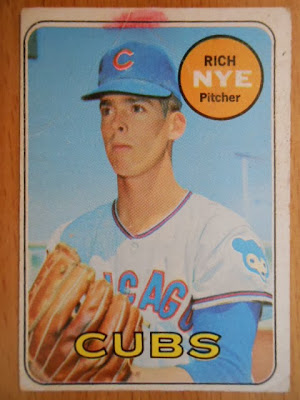 Up next we have a pair of 1981 Bill Buckner cards.  The base set issue is on the left and the Coca-Cola parallel is on the right.  I didn't know there were parallels back in the day! 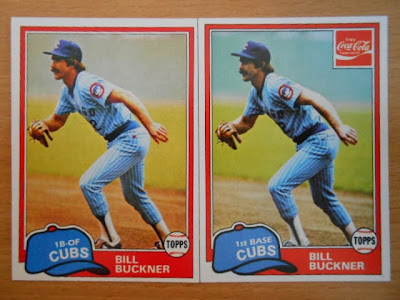 Here's a couple of cards of fellows who I definitely would have been a fan of in the early '80s.  Dave Kingman was supposedly some kind of strong, and Leon Durham was one of the catalysts to the '84 team's offense.  Man, I love those powder blue pin-striped uniforms! 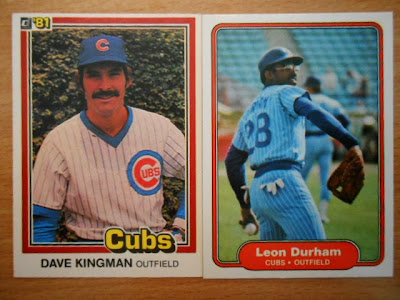 Play collection help!  Even though I now have 692 different Sandberg cards, Wes always has a knack of finding ones that fill gaps in my player collection. 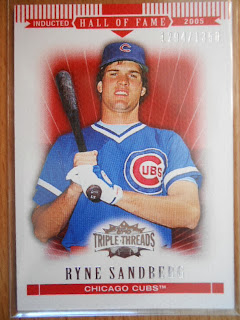 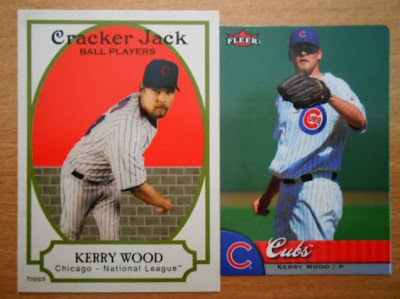 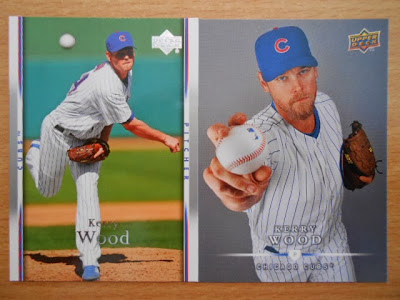 I could have shown more Kerry Wood, but I didn't want to bore you.  You only had to make it through my four favorite from the Kraken.

Hey, and we can't forget Kosuke Fukudome!  I'm now up to 89 different cards. 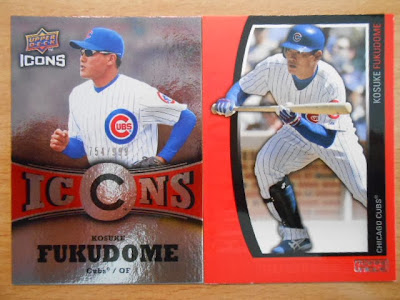 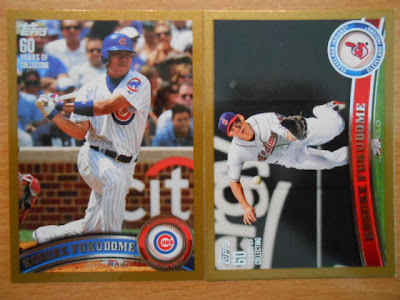 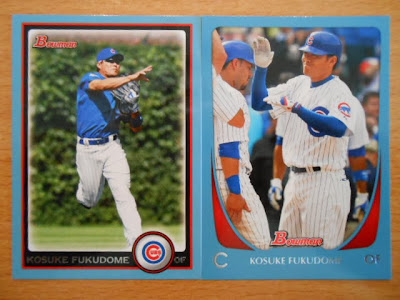 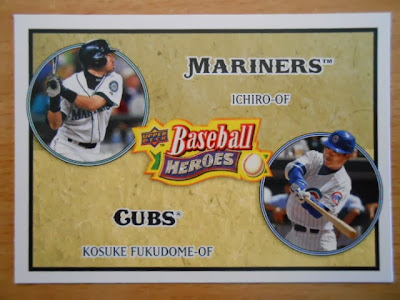 I just learned about this Upper Deck card with Ichiro when I doing some window shopping on eBay the other day.  So awesome that it among the contents of Box #4!

How about players whose shelf life in a Cubs uniform may expire before too long? 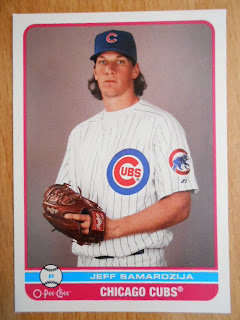 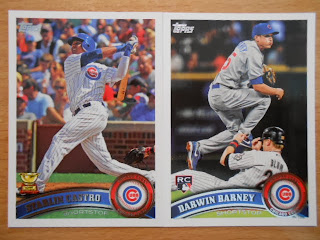 It wasn't so long ago that our middle infield was looking like it was set for the next decade.  But Barney and Castro both had down years in 2013 and the kids on the farm will soon be knocking on the door.   And Samardzija?  The rumors are cranking up and he's apparently a highly sought after commodity.

Sammy doesn't get a lot of love from this blogger, but I will say that I always appreciated his hustle. 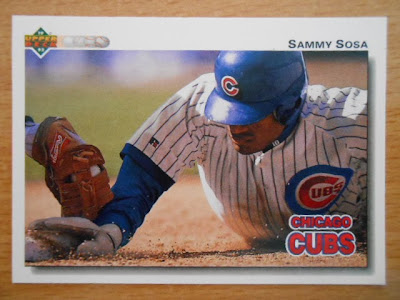 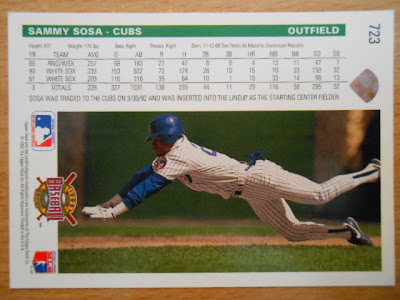 I like the back of the card and how the front of the card "kind of" completes the story of his steal attempt.  Out?  Safe?  I don't know, but I do love the hustle captured with each shot!

Here's a couple of '88 Donruss Maddux cards that are both new to me.  Nice. 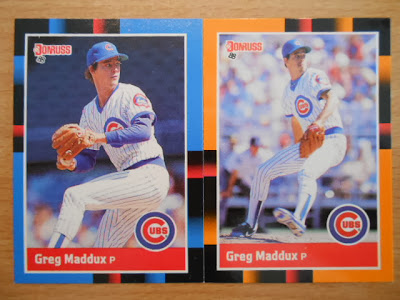 Also included were cards of two of my personal favorites in Hector Villanueva and Jovan Rosa.  Pudgy part-time catchers are hard not to root for (see Dioner Navarro, 2013), and Rosa was a fan favorite when he played in Peoria. 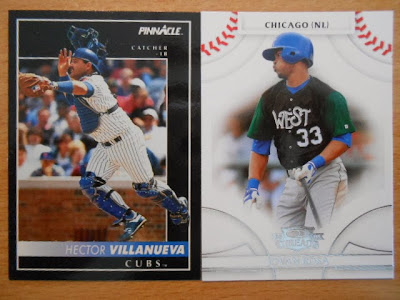 Speaking of fan favorites!  Reed Johnson!  He has some great cardboard out there with him leaping and another with him chasing down a fly ball through the seagulls, but I think this is my favorite. 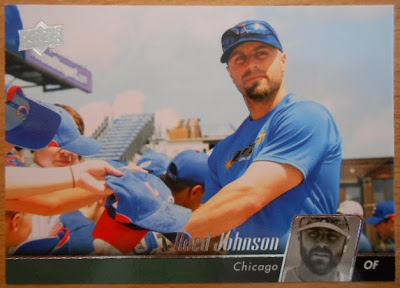 These two guys were HOT back in the summer of '89 and I remember the '89 Topps Traded set selling for over $30 in my area at the time it was released.  Finally, I have the 1989 ROY and the runner-up in my collection. 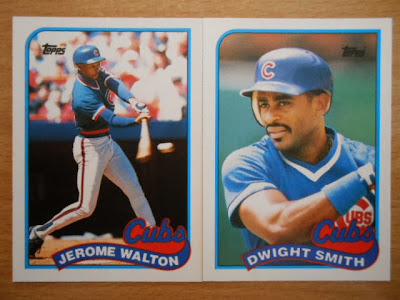 I just learned about these Renata Galasso cards.  Lots of them are affordable on "the Bay" and it may make for some fun set collecting down the road.  But for now, I'm happy to have my first from the set in Jolly Cholly. 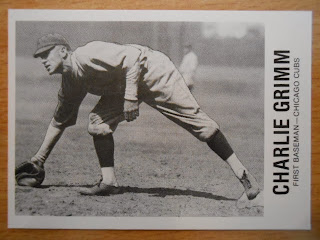 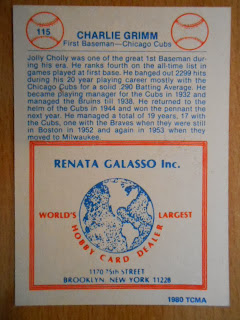 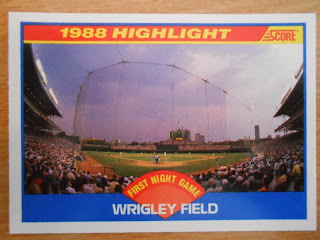 Last, but not least, is one of my favorite pieces of cardboard from the junk wax era: the '89 Score Highlight card of Wrigley Field's first night game. Daniel, from It's like having my own Card Shop, has a pretty neat project going with this card. You should check it out.

Wes, you certainly have outdone yourself this time around!  Thank you for your generosity: one man's junk is certainly another man's treasure!
Posted by P-town Tom at 12/08/2013 07:13:00 AM