A Swapping of Woods

I recently contacted Jon, from Community Gum, about making a trade.  We're both fans of the Chicago Cubs and sometimes trading with a fellow fan can be difficult.  In this case it was pretty easy, because we were both pulling cards from our duplicate piles!  Oh, and let me reiterate my love for blue tape in trade packages.  Well done, Jon! 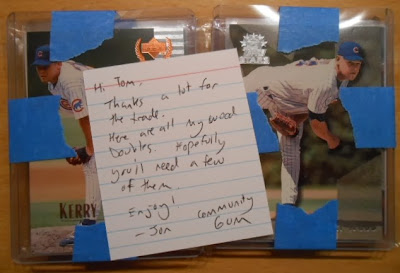 I sent some Ryan Dempster, Greg Maddux, and Starlin Castro cards his way along with some Kerry Wood duplicates, and he returned the favor with a nice stack of Kerry Wood cards for my player collection.  In all, there were fourteen that we new to me and now my Wood player collection stands at 285 unique cards. 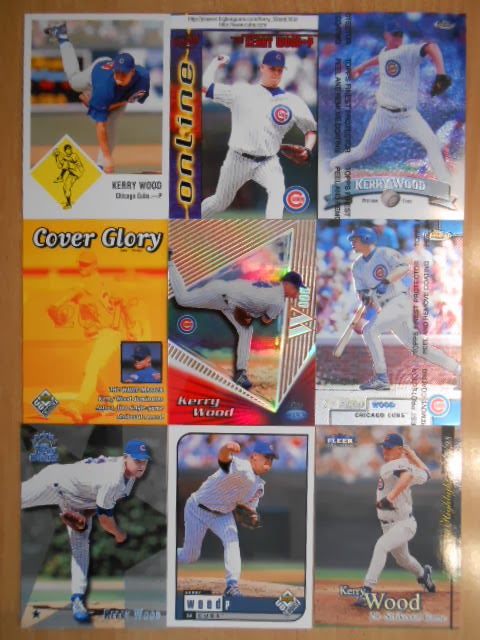 My favorite thing about collecting Kerry's earlier cards is it frequently exposes me to sets that I didn't know existed.  Above is a nice smattering of variation of Kerry Wood cards that are all new to me. 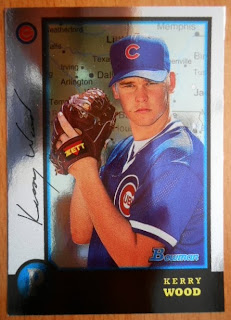 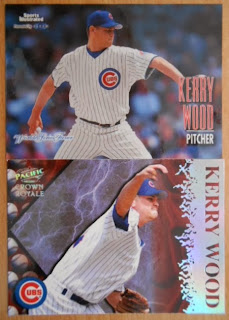 I've been after one of the chrome international parallels of Kerry for awhile, so this was a pleasant surprise to find in the trade package.  I really like the Sports Illustrated card on the top right.  Sometimes simple is better.  On the other hand, the Pacific Crown Royale is one of the "uglier" cards I have seen in a while.  Way too much going on there in my opinion.

Pacific redeemed itself with this pretty cool looking die-cut card of Kid K.  I'm not sure I would have placed his glove behind the crown, but I do like the overall concept. 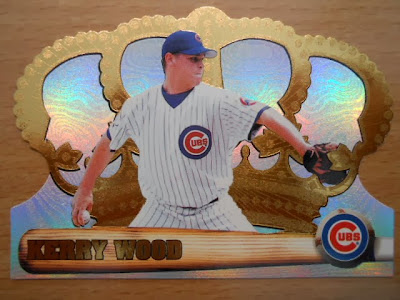 Here's my favorite card from the bunch.  This 1999 Pacific Omega card captures the scene after Kerry recorded the last out of his 20 strikeout game during his fifth major league start.  Mark Grace and Sandy Martinez both seem more aware of the historical significance of the achievement than Wood does in either photo. His facial expression on the left seems to say, "Really?  Another picture?" 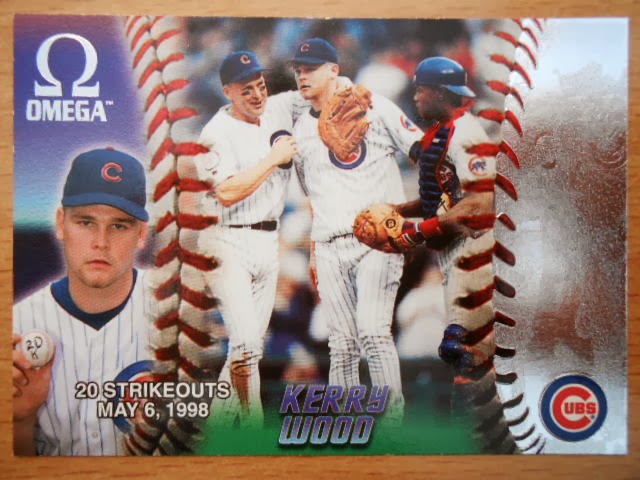 The silver foil on the right side of the card did not photo well.  It's a foil etching of the same picture in the middle of the card.  If you look closely you can make out the Cubs patches on the jerseys.  Personally, I would have liked to have seen a picture of a scorecard from the day and all of those K's next to the Astros' lineup.  Someone should consider hiring me as a baseball card consultant!  Ha!