I've reached Box #3 and each box is larger than the previous.  I think this one was a 400 count box and its contents were exclusively Cubs, except for a surprise at the end.  Wes, the biggest Jay Barker fan I know, certainly likes unloading his junk (Cubs) on me!  And I'm a happy recipient!

Someday, maybe someday, I'll come up with a Cubs team set want list and get after it, but until then I'm happy to just randomly accumulate my boyhood idols.

I was too young to remember the Cubs teams from the early 80's, but here we have a half-dozen '84 Topps, nine cards from the '90 Score set, and another six of '89 Fleer.  The Dream Team Sandberg in the middle is one of my all-time favorite cards of Ryno and the mustache on Goose is killer. 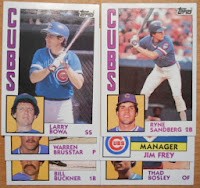 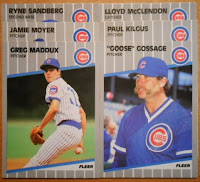 1988 Topps?  Normally, that would be accompanied by a deep yawn, but these are from the Traded Set!  Along with the the Mark Grace rookie that I have in a top loader I think these five will complete the '88 Topps Traded Cubs team set.  Score!

Joining the samplings of cards above there were large stacks or Cubs cards from 1980, 1981, 1985, and 1986.  It's probably close, but I there's a team set of each year within the stacks along with a couple of duplicates. 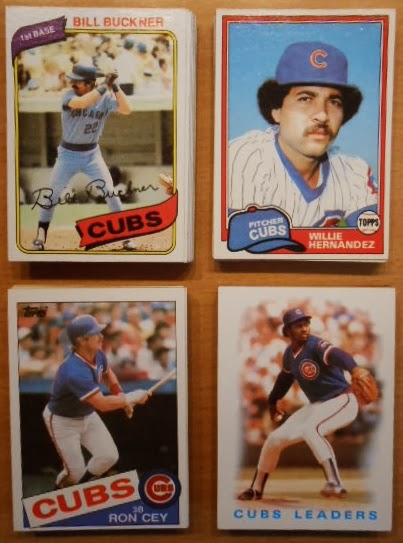 I didn't start collecting the summer of '88, so these Cubs cards will all find a nice home in my collection.

Speaking of cards that were manufactured before I started collecting... 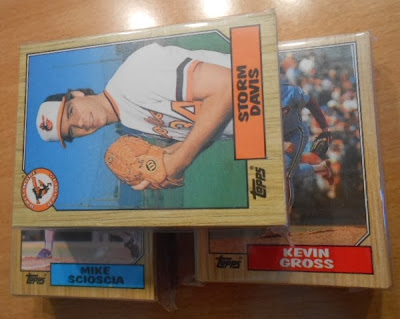 Yep, three large team bags of '87 Topps.  And, for those of you keeping track at home, that's two posts in a row featuring the wood-grained bordered cardboard from Topps.  If this keeps up, one of my New Year's resolutions for 2014 will definitely be easier to accomplish that I originally thought.

Well, that does it for Box #3, stay tuned though because I've already sneaked a peak at the last box and it's a doozy!