It's time for another edition of Pack Wars!  This time around we have 2013 Panini Draft Picks (6 cards) versus 2013 Boman Draft Picks & Prospects (7 cards). 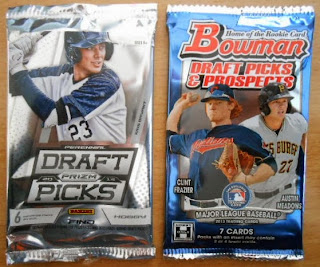 Reminder to those of you at home, scoring in Pack Wars is done completely off the cuff and will not be subject to further review.  Although, boisterous opinions and heckling are both encouraged in the comments section!

Panini is off to a fast start with Carlos Correa, the #1 overall pick in the 2012 draft. 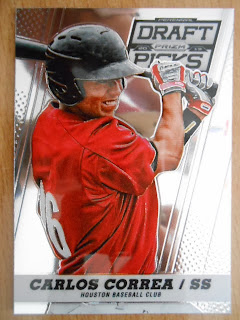 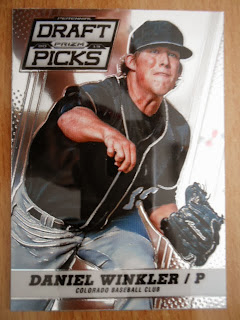 Panini rebounds nicely though with an Austin Wilson HOT PACK!  Wilson was the 2013 2nd round pick of the Mariner. 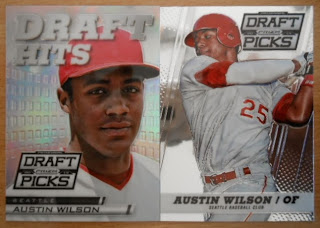 The last two cards feature Jorge Alfaro of the Rangers and Alen Hanson of the Pirates, neither of whom were drafted!  Yep, that's right, they were both signed as UNdrafted free agents. 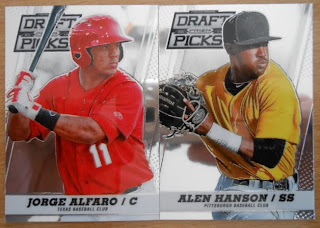 Scoring: -5.  Again, this product is called "Draft Picks", yet it features players who were never drafted?  Am I missing something here?

2013 Bowman Draft Picks & Prospects has a one card advantage going into the contest.  Can they use the extra card and parlay it into a victory?  Let's see!

1st card - John Costa of the Washington Nationals.  Costa was a 13th round pick in this year's draft. 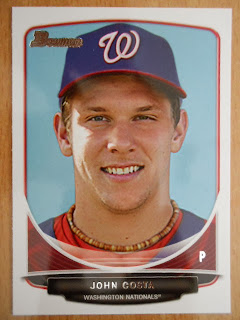 Scoring: +2, because the back of the card states that John "enjoys beach activities".

Card #2 - Thomas Milone of the Rays, drafted in 3rd round of 2013 draft
Scoring: -1.  How can a baseball card, which has room for a stat line, have no stats on it.  Someone is not using technology to it's fullest.  No stats for me, no picture of the card for you.  Fair is fair. 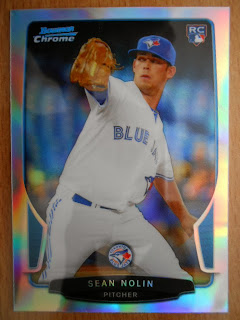 Scoring: +2, for being a chrome refractor AND +5 for being a prospect that I read about earlier this month as a possible trade piece in a Jeff Samardzija trade. 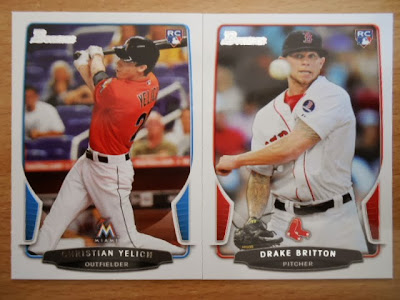 Scoring: +1 for Yelich's sweet orange jersey and +3 for Britton's tats.

Card #7 - Nick Castellanos, Tigers, former 3rd base prospect, turned outfielder, turned back to third base. The departure of Prince, along with Miggy sliding across the diamond, should put Castellanos at the hot corner.  Right? 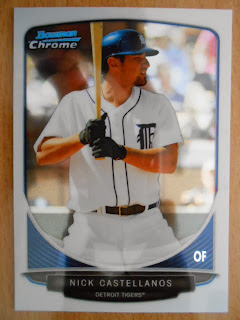 Scoring: +2 for being a chrome card of guy that I know in a draft pick and prospect set.

Wait, there's a penalty on the play!  The base set of 2013 Bowman Draft Picks and Prospects, which gives 130 draft picks from 2013 their own card, doesn't feature one Chicago Cub!  The closest thing is an insert card that Kris Bryant (Cubs #1 pick) has to share with Colin Moran (Marlins #1 pick). 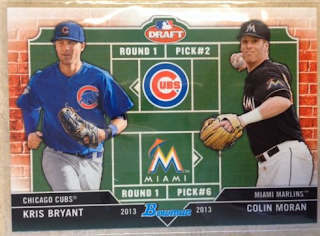 Seriously? 130 cards and not one Cub? What's up with that?
Penalty = -10.  You have to play to your judge, and obviously Bowman/Topps did not.

The penalty may seem a bit harsh and it cost Bowman the win.  But this situation reminds me of the initial Bowman release of the year when 15 Yankees were given a card in a 110 card prospect set.  No, I'm not exaggerating, 15 out of 110.

It's a matter of quality control, attention to detail, and effort if you ask me.  Shame on you Bowman/Topps.