Yesterday the remnants of Hurricane Isaac visited my residence and we accumulated a little over 1.25 inches of rain in a twenty-four hour window.  That may not sound like much, but it was more than we had seen in a good long time.  My junior high softball tournament was cancelled, and this coach was kept up indoors for most of the day.

I eventually went out to my local card shop (LCS), Baseball Card City, and I managed to spend less than $10 during my visit, which is a moral victory of sorts.

I've fallen into a pattern of buying a handful or less of 2012 Topps Opening Day packs and usually a couple of Cubs cards.  Here's the Cubs that I found that piqued my interest.


I have the base card of this 2012 Reed Johnson, but the sparkly gold parallel is really well done.  Even though Reed was traded to Atlanta he is still one of my favorites. Everything is shiny/sparkly except Reed and those crazy seagulls that always seem to migrate to Wrigley Field about 4:00 during a day game.  Look how the ivy is rainbow-esque.  Nice job, Topps. 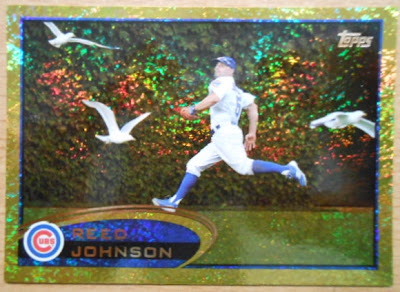 My other Cubs purchase was a card featuring three prospects within the farm system.  I've been following all three.  Dillon Maples pitched for Mesa in the rookie league this summer and Matt Szczur was promoted to AA for the second half of the season.  Dan Vogelbach, who I was really hoping to see play in Peoria next summer, started in Mesa and was promoted to Boise.  I've taken to calling him "Vogelbomb" because of the long homers that he launches.  I guess he hit the team bus parked beyond the right field wall last week.  Man! 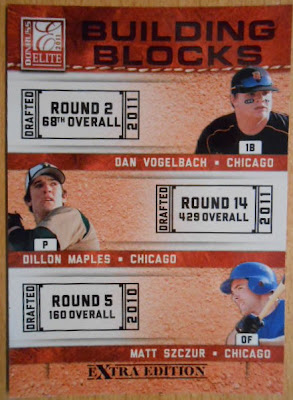 So, I left my LCS with five packs of Opening Day and I think I've now reached the point where I need to stop buying packs, put a checklist together, and finish this set.  Here's a base card and 3D insert of Roy Halladay to give you an idea of what the cards look.  Both Halladays were found in the same pack with Jimmy Rollins.  Three out of seven cards were Phillies!  A Phillies Hot Pack!  (This was a sign of things to come.) 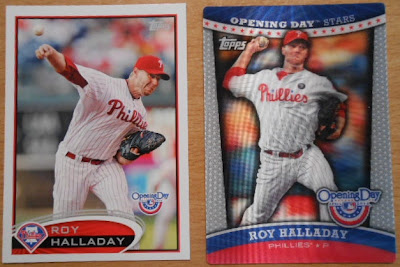 I love the Opening day cards, because they're much like Topps' flagship product, but at a fraction of the price.  I'm not really big on trying to rip packs to find the 'hit' or another card that captures my interest.  Opening Day doesn't boast the promise of 'hits' and I think that's how they keep the price down.  Heck, if there's something out there that I want to try to get, I've found it's much more economical for me to just purchase a good deal on eBay rather than try my luck at getting it in a pack.

I stopped by Target on my way home and picked up a pack of Panini Triple Play.  Again, seven cards for a dollar, just like the Opening Day packs!  It felt kind of weird checking out with one pack of cards when everyone else had their carts stuffed with groceries and clothes.  I had my reasons: I wanted to get back to the car before the skies opened up again.  Nope, didn't happen.  Oh, Isaac.

Here's a sample of a base card and a sticker card I had in the pack.  I really like the Chipper Jones and follow him on Twitter, @RealCJ10.  He only tweets a couple times each day and uses fun words like "mammo" and "yicketty".  Both are slang for a homerun, although I think "mammo" homers are hit farther and "yickettys." 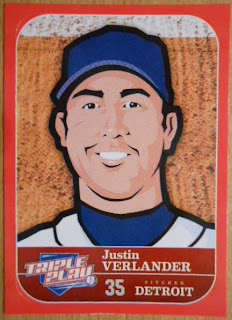 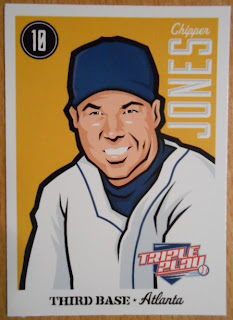 I really like the style of the Panini cards.  Very different and the price is right.  I think the blogosphere is taking notice as well.

Also in the pack was this Roy Halladay.  It's one of the nine puzzle pieces that make up the 9-piece puzzle of the card on the side pictured below.  The reverse side is the puzzle piece. 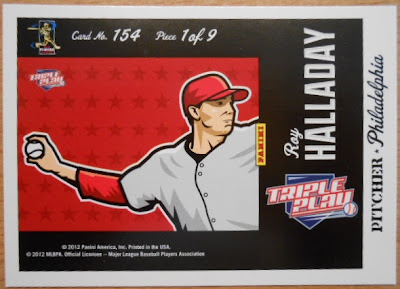 Lastly, I had a package waiting in the mailbox for me.  It was supposed to be a blue bordered 2012 Bowman card of Cubs prospect Dillon Maples.  I'm trying to collect the rainbow of Maples, which I will post when I get as many as the fiscally responsible me can obtain.

This card was not Dillon Maples!  The eBay seller said that I could keep it free of charge and he would send out the Maples card ASAP.  That was nice of them, but what am I going to with ANOTHER Roy Halladay?  Yikes!


I've heard of hot packs before, but what about a hot player day?  Five Opening Day packs, one pack of Panini, and one package in the mail yielded four different Halladays?  Sheesh!  Too bad it wasn't Anthony Rizzo or Tony Campana.  Any Phillies fans out there want to trade? 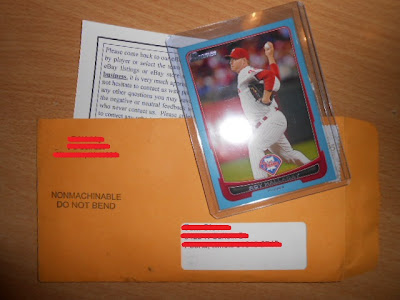