In the 4+ years that Laura and I have lived in our neighborhood, we've discovered that we have been blessed with a Magic Curb.  Large objects, which may or may not have disappeared at our previous residence, disappear with regularity now. 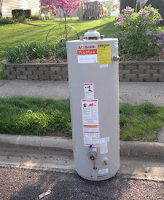 We decided to test the curb's magical powers with my friend's father's old water heater this past spring.  Yep.  The curb is very powerful indeed!

Our latest update/remodel job involved the side entrance to the garage. The door's only locking mechanism was a push button on the doorknob.  We wanted a dead bolt, but the old metal door, which was more-or-less hollow, wouldn't securely hold a new dead bolt.

My grandfather and I installed a new door and dead bolt in the original frame with the old push button doorknob.  It took a couple of hours, but it looks great and I learned a few things.  Grandpa brought over his chisel set, that his father had given to him, and he taught me how to use the set to properly move the door's hinges on the old frame.  I'm sure my dad used the chisels at some point, and to imagine that I was the fourth generation to use the set was pretty neat.  Thanks for the lesson and help, Grandpa!

Okay, back to the magic curb.

I placed the old metal door in the new frame and took the pair to the curb at 6:20 p.m. last Monday.  I awoke and checked the curb twelve hours later.  Hmmm.  Not enough metal on the door frame perhaps?  No worries, the garbage men tossed the lightweight frame into the back of the garbage truck later that same afternoon.


Hmmmmm.
What
to
test
next?