Being a fan Vs. Fantasy Sports

Let me start off saying this: being a fan and playing fantasy sports can cause a bunch of headaches.

I have learned over the years to separate the heart from matters of fantasy sports, but sometimes that's easier said than done.  In my two fantasy baseball leagues this year I only had one Cub, and I only rostered him until a week after the All-Star break and then cut ties with him.  Tough for a homer to do, but Bryan Lahair wasn't playing much and rumors were flying that Anthony Rizzo was to be soon called up. In all, it ended up being the right decision.

I'm a baseball-first kind of guy, and football to me is just something that helps to pass the time until spring.  But, I do love my Bears.  Monsters of the Midway! The Bears take on those crazy Packers tonight.

Again, I tried  to steer clear of the Bears in my two leagues, much like I did with my baseball leagues, but Brandon Marshall fell to me in one league and Matt Forte in the other.

My heart and head both say, "Start Marshall!"  The aerial attack should be out in full force in this gunslinger showdown.

Matt Forte?  Forte is one of the top backs in league, but he's only scored one touchdown in his history against the Packers.  Yet, he's an awesome pass catcher out of the backfield, but Cutler has a REAL target in Marshall.  Forte can bust of chunks of yardage at anytime, but Michael Bush will vulture all of his goal line touchdowns.  As you can see, I'm on the proverbial fence with my decision on sitting or starting Forte. 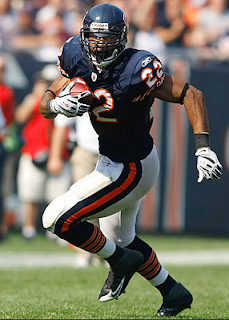 Here were my options, which are never good when fantasy sports and "fandom" intersect:

A) Start Forte.  Surely, this would result in minimal fantasy points.  If Forte doesn't have a good fantasy day, then the odds of the Bears winning are slim at best.

B) Sit Forte.  Murphy's Law says that this would result in oodles of points!   This would be better for the Bears chances, but I would be sore from kicking myself for missing out on the fantasy points.

Yeah, he's on my bench.  What's a guy to do?  My hands were tied.   If you think I should look at my other running backs before making this decision, then you're not picking up what I'm laying down. It's one of those darned if I do, darned if I don't scenarios.

I'm a fan first, fantasy is just for fun.  I choose option "B"!  Bear down, Chicago Bears!