Not too long along I posted that I was going to try to complete the 2012 Opening Day set.  Adam, of ARPsmith's Sportscard Obsession, contacted me about making a trade.   I sent over a handful of inserts for the same set and couple of San Francisco Giants for team needs.

For the record, this was my tenth different blogger that I have completed a trade within the baseball card blogosphere. I know some bloggers can knock that out in a week, but ten in a summer is a pretty good pace for me and my card collecting goals.

Below are my favorites from Adam's package.

First up, Brandon McCarthy.  He was just released last week from the hospital after being hit in the head by a line drive and he is back to being his old self on Twitter.  Mr. McCarthy is a humorous follow: @BMcCarthy32 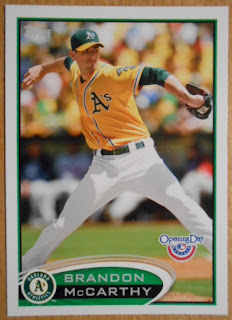 Mascot cards!  I know they have been done recently with Topps Attax and other Opening Day sets, but I like them nonetheless!

Thanks for a fun trade, Adam!