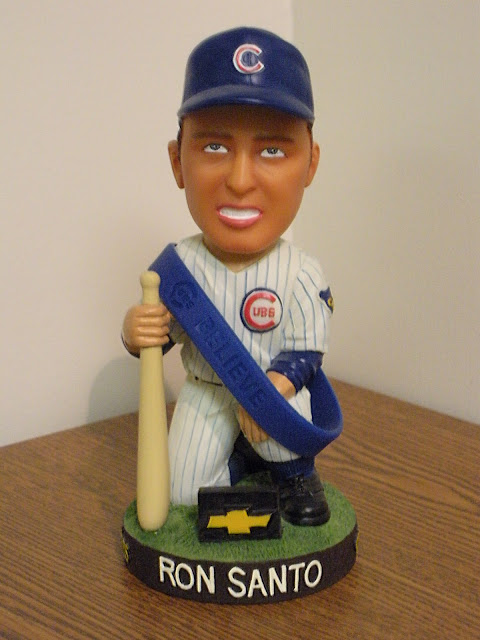 Bobblehead #2
Name: Ron Santo
Position: Third base
Team: Chicago Cubs
Description:  6.75 inches tall; taking a knee with bat in hand. I've added a Cubs "Believe" bracelet to Santo.
Relevance: I don’t know that there was a bigger Cubs fan than Ron Santo.  He was a must for my collection.
How Acquired: Another eBay transaction!
Other Notes: Although I never saw him play, I know Ron Santo was a heckuva ballplayer.  He earned many awards and accolades during his career, a career he played while battling diabetes.  Ron was posthumously enshrined in Cooperstown this summer. It’s too bad he wasn’t around to enjoy the moment.
Santo was a terrific person and did much charity work for the Juvenile Diabetes Research Foundation.  He also was a champion educator for diabetes and the documentary, This Old Cub, certainly opened my eyes.  Pat Hughes, his radio partner, would often speak of how Ron would reach out to fans that were just diagnosed with diabetes or were struggling with the disease.
He was an adequate color man on the radio. The best part of Ron being on the radio was that he celebrated when you cheered and he bellowed out “Oh, No!” when you couldn’t bear to watch or listen.  He was a true fan of the Cubs, my Cubs, and he wasn’t afraid to let everyone know it.  As a loyal listener to WGN radio it was hard not to feel as though Ron was part of your own family.  And as silly as it sounds, I felt as though I grew closer to Ron with each passing summer.
Best of all: Ron wore his emotions, allegiances, and heart on his sleeve.  He bled blue.  Ron Santo will be missed.
Bonus Note: The below youtube video is an audio clip of a Cubs win.  Pat Hughes describes the play-by-play and you can hear Santo in the background.  Great stuff.