Okay, so I bought a pack of 2012 Panini Triple Play the other day.  Panini is targeting the younger members of the card collecting market, and instead they have lured me in.

The pictures are some sort of computerized vector art, which I really like.  Behind the player a logo from the player's city is featured. For example, on-line I've seen Maple Leafs for the Blue Jays and Halos for the Angels. Pretty creative and very cool.

I showed a couple of cards the other day, but here's another card.  This time I give you Mat Latos of the Cincinnati Reds. 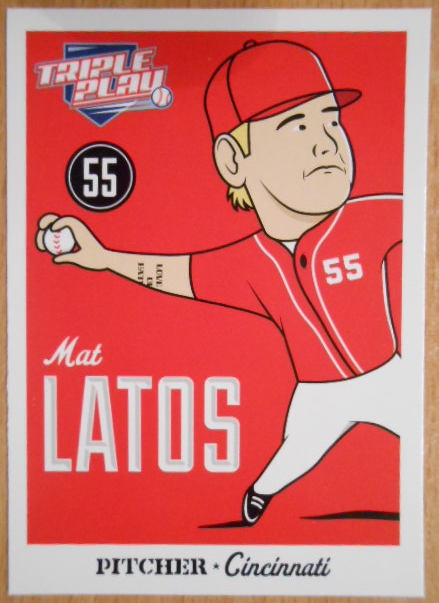 First, the background of Latos' card does not feature anything.  It's just plain red. No logo to be tiled in the background?  Maybe they just went with red because he plays for the Reds?  Hmmm.  I may have to buy more packs to see if there is a pattern here.

Second, check out the right arm of Latos.  There's print there!  A computerized vector art tattoo perhaps?  Latos is known for having a pretty random collection of tattoos.  Below is one of the first pictures that popped up from a google search. 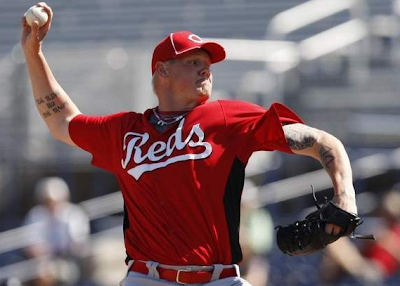 That's an amazingly clear photo of an arm capable of producing 95 mph fastballs, but it's still pretty tough to read.

I did a little investigating, and Latos's tattoo reads, "Love me or Hate me."  Looking back up at the card, I can see that Panini did their research.