The Quest to Avoid 100 Losses.

The Cubs recently traveled to Pittsburgh and may have put the final nail in the coffin of the Pirates 2012 season by sweeping a three game set at PNC park.  The Pirates are now behind two other teams for the second wild card spot in the NL.  When you get swept at home by the 2012 version of the Cubs things are not looking up.

Spoilers.  I enjoy the role of spoiler. Laying down for my opponent was never my thing, and I hope these young Cubs are similar in their beliefs.

The Cubs only have twenty-one games left in their season, and there are a handful of things that I'm keeping my eye on as they play out the string: 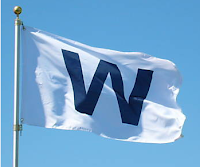 1. Can they avoid 100 losses?  Right now they are projected to finish with 63 wins and 99 losses, and that's largely due to the mini four game winning streak they currently are enjoying.
2. Can Alfonso Soriano hit 30 homers and log 100 RBI's?  If he launches two more home runs, then it'll be the first time since his inaugural season in Chicago, back in 2007, that he's hit 30.  He has never hit 100 RBI's with the Cubs, and he's already surpassed his previous best of 88 with this season's 94.
3. Tony Campana.  I love the speed, but wish his on base skills were better.  Unfortunately, I think his days with the Cubs are numbered.  For example, Jackson is injured and DeJesus got the night off last evening.  Who roamed the outfield with Soriano?  None other than Joe Mather and David Sappelt.  Bummer.  That puts Campana 6th on the depth chart for one night at least.
4. Darwin Barney's errorless streak.  He plays the game hard and fields his position well.  Much respect.  Carry on.
5. Chris Rusin.  Part of me wants to believe that he is our solid lefty starter for the next 5 to 10 seasons.  The other parts wish he could locate his fastball better and was the beneficiary of as wide a strike zone as Tom Glavine would often receive. Only time will tell if he's a legit MLB starter.