I, like CommishBob, received my 2020 Negro Leagues Legends 184 card set, produced by Dreams Fulfilled, yesterday in the mail. The Five Tool Collector details the set wonderfully, but I'll also take a crack at it.

I originally saw this set advertised on Twitter and I zipped right on over to NegroLeaguesHistory.com to pick up a copy. I've been to the Negro Leagues Baseball Museum in Kansas City a couple of times, and both times I looked for a Negro Leagues set. I am really pleased a true card set has been released recognizing the tremendous athletes who helped pave the way for baseball to be an inclusive sport.

When building my Hall of Fame binder, which contains one card of every Hall of Fame player, I truly struggled to track down a card for each ballplayer. Sometimes it was because the individual played in the 1800's, but more often than not it was of player who called the Negro Leagues home. I had to ask Gavin to help fill some of the holes by sending me a copy of his "Neglected Hall of Famers" custom set. For the record, Gavin's cards will stay in my HOF binder, because I'm also going to place this beautiful set into a binder as well.

Alright, let's show off the set! It's a boxed set, much like the Topps traded sets of the 1980's. 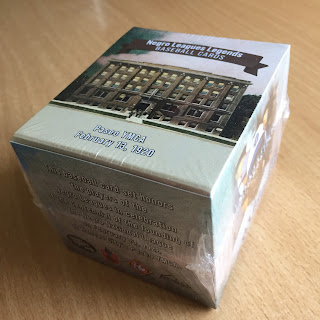 So much goodness crammed into one small little box. 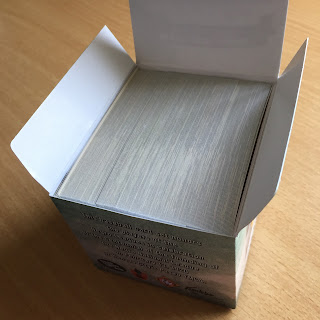 There were a couple of advertisements used to bookend the cards. I figured I would show this one if anyone is interested in picking up a set or other items. 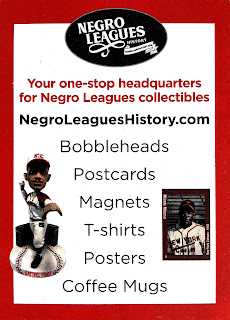 Here's an insert card giving a synopsis of how the card set came to be. 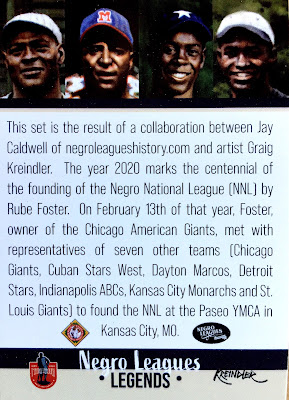 For the record, the first thing I noticed about the cards was the artwork of Graig Kreindler. He must have had access to some of the better photos of the era, because some of the cards in my HOF Binder barely allows one to make out the players' faces. 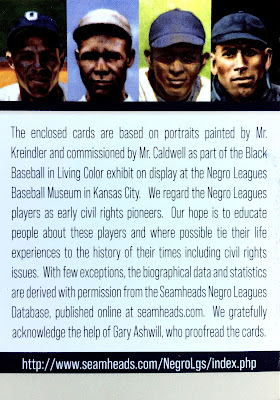 Kreindler is obviously a very accomplished artist, as you will soon see, and the detail of each picture is phenomenal, particularly the uniforms and landscapes behind the players.

The checklist for this set can be found on Beckett's website and you might notice some players are given multiple cards. As this set serves as a comprehensive history of the Negro Leagues I'm okay with multiple cards of certain players.

Buck O'Neil, for instance, has three cards in the set, although I only photographed two of them. 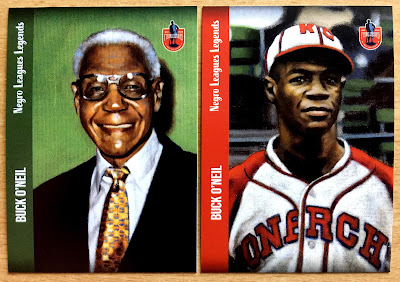 One of my more treasured bobbleheads is of Buck O'Neil, which I highlighted when I did my bobblehead countdown eight years ago, so he gets the honor of being the first cards shown in the post! 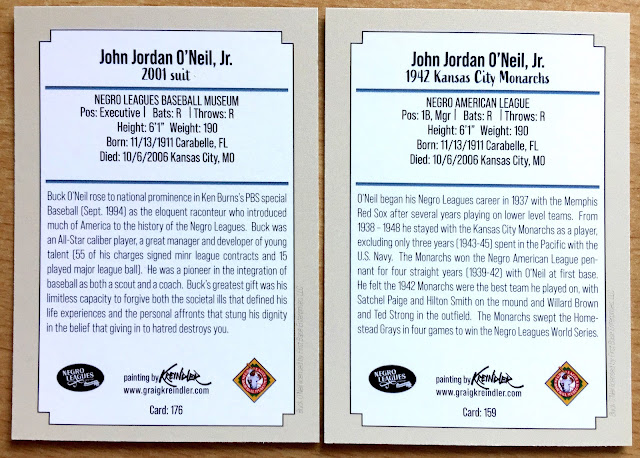 The backs of the cards have the typical biographical information at the top and the rest of the space is crammed with facts and stats. Statistical lines from the Negro Leagues are largely incomplete, so I think the biographical write-ups were an excellent way to go.

The design of the card is nothing special. In most cases, the left border is colored to match the uniform of the player. Position and team information is not given on the front, which lends itself to a certain simplicity while allowing the artwork to really shine. 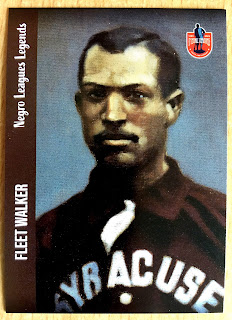 Just in case you needed reminding: Fleetwood Walker was the first African American to play in the Major Leagues. 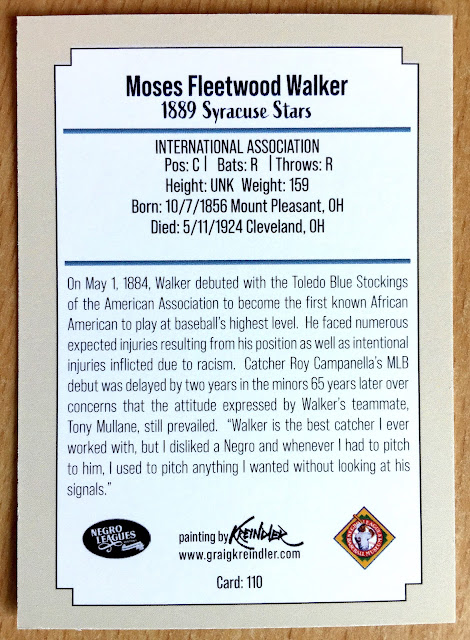 We're going to go picture heavy from here on out, so buckle in!

Here are cards of the Jackie Robinson (NL) and Larry Doby (AL), the two players most noted for breaking down the color barrier. 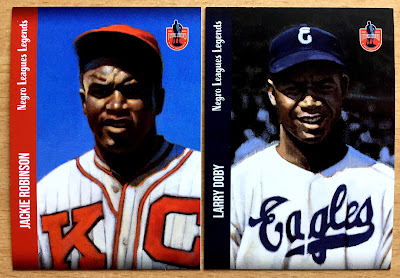 Look how young Hank Aaron is! 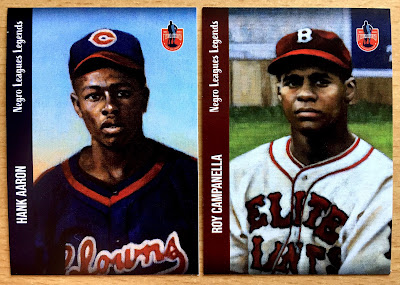 I didn't realize until reading CommishBob's post, but this is actually Luis Tiant, Sr.  His son is the player I'm familiar with, who played from 1964-1982. 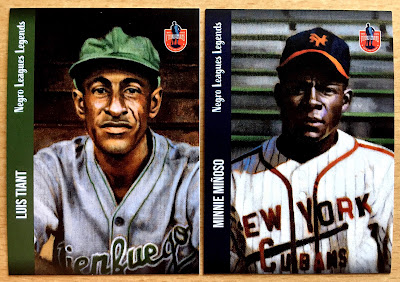 Elston Howard and Monte Irvin are couple of more names that stuck out to me. 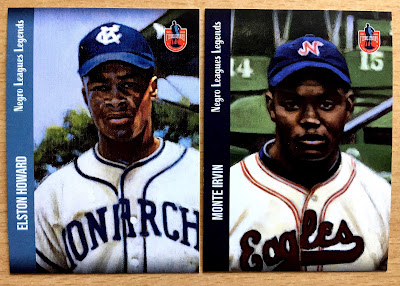 The old style chairs behind Monte Irvin might be my favorite backdrop of all the cards included.

Many of the players I showed above got their start in the Negro Leagues, but here are couple of the more notable stars who often get forgotten about: Cool Papa Bell and Buck Leonard. 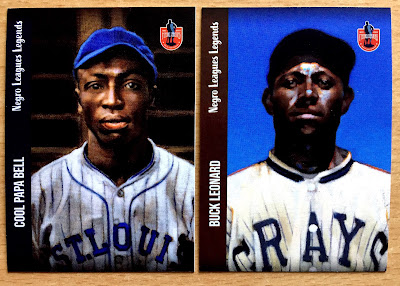 Just taking a cursory flip through the cards I was able to pull many players who have been enshrined in Cooperstown:

I may have missed a few!

I've only had set the out of the box for a couple of hours, but here are the early returns on my favorite two cards. 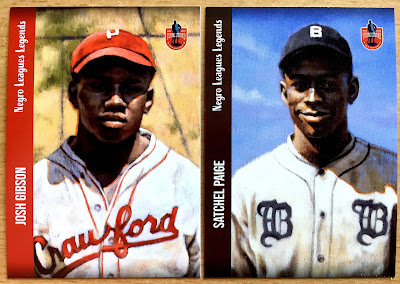 Josh Gibson, known as being one of the more powerful bats to ever play the game, looks to be built like a linebacker. Satchel Paige's smile seems to say, "I can strike you out anytime and anyplace."

Overall, I'm very pleased with this set and so happy I was able to add it to my collection. If you'd like to add one to your collection here's the link to the website.

I can't wait to get these cards into pages and then really dive into the artwork and the player biographies.