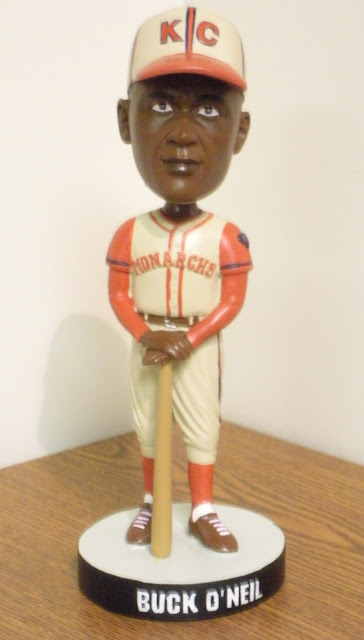 Bobblehead #10
Name: Buck O’Neil
Position: Manager
Team: Kansas City Monarchs
Description: 7.25 inches tall; standing with hands on a baseball bat.
Relevance: I visited the Negro Leagues Baseball Hall of Fame in January of 2008 with some friends after running the Groundhog Run in Kansas City.
How Acquired: I bought this bobblehead at the Negro League Baseball Museum.
Other Notes: Buck O’Neil was a great person and had a very interesting life in baseball.  He played fourteen seasons in the Negro Leagues, thirteen with the Kansas City Monarchs, and he took two years off for military service in the middle of his career to serve in World War II.  He later became the manager for the Monarchs and managed Ernie Banks before Ernie was the first black baseball player for the Cubs.  Soon thereafter, he transitioned to a position as a scout for the Cubs and he is credited for discovering Lou Brock.  O”Neil then became the first black coach in the major leagues.
During the later years of his life he played a pivotal role in the creation and opening of the Negro Leagues Baseball Museum.  He served on the Baseball Hall of Fame’s Veterans Committee that was in charge of selecting Negro League players to be enshrined in Cooperstown.  At ninety-four years of age he was allowed to bat in the Northern League All-Star game in 2006, which effectively gave him the title of oldest person to bat in a professional baseball game.
Buck was awarded the Presidential Medal of Freedom, MLB’s Beacon of Life Award, and MLB’s Lifetime Achievement Award.  He has a statue outside the Negro Leagues Baseball Museum in Kansas City, and a red seat has been designated the Buck O’Neil Legacy Seat at Kauffman Stadium in Kansas City.  The Royals select an individual who best exemplifies O’Neil’s spirit to sit in the seat each game.
Buck O’Neil has since passed on, but his pet project, the Negro Leagues Baseball Museum, has found new life after the MLB All-Star festivities in Kansas City this summer.  I would definitely recommend blocking out half of a day to spend roaming the museum and taking in the history.  It’s not nearly as large as the HOF in Cooperstown, but certainly worth the trip to Kansas City.