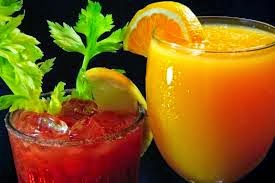 I took a ninety minute trek to the west his morning to hit the card show in the Quad Cities. Peoria only hosts one show a year and I needed to get my fix.  Besides, nothing really beats walking around an old American Legion Hall on a Sunday morning, especially one with a bingo score board on one wall and a full service bar on the other.  The dealers were joking about springing for a bloody mary or mimosa; never you mind that the bar was closed.  Now that pitchers and catchers have reported I'm in a better mood, and I think most everyone who follows baseball is as well.  It showed this morning.

I did my normal loop around the room to get a feel for where the deals were and then I dove in. My first purchase, for a shiny quarter, was the '84 Dale Murphy shown below, one of the last six cards I need. I'm working on a trade which will land me the last five cards for my 1984 Topps set.  Woo-Hoo! Three cheers for the blogosphere! 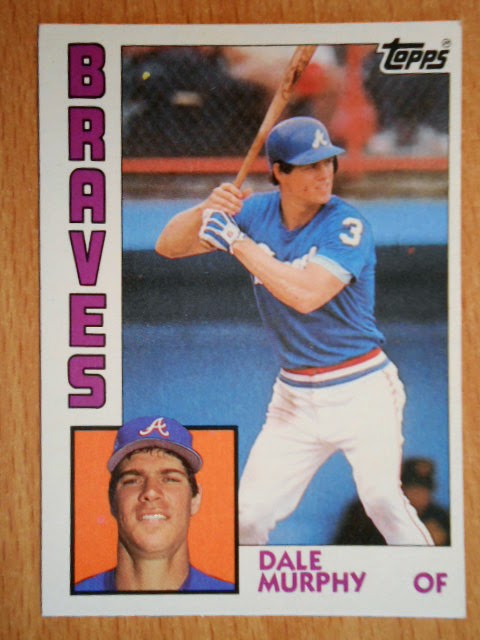 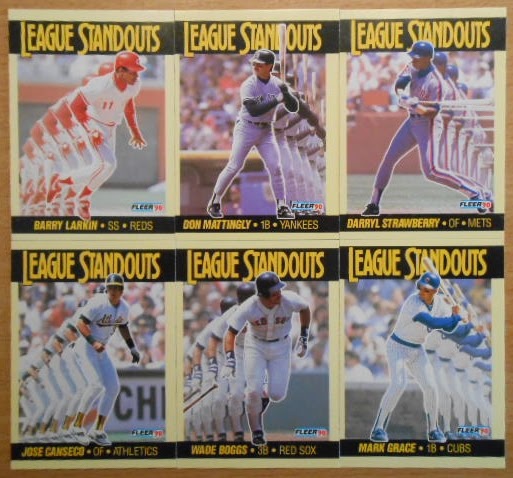 I found a dealer who had a big plastic box full of team sets & the like and it was all priced at a dollar each.  I snagged a couple interesting ones that I thought others might like as well as the 1990 Fleer League Standouts insert set (6 cards) and the 1992 Upper Deck Scouting Report insert set (24 cards).  I chose the six below because they represent the best players and/or the best pictures.  Denny Neagle has quite a mop under his hat! 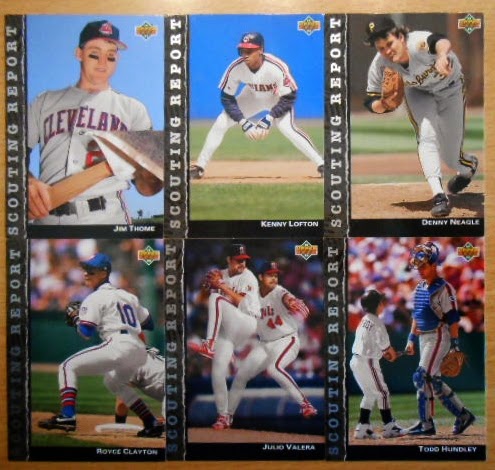 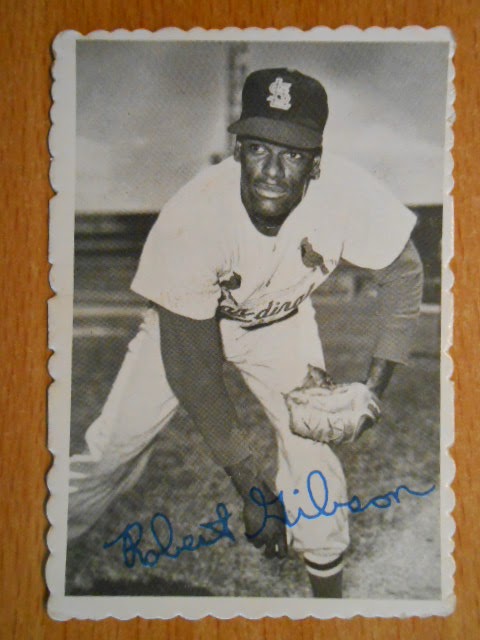 My summer plans are starting to fill up and I guess I might have a chance to meet George Brett at Kauffman Stadium.  So, I had to pick up a card that would good with an in-person autograph on it.  We'll see what happens come June. 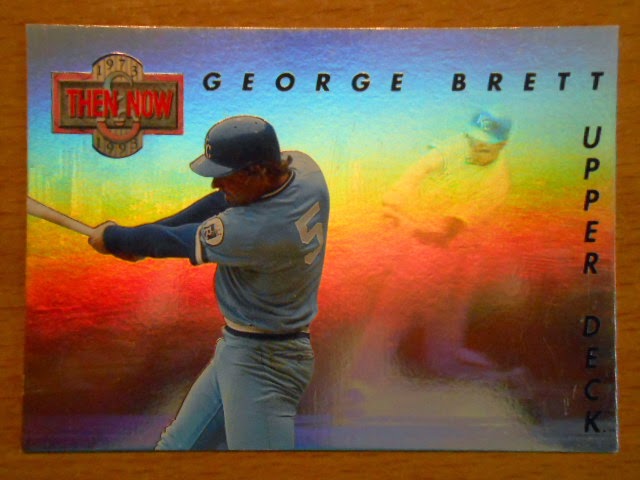 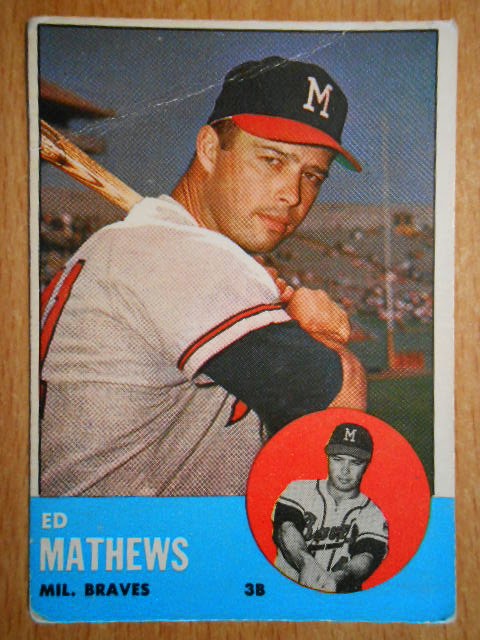 Those three words don't do much by themselves, but when you string them together... oh man!  I found the Eddie Mathews card for a few bucks in a discounted vintage bin.  Mmmmm...  cheap vintage.  Obviously, Eddie wasn't my only vintage purchase, but the rest are already earmarked for trade packages. 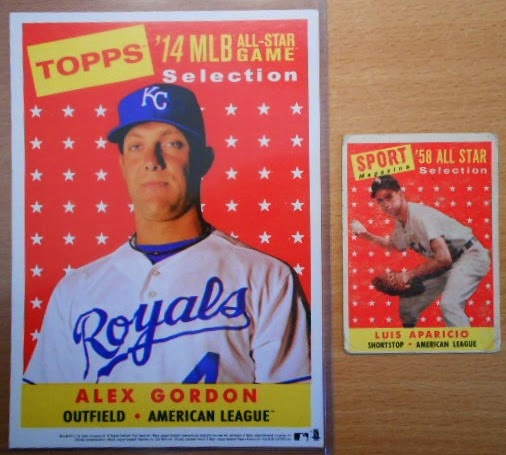 The 1958 Luis Aparicio on the right is NOT a mini, but is vintage.  That's one really big Alex Gordon card from 2014 on the left. In due time both of these cards will be sent out into the blogosphere to run free.

The last dealer I visited consistently had a crowd around his three tables.  It's not that he had much of anything different than the rest, but he was laughing, smiling, joking, and apparently cutting people deals.  I closed my QC show experience with his table, and I was happy that I did. 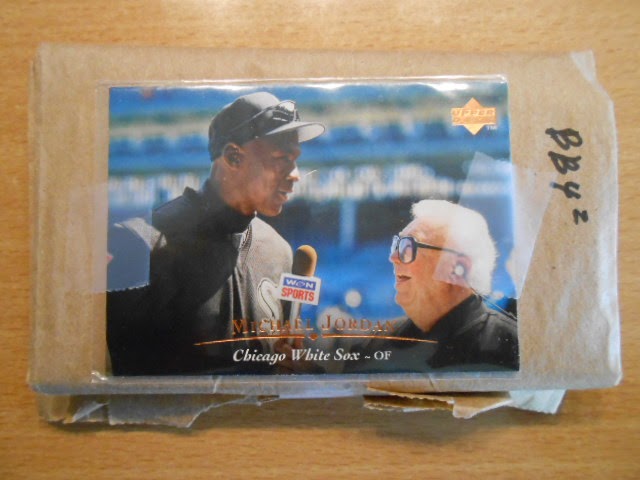 I rung up a bill of just over twenty bucks at his table and he let me have my pile for $15.  Man, I love feeling like I came away with a good deal.  I wound up purchasing one of his baseball grab bags for four bucks.  The bags were guaranteed to have an auto of relic card, plus twenty-plus other "star" cards.  The hook was that you could roll the dice.  You guys have seen the game before.  Six dice and awesome cards on numbers 6 and 36 and just plain silliness in the low twenties.  He said if I liked the card that matched my roll I could keep the card OR take the grab bag instead.  One or the other.

Gambling and baseball cards with a Let's Make a Deal twist?  Oh, the options! How could I not play?

Well, I rolled an 11, which actually is pretty low total for six dice, but the card was a Matt Forte game used jersey.  I'm a Bears fan, but I haven't purchased any football cards in over twenty years, so I took my grab bag with MJ and Harry Caray on the front.

Let's take a look at the cards from the grab bag, which will be going into the trade bin! (There were twenty-six cards total, four are not pictured.) 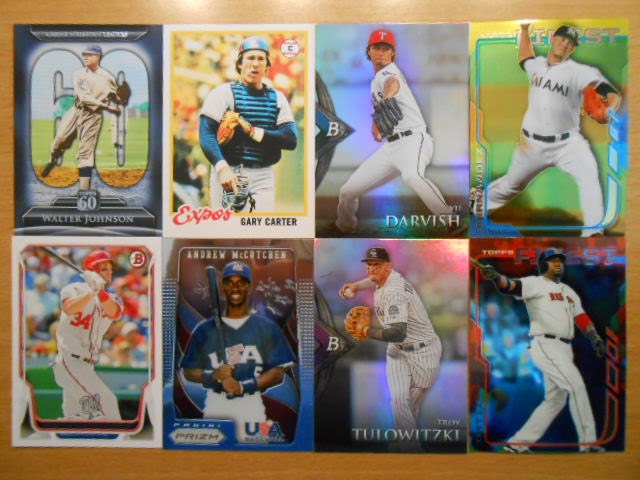 I like the McCutchen USA card from Panini Prism and the design from the most recent edition of Topps Finest.  The Gary Carter card was from the Card Your Mother Through Out insert set... sadly, not real vintage. 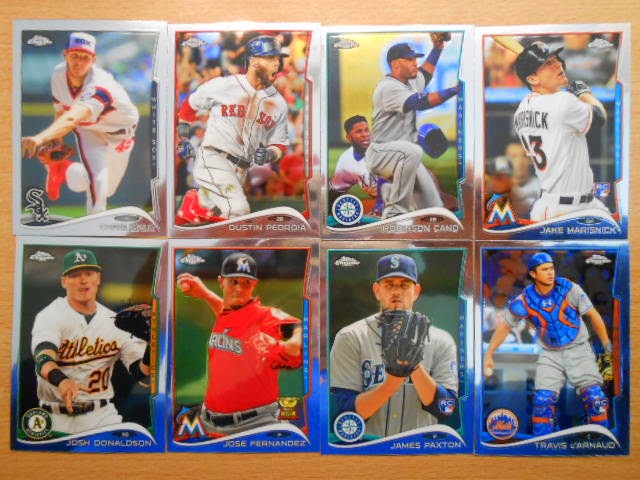 I didn't buy and 2014 Topps Chrome, but I got a couple packs worth of the stuff in the bag.  Cano, Pedroia, Sale, and Jose Fernandez?  I could have done worse. 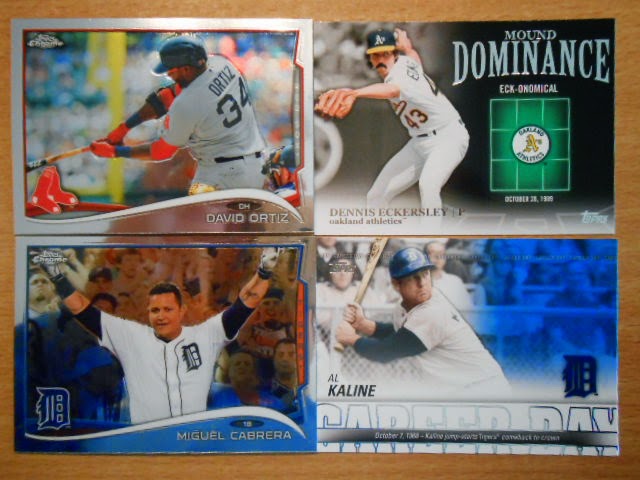 More Chrome-y goodness and a couple of inserts from 2012 Flagship.  And now for the hit: 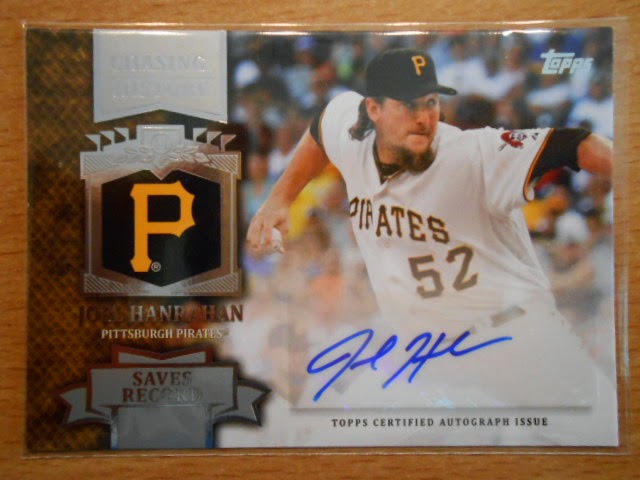 A Joel Hanrahan sticker auto.  Huh.  Hanrahan.  Beard.  Horizontal. Sticker auto?  Okay. For four bucks I think I did okay.  If nothing else I think the blogosphere will appreciate the cards.  And it was fun!