Being a teacher most certainly has its benefits.  Atop the list is an extended summer vacation in which I devolve into a character who my wife refers to as Summer Tom.  I am definitely a little bit more driven and focused during the other ten months, whereas Summer Tom can put a task off until a later date... because it's summer!

Well, I scribed a series of five posts before I went on my Colorado trip to post while I was gone.  I figured it would be nice to leave the blogosphere a few entries to read in my absence, but as a result I was inundated with trade proposals and they've been piling up on Summer Me.  Yikes!

Whelp, I have an idea of what to do with these trade packages.  I'm leaving for a trip north, to the supposedly cooler climate of Wisconsin, to enjoy a week long vacation with my wife as we celebrate our ninth wedding anniversary.  It's time to prepare another batch of posts for you to read in my stead, and I think I'll have enough trade posts to keep the blog running until I return.

Let's kick it off with my return from Superduperman99, from the Cardinal driven Fantastic Catch blog.  I shipped off some 2013 Bowman Redbirds and he sent back some Bowman FrankSet help and a few Cubs.

Let's take a look at the highlights of what Fantastic Catch tossed my way!

Silver Ice, Gold, and an International for the Frankenset!  Nice!   The Gioskar Amaya replaces the card in my base set that I had autographed at my last Kane County Cougars' game. 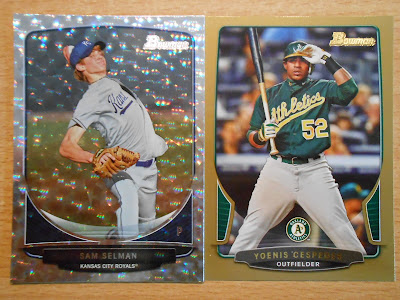 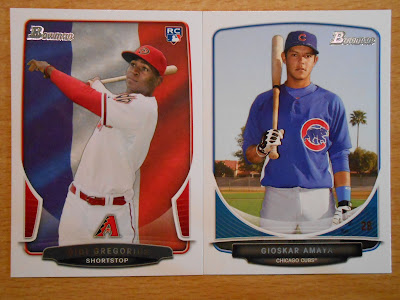 Speaking of the autograph, here it is! 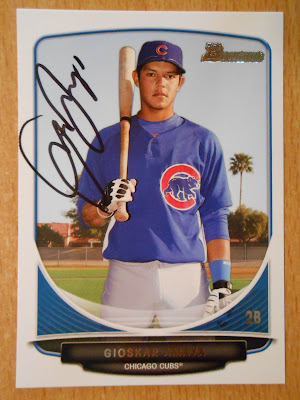 Bonus Cubs!  I love trade packages that have a little something extra enclosed, and Superduperman99 didn't disappoint with these 2006 and 2007 Fleer cards. 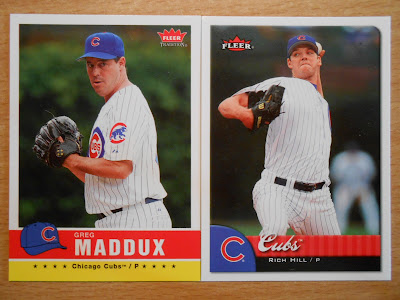 I was a big Rich Hill fan when he first came up because he was a southpaw starter who possessed a nasty 12-to-6 curveball.  It was almost as fun watching him freeze hitters as Kerry Wood.   It's too bad that injuries got in the way of what was once a promising career.

Thanks for a super trade, Superduperman99!