Like many of you in the blogosphere I walk a little faster than most on my way to the mailbox.  Discovering a yellow bubbler or a PWE in the back of my mailbox isn't a rare occurence and finding pictures of ball players on 2.5" by 3.5" cardboard inside the packages really makes this middle-aged guy smile. If nothing else, being a part of the baseball blogging community has taught me the lessons of generosity.  Sure, I made a trade for cards A, B, & C, but "Wow! I didn't expect D!"  It's no wonder that my ears are finely tuned to the engine sounds of my postman!

Well, today I broke my previous record for packages in a delivery with five.

I always open the packages whose contents I am fairly certain about.  In this case I was waiting on auctions from Ebay and Listia. 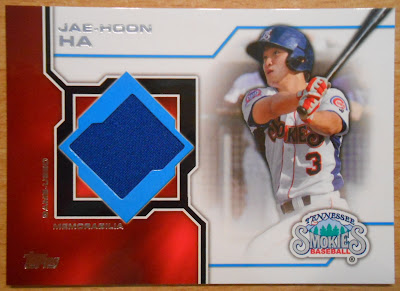 Item A, from Ebay:  Jae-Hoon Ha jersey card from 2013 Topps Pro Debut.  Ha played in Peoria back in 2010 and was a favorite of mine.  He was elected to the Futures Game in 2012, but he's not really a flashy player like a Yasiel Puig.  Yet, Ha plays the game the right way and contributes, and I look forward to him making his debut for the Cubs before the end of 2014 season.  Not bad for $1 and shipping. 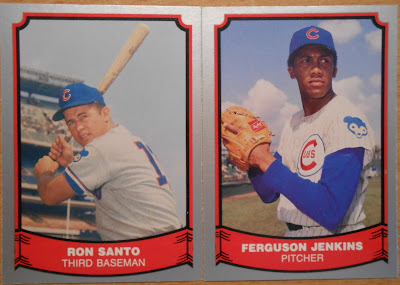 Item B, from Listia: Ron Santo and Ferguson Jenkins 1988 Pacific Trading Cards. Free cards, Woo- Hoo!  I have the Ernie Banks from this set in a binder and now I have two more Hall-of-Famers who will happily join him!

Item C, from my best friend in Texas: 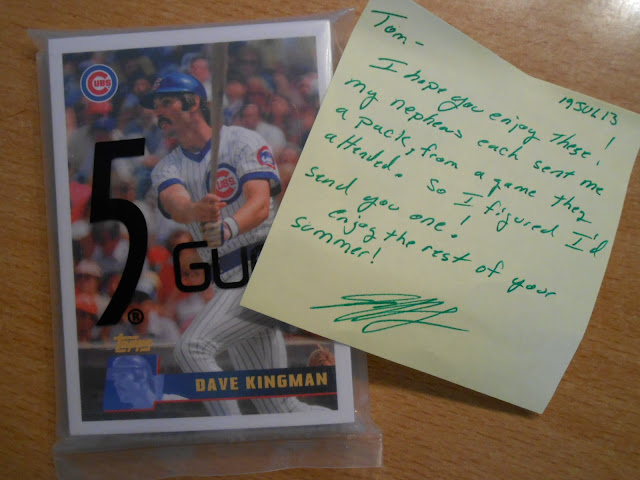 Say what?!? Whoa!  Jeff has really hooked me up here!  The twenty cards in this package were the second of four baseball card giveaways at Wrigley this season.  I had just recently come to terms with the fact that I wouldn't be able to attend any of these games even though I live within driving distance of Chicago.  And then, surprise!

Amazingly enough the cards came packaged with gum.  Boy, there's a blast from the past. 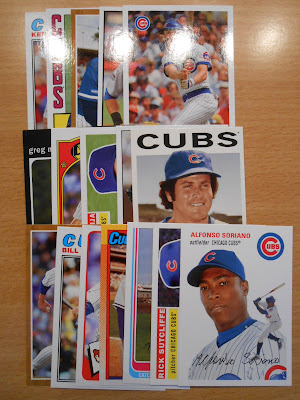 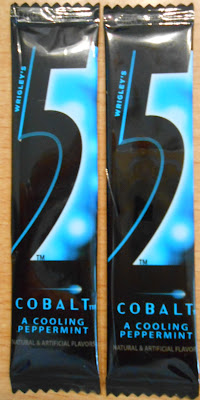 I won't show you all the cards, because you can find them all laid out in their glory at Wrigley Wax, but here are my three favorites!

By default, I love anything Santo.  That's one of my favorite shots of Kerry Wood.  And lastly, those '72 Topps are slowly growing on me.

For the record, Steve Stone and his puffy hair almost made the cut.  You can see what I'm referencing in the above picture... he's peeking over the top of Soriano.

Well, I'm going to cut this one short.  I know, I know.  I received five packages and I've only shown off the goods from the first three.  Patience, my friends.  The other two are trade packages from members of the blogosphere and I'd like to give each one their own post.
Thanks for stopping in today!